Home/February 2018, Opinions/Islam Must Be Stopped If Western Civilization Is To Survive

Islam Must Be Stopped If Western Civilization Is To Survive

What complicates matters is that there is no way of knowing which of the dozens of at-each-other’s-throat sects is the legitimate Islam. As soon as Muhammad died, his religion of peace became a house of internal war: jockeying for power and leadership started, sects formed and splintered into sub-sects, and bloodletting began in earnest.

The internal infighting in Islam is presently playing in full color – in red – most dramatically, in the Iraq and Afghanistan and other Islamic theaters. Shiite raid Sunni civilians, slaughter them like sheep, and toss their bodies like trash in the streets or the rivers. The Sunnis return the favor with just as much viciousness and savagery.

Question: If this is the way these Muslims treat each other, how would they deal with the infidels if they had the chance?

Answer: These devoted followers of Muhammad would deal with the infidels exactly the way Muhammad did: behead the non-believers, take them as slaves to hold or sell, or make them pay back-breaking jizya – poll taxes.

Some may object that writings like this are little more than hate-mongering and fanning the fire that rages between Islam and the non-Islamic world. They may further play the Islamic apologists’ few, well-worn propaganda cards as evidence for their contention that Islam is not what its detractors claim. 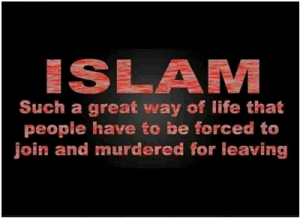 Here are the few favorite cards:

♦ “There is no compulsion in religion,” says the Quran. (But the full context is never shown.)
♦ Islam means “peace,” so Islam is a religion of peace.
♦ “For you, your religion, and for me, my religion,” Muhammad reportedly said.

The Muslims and their apologists quickly run out of their few cards, and the rest of the Islamic deck is all about intolerance, hatred and violence toward the infidels, toward all others who are not true Muslims, and even toward those who consider themselves Muslims. Shiites, for instance, judge the Sunnis as traitors to Islam, and Sunnis condemn the Shiites as heretics. Each side deems the other worthy of death and hellfire.

This internecine Islamic war of the religion of peace is not confined to the Shiite-Sunni divide. There are so many internal divisions within each side that listing and describing them comprehensively would be an encyclopedic work.

So, who is right? What are the facts about Islam and how does Islam impact the ever-shrinking village Earth and its inhabitants? Admittedly, this is a huge question and cannot be answered satisfactorily in one article. However, some facts can be presented to help the reader decide.

There is no need to belabor the point that Islam is not, and has never been, a religion of peace. The word Islam is derived from taslim, which purely means “submission,” while the term for “peace” is solh. Another derivation of the word taslim is “salema”, which means “good health” and so on.

Irrespective of what the term Islam may mean, the facts on the ground conclusively demonstrate Islam’s violent nature from its very inception. No need to go back to the time of Muhammad and examine the historical records. Just a few contemporary events should make the point.

Here is a partial list: the savage Shiite-Sunni bloodletting in Iraq; the barbarism of the resurgent Taliban in Afghanistan; the genocide in Sudan’s Darfur region; the Somali killings; the Iranian mullahs’ murder of their own people and support of mischief abroad; the incessant terrorist acts of Hamas, Hezbollah and Islamic Jihad on Israel, and numerous fatwas on infidels and the apostates; the bombing of Shiite mosques in Pakistan and Iraq and the Shiite retaliation against soft, innocent and civilian targets.

Clearly, there is no place on the planet where Muslims reside that is in peace from the religion of peace. America, Spain, France, Netherlands, England, Thailand, France, India and Indonesia have already been attacked, while others, such as Denmark, have been threatened and sanctioned.

Stretching the benefit of the doubt beyond limits, one may believe that all these acts of horrors are committed by a small minority of thugs and radicals who happened to be Muslims. Fine, let us ignore all those “fringes” for now – those who are giving Islam a bad reputation. And never mind Saudi Arabia, the cradle of barbarism, fixed in formaldehyde since Islam’s inception. Also, let us overlook the dastardly Shiite fanatics presently ruling (ruining) the great nation of Iran. Iranian Shiite Hitlerists are hell-bent on wiping Israel off the face of the planet, while viciously devastating Iran’s own largest minority – the Baha’is, people universally-recognized as law-abiding and peaceful.

Islamic rules are called Sharia law or the Islamic law. Sharia law is a misnomer, for laws must be squarely based on justice and fairness to all, while Sharia law is nothing more than a primitive set of dogmata stipulated by men for the benefit of Muslim men.

Sharia law disenfranchises women from their legitimate equal rights with men; prescribes barbaric punishments such as stoning, amputation of limbs and death. Sharia law, contrary to what its advocates claim, does not limit application of its draconian provisions to Muslims only: it considers any and all disputes involving Muslims with non-Muslims also in its purview to adjudicate. Sharia law is inherently arbitrary, obsolete, and discriminatory to the extreme. Wherever Sharia law rules, injustice prevails. Non-Muslims, women, and even children are victimized by its biased and cruel provisions.

Sharia law represents a twist to the concept of Blind Justice: It is indeed blind to justice. Even a cursory examination of Sharia’s family law, for instance, proves unequivocally its blindness to justice: it makes the shameful past laws, such as Jim Crow laws, seem as paragons of fairness by comparison.

These are the conditions on the ground wherever Sharia rules. Violence of all forms is endemic to Islamic law and is not confined to any fringes. Sharia law itself is the fringe–a fringe that is oppressive, hateful of others and violent to the core. Presently, fanatical Islam is lashing out with mad fury before its own final demise. The “infidel” world has been complicit in the surge of Islamism through its mistakes, complacency, and greed.

Warning: Islam is not a religion but a political ideology which incites hate, violence, intolerance and terror. Islamists are terminators. You cannot bargain with them. You cannot reason with them. They do not feel pity or remorse, or fear. And they absolutely will not stop, ever, until all the infidels are dead or have submitted to Islam. “The only language the Islamists understand is the language of brute force.

In non-Muslim lands, Islamism, flush with Petrodollars, has been accelerating in its drive for the world Caliphate and is moving at the speed of light by building more mosques, printing more indoctrinating Islamic books, imposing more its presence in the western culture, in our schools and university campuses, bullying, intimidating and challenging more Christians and other peaceful people of faith and by using our democratic laws against us.

In the Islamdom, they can dish out insults to non-Muslims; arrest Christians, Bahia’s or the Jews just for praying. They can confiscate their Holy books and toss them in the trash. They call the Jews pigs and monkeys, and spit on anyone that isn’t Muslim. But they go into frenzies of righteous outrage at the slightest criticism of their barbaric and highly dangerous beliefs. 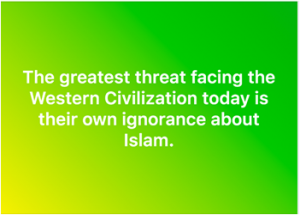 They never need to challenge the existing political order in our country, but can achieve all their goals without bothering or violating the Constitution of the U.S. because that Constitution guarantees complete government non-interference toward religion. Finally, and the most important element perhaps is the extreme coziness and appeasement by the current U.S. administration towards Islam, Muslims and radical Muslims which will recklessly and unknowingly drag the whole country and her citizens into an everlasting Islamic inferno, an inferno similar to the Islamic Republic of Iran and other Islamic terrorist countries.

A constitutional amendment must be passed quickly defining Islam as a hostile political force with a global totalitarian agenda, and as such is totally inimical to our constitution and our national security, and that further to this definition, all practicing Muslims must either renounce this cult or be deported to their countries of origin, and all mosques must be demolished, since their goal is to propagate political propaganda, which has nothing whatsoever to do with ‘religion’ – let alone one of ‘peace’. That’s going to be the final ‘solution’ for Islam in America.

“Fight and kill the disbelievers wherever you find them, take them captive, harass them, lie in wait and ambush them using every stratagem of war.” Qur’an:9:5

“Fight those who do not believe until they all surrender, paying the protective tax in submission.” Qur’an:9:29

We must also end the deadly practice of “Political Correctness.” Truth, only naked truth, can set us free. And freedom is our greatest gift of life. Life without freedom is death disguised as life. Remember Patrick Henry’s cry: Give me liberty or give me death. Humanity cannot afford, and must not ignore, the emergence of the latest threat to its very existence on this planet. We must fight for life, for liberty, for freedom and end the nightmare of Islamic hellfire.

COMING SOON: Amil’s next article “How Would Muslims Take Control Of America?”