Home/January 2021, Opinions/It is Far From Over America. We Are Only Just Beginning

It is Far From Over America. We Are Only Just Beginning

I have heard today from so many of you, panic stricken, sad, thinking that Joe Biden is our President. This is in the face of all our courts, House, Senate and media ignoring the massive voter fraud and election crimes.  As I shared with my last article and Intel from the brilliant and truthful Sydney Powell, she found that the real Electoral College numbers known from the German Dominion Servers before they were seized was Trump 410 and Biden 128.  See the chart below.

Rest assured, today’s joke inauguration of the loser and criminal Joe Biden will not be allowed to stand.  My high up sources, one directly to Trump have revealed to me in detail what is coming.  The below mentioned crimes and coming actions are bold truth that you will not hear in the media right now.  Study this carefully, share with everyone you know. Pray and watch it all unfold.  America is secure. Stand and believe. 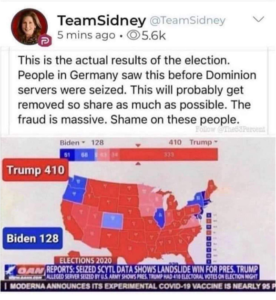 Ratcliff has confirmed that China was behind the 2020 Election Fraud. Don’t trust the CIA or FBI. We are in a war with China and would have a couple of weeks of confusion. Stay out of the way of the Military and let them do their job. They will deal with any violence, so don’t let anyone control you with fear.

Stay home and stay calm while Trump saves this country. Remember Trump really is a man of God and not a poser.  With his help, we will return to a nation under God. We are all in this together. Listen to the EBS. Listen to your heart. Bitchute.com/video/

We could be going to an Emergency Broadcast System and Martial Law which Trump enacted Sat. 2 Jan.

That broadcast would begin with Trump’s speech and continue in 8-hour segments for 72 hours. The Broadcast could very well be conducted by several Generals including General Hyten who is the highest ranking Military official and Chairman of the Joint Chiefs of Staff. We know that these 8-hour segments will be educating the American public on the truth of the massive corruption, and many criminal activities of so many key figures in our Government.

You will hear the truth of the JFK assassination where George Bush Senior was a top CIA operative coordinating the assassination in Dallas.  You will learn of the truth of the 911, also coordinated by the Bushes. You will learn of so many in our Government highly involved in Sex and child trafficking and Pedophilia, money laundering and many crimes of bribery and stealing of our tax dollars to line their own pockets.

You will learn of so much of the corruption and treasonous acts by many politicians, it will make you absolutely sick to your stomach. This will be presented by several Generals and they will explain that they have been planning for decades to take down this massive corruption. You will learn that they asked Donald Trump to run for President and help them take out the Deep State criminals.

As all this unfolds,the left and the Media will accuse Trump of being a dictator and that he ordered this military coup. Not true.

There will be about Ten Days of Darkness referring to Trump’s inability to communicate by Facebook and Twitter. This is the time that these presentations will be broadcast. You will want to watch all of them.

With all the massive evidence against the Biden’s, Obama, the Clinton’s and so many more, the Generals planning on getting our Country back will conduct the arrests and educate all Americans of the Truth behind these actions.

Lin Wood in a recent interview, asks all Americans to search their heart for the truth not the news. We will realize that we have been lied to and with the help of the corrupt news have been programed to hate President Trump. The truth is that Donald Trump, gave up his life to work with the Generals who asked him if he would help them bring down this massive corruption in all phases of our government.

We will all come to realize what a true American Patriot that Donald Trump really is and the hell that he and his family have been through for the last four years.

I know that God will Bless Donald Trump in mighty ways as history shows that he is the greatest President of all time.

All American Patriots keep the faith. For all of you who have been taken in by this massive corruption machine believing that the Democrats, Biden and the media are here to help you, snap out of it.  The very opposite is true.

Our Lord, President Trump and our amazing military will set things right and get us all back on course again.