Home/February 2019, Opinions/It’s Not The Politicians We Fear, It’s The People

It’s Not The Politicians We Fear, It’s The People

“Fear not the politician for he or she is but an identical reflection in the mirror of the people in the majority.” —Ron Ewart

THE STATE OF THE UNION:  This article is offered for free because it has no value.  It won’t reach enough people to motivate them to solve the serious problems facing our once-free Constitutional Republic that has morphed into a mob-ruled Democracy, eager to embrace socialism.  Your government (socialist/Democrats) has gone stark raving mad with an impossible-to-implement-and-fund, insane “Green New Deal.” They are lobbying for higher taxes and massive regulations, after the Trump Administration and Congress lowered taxes and reduced regulation.  The truth is, the politicians won’t save you.  Both parties intend to enslave you in one way or another.  They will take your money in whatever quantity they want.  They will pass regulations to restrict every aspect of human activity.  And you are letting them do it!

America’s borders are wide open and you are being invaded by hordes of mostly ignorant illegal alien, diseased peasants, while you pay for their keep, education and medical care ….. by force of law.  Your “elected” politicians refuse to “fix” it. Why aren’t you screaming? Those very same politicians that the “people“ elected, have corrupted health care, public education, welfare and more. Radical environmentalism has usurped most of our freedoms and property rights and your politicians let it happen when it was their sworn duty to see that it didn’t happen.  The effort to “fix” alleged climate change will break the bank, lead us straight into third-world chaos and send us back to pioneer days, without sufficient energy to light and heat our homes, or drive our cars.  The ignorant socialists that live in big cities are clamoring for it.  As we said, “it’s not the politicians we fear, it’s the uninformed people that elected the politicians.” 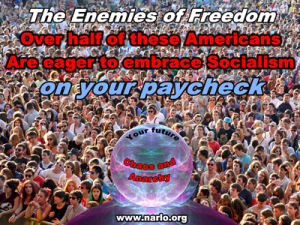 The “people” keep electing the same dolts every election cycle.  As an example, Michigan Democrat representative John Dingle just died a few days ago after serving almost 60 years (1955 to 2015) in the House of Representatives.  John’s father served two decades before him.  Nepotism is alive and well.  Dingle, the longest serving representative, was behind the passage of Medicare, Medicaid and Obama Care, all socialist programs.  His life-long dream was Medicare-for-all.  Does that sound familiar?

West Virginia Democrat Senator Robert Byrd served in the U. S. House and then the U. S. Senate.  He became the longest serving Senator in U. S. History.  Robert Byrd was a recruiter for the Klu Klux Klan while in his 20s and 30s, rising to the title of Kleagle and Exalted Cyclops of his local chapter.  After leaving the group, Byrd spoke in favor of the Klan during his early political career. Though he claimed to have left the organization in 1943, Byrd wrote a letter in 1946 to the group’s Imperial Wizard stating “The Klan is needed today as never before, and I am anxious to see its rebirth here in West Virginia.”   (source: Wikipedia) For 51 years, the people of West Virginia kept voting for this loyal and devoted KKK member.    Now they want to fire anyone who ever did “black face.”   (How did Al Jolson ever survive?)

SIDE BAR:  Six Confederate veterans (Democrats) formed the violent, paramilitary “secret society” of the KKK in December of 1865.  Its foundation was based on white racial superiority and its members were mostly Southern Democrats.  The history of the KKK was written in blood and the Democrats have those bloodstains all over their hands.  Did the KKK die?  Hardly.  There are least 42 different KKK groups alive and well in 22 states.

The above stories are only two examples.  There are hundreds more, on both sides of the aisle.  We only have the voting public to blame.

The sad reality today is, America has somehow managed to raise millions of soft, weak, wholly ignorant, spoiled brats in big cities that want everything they can get for free and politicians that can’t wait to give it to them, for their votes, stealing your money to do it.  But eventually government will run out of your money!!!!!  Then watch what happens.  The free loaders will riot in the streets, burn down cities and kill those that deprived them of their “free” largess.  Roving gangs, armed to the teeth, will steal, rob, pillage, destroy and kill everything in their path.  That is always the final chapter of socialism when the money dries up.

Every one of you reading this column is in the USS America lifeboat and the lifeboat has serious holes in its hull.  When you plug one hole, another hole appears somewhere else.  You are trying to keep your boat afloat but you are losing the battle because you aren’t doing enough.   You lifeboat is sinking and from our perspective you are going to watch your lifeboat sink into the briny deep with you in it and do very little to stop it.

The Unstoppable Force of 10,000,000 United Americans, Speaking With One Voice:

Ladies and gentlemen, the government would have to yield to the force of 10,000,000 united-in-freedom Americans.  Most of those 10,000,000 own the means of production, or are part of those means.  They produce a good deal of the money and most of them own guns.  But it will take 10,000,000 Americans or more, SPEAKING WITH ONE VOICE, to get the point across to the government and to the tens of millions of “soft, weak, spoiled brats in big cities that want everything they can get for free and politicians that can’t wait to give it to them, for their votes, stealing your money to do it.”

But alas, who is going to organize 10,000,000 or more united-in-freedom Americans that will speak loudly, with one voice and back it up with force if necessary?  No one!

Once more we re-iterate:

NOTE: After observing Americans for 81 years, most of the people still don’t get it and seem quite content to be slaves, pawns, or wards of the government!

You need not fear the politicians, only the millions of people (the mob) who elect those politicians that then act against freedom.  Representative government is dead and the people killed it because most of the people are “soft, weak, wholly ignorant and spoiled brats that live in big cities that want everything they can get for free.”

It all stacks up to be that those alleged united-in-freedom Americans aren’t going to do anything to fix what the politicians refuse to fix and they will pay a huge price for not intervening.  Sure, there are and will be a few ongoing attempts by well-meaning individuals to make a difference, but in the end their efforts will be futile, as are ours.  We couldn’t even get anyone to sign a petition to force the fraud of climate change into court.

History has shown that all these freedom-loving Americans will wait until there is no other alternative but to go to war and a thousand well-written articles a day won’t get the people off their butts to prevent that war.

So you’d better keep your head low, obey all the rules and laws, not make any waves and always live in fear of your government that can send 29 heavily armed S.W.A.T officers to your home to arrest you any time they want, as they did to Roger Stone.  You can hide, but we can’t.  It isn’t in our family’s DNA.  We came from a long line of ready-for-a-fight pioneers.

Now, if you really want to know the “State of the Union”, click HERE.

The information, suggestions and sage advice in this article were free.  So if you read the article, you’ve gotten what you paid for.