March 26, 2018, California. A ‘family’ of eight was killed when their GMC Yukon SUV plunged off a California ocean overlook cliff on the Pacific Coast Highway.

A lesbian ‘married’ couple and their six adopted children were all reportedly in the SUV and are all presumed dead. They were: Jennifer and Sarah Hart, both 39; Markis Hart, 19; Jeremiah Hart, 14; Abigail Hart, 14; Hannah Hart, 16; Devonte Hart, 15; and Sierra Hart, 12.

The lesbian couple had been under investigation by Child Protective Services in their home state of Washington. The Washington State Department of Social and Health Services identified the couple’s adopted children as “potential victims of alleged abuse or neglect.” Bruce and Dana DeKalb, neighbors of the Harts, told the Associated Press that they contacted Child Protective Services because they believed Devonte Hart was not being fed, as he had been coming over to their house too often during the past week for food. They said that the 15-year-old asked them to leave food out in a box for him, as his adoptive mothers were punishing him by not feeding him. 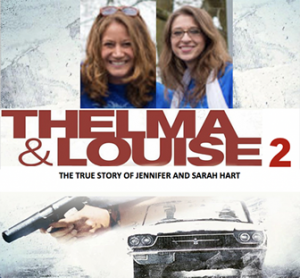 Devonte Hart, then 12, gained notoriety as the young boy who hugged a police officer at a Black Lives Matter rally in Portland, OR in November 2014.

Sarah Hart pleaded guilty to a domestic assault charge involving one of her daughters in 2011. She received a 90-day suspended jail sentence and a year of probation in 2011.

Friends and relatives said that the ‘married’ couple, Jennifer and Sarah, were loving parents who promoted social justice and involved their children in their causes. They often went to events, festivals, and rallies such as one for Democrat presidential candidate Bernie Sanders and a Black Lives Matter 2014 protest against police violence. They often went as a group wearing matching t-shirts.

Jennifer Hart posted on social media earlier in the month, on Facebook, the following quote: “I’m a better human being in every possible way for knowing these children. They have been my greatest teachers. Contrary to the notion that we can’t choose our family, we absolutely can. We choose by loving – and that’s worth celebrating every damn day.”

Initially the California Highway Patrol was confused over what caused the Harts’ SUV to plunge from the overlook.

“We have no evidence and no reason to believe this was an intentional act,” Mendocino County Sheriff Tom Allman said last Wednesday. However, he admitted that the crash scene was puzzling because “there were no skid marks, and there were no brake marks” at the roadside overlook where the car went over.

On Sunday, California Highway authorities stated that they believed that the 100-foot plunge the Harts’ took over a California cliff was intentional. The GMC Yukon stopped along the roadside about 70 feet from the edge of the cliff, the driver gunned the gas pedal and drove the SUV over the cliff, according to California Highway Patrol. An investigation revealed the vehicle’s speedometer was pinned at 90 mph and the brakes were not applied.

As a retired NY City police officer, I will now offer my politically incorrect views of what happened and opine on this story. I’m not sure if the California Highway Patrol is really that ignorant as to the suicide motivation, or if they are just too politically afraid to say what needs to be said. Perhaps if someone from the California Highway Patrol reads this article he or she can pass it along as a possible motive to offer to the press and close out the case, instead of just scratching their heads and acting clueless as to the reason behind this act. 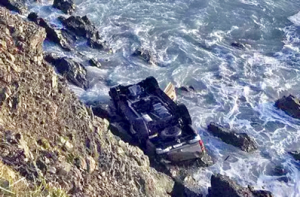 As a special protected class of citizens, feminist lesbians, all we have heard is how loving the couple was, while glossing over the fact that this couple was abusive behind closed doors to their adopted children. No one seems to be willing or able to call them what they were: abusive, mistreating, murdering feminist thugs, who killed themselves and the six young children under their care.

And what do I believe motivated this “loving couple” to commit such an act?

Watching their Bernie Sanders socialist utopian dreams dashed, followed by the defeat of Hillary Clinton, and living to see Donald Trump sworn in as President of the United States in 2017, was certainly unnerving to them.

Perhaps these two lesbians were not doing so well financially and were unemployed or underemployed, being that they seemed to have had lots of time for writing blogs on the Internet and attending social justice rallies. Financial stress may have been a contributing factor as to why they were hostile with their adopted children and sought fit to punish them through not feeding them.

Jennifer Hart recently posted on Facebook, “Contrary to the notion that we can’t choose our family, we absolutely can.” Jennifer and Sarah Hart wanted to raise their chosen family the way they desired to do so, which sometimes included physical abuse and starvation.

Knowing that the authorities were closing in on them, via the Washington State Department of Social and Health Services, they went on the run with their adopted children in their SUV.

Driven by feminist extremism and inspired by the movie, Thelma and Louise, these two lesbian heroines, Jennifer and Sarah, decided that they’d had enough of this mean, cruel, male-dominated world and agreed to check out of it. As a final act of love to their adopted children, they took them along for the cliff dive as well, as they didn’t want their adopted kids to be raised by this unfair world, where they could not get everything that the world owed them!

Jennifer and Sarah Hart pulled a Thelma and Louise in the final act of their lives.