Joy Cometh In The Morning

And Jesus going up to Jerusalem took the twelve disciples apart in the way, and said unto them,  Behold, we go up to Jerusalem; and the Son of man shall be betrayed unto the chief priests and unto the scribes, and they shall condemn him to death, And shall deliver him to the Gentiles to mock, and to scourge, and to crucify him: and the third day he shall rise again.  —Matthew 20:17-19

The High Priest and Sacrifices

In the Torah (the first five books of the Bible), Aaron is the high priest who would go into the Holy of Holies to present the offerings.  Aaron was a Levite, a descendant of Jacob’s son Levi and of the Levitical line of priesthood within the Levites. Only Aaron and his descendants were allowed inside the tabernacle to offer sacrifices.

The high priest’s vestments featured gold, an array of precious stones, and the finest materials. When entering the Holy of Holies, however, the high priest was clad in simple, pristine white linen garments. Not a touch of opulence or grandeur.  Aaron had to first cleanse himself, and thus he first made an offering for himself and his family.  This was done once a year on the Day of Atonement.

The tabernacle was a restricted area for the Israelites because God’s presence was there. God’s presence is one of holiness. Man’s presence is one of unholiness. For man to approach God, it must take place on God’s terms. Thus, the severe restrictions for entering into the presence of God.  No one was even allowed to touch the high priest prior to entering the Holy of Holies until after the offerings were made and he returned to the people.  Leviticus 10:1-7 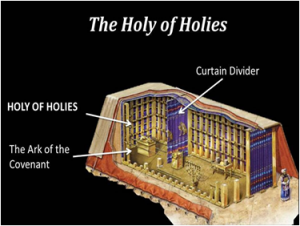 Chapter 16 of Leviticus focuses on the nature and condition of entering into the presence of the Holy One and establishes the pattern which would ultimately be fulfilled through the person and work of Jesus Christ.

Hebrews 9:7 tells us, “But into the second went the high priest alone once every year, not without blood, which he offered for himself and for the errors of the people.”

According to the Hebrew Bible, the mercy seat (Hebrew: הַכַּפֹּֽרֶת ha-kappōreṯ) was the gold lid with two cherubim beaten out of the ends of it to cover and create the space into which God would appear. This gold cover was placed on the Ark of the Covenant.

Leviticus 16:15-22 tells of the sacrifice of the bull and one of two goats.  The other goat is the scapegoat that is sent out into the wilderness to take away the impurities of the people. 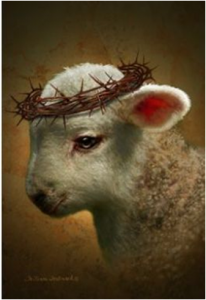 6 All we like sheep have gone astray; we have turned everyone to his own way; and the LORD hath laid on him the iniquity of us all.

7 He was oppressed, and he was afflicted, yet he opened not his mouth: he is brought as a lamb to the slaughter, and as a sheep before her shearers is dumb, so he openeth not his mouth.

For he hath made him to be sin for us, who knew no sin; that we might be made the righteousness of God in him.  II Corinthians 5:21

Mary Magdalene went to the tomb early on the first day of the week, while it was still dark and she saw that the stone had been removed from the sepulcher.  She ran to Peter and another disciple whom Jesus loved and told them that “they have taken away the Lord out of the sepulcher, and we know not where they have laid him.”

Peter and the other disciple looked into the tomb and saw the wrappings of the body strewn about.  They departed for their homes.  Mary was left there weeping and she stooped to look into the sepulcher and saw two angels in white sitting one at the head, and the other at the feet where Jesus had lain.

The angels asked Mary why she was weeping and she answered that they had taken her Lord.  She then turned and saw Jesus standing, but didn’t recognize him and He asked her the same thing.  “Woman why weepest thou? whom seekest thou?”  At first she thought he might be the gardener and asked him where they took Jesus’ body.

Jesus then said to her, “Mary.”  She turned herself and said to him, “Rabboni,” which means Master.

Jesus said to Mary, “Touch me not; for I am not yet ascended to my Father; but go to my brethren, and say unto them, “I ascend unto my Father, and your Father; and to my God and your God.”

Jesus Appears to His Disciples

The Lord appeared the evening of his resurrection day to the disciples and stood in the midst of them.  “Peace be unto you.”  He showed them his hands and side, and then said to them, “Peace be unto you: as my Father hath sent me, even so send I to you.”  He then breathed on them and said, “Receive ye the Holy Ghost.”

Thomas was not with the disciples when Jesus came, and did not believe they had seen him.  He said he wouldn’t believe it unless he could see the hand print of the nails and the injury to His side.  Eight days later, Thomas was with them, and the Lord again appeared to them.  He said to Thomas, “Touch my hands and side and be not faithless but believing.”  Thomas answered, “My Lord and my God.”

Jesus said unto him, “Thomas, because thou hast seen me, thou hast believed: blessed are they that have not seen and yet have believed.”

Later Jesus appeared to them many times and even dined with them.  Matthew 27:52 states that when Christ died, graves were opened, and many bodies of the Old Testament saints which slept arose.  After Jesus’ resurrection, they went into the holy city and appeared to many.

There is a rabbinic legend, the legend of Azazel, the scapegoat as mentioned above.  Based upon Isaiah 1:18, where Isaiah said, though your sins be as scarlet, they shall be as white as snow, it became a custom to tie a red ribbon upon the horn of the scapegoat before it was sent out into the wilderness.  Miraculously, year after year, the red ribbon always turned white, symbolizing God had forgiven the sins of Israel for that year.

The legend of Azazel goes on to say that the red ribbon stopped turning white 40 years before the Temple was destroyed, which was the year A.D. 30.  So, as of A.D. 30, the red ribbon no longer turned white.  As of A.D. 30, God no longer forgave the sins of Israel by means of these two goats because, in that year, the Messiah died and the final atonement for all was made.

Like the Levitical priests in the Aaron lineage, Jesus Christ is our high priest.  Neither the first testament was dedicated without the sacrifice of blood, and so it is for the second.  Neither by the blood of goats and calves, but by His own blood, he entered in once to the Holy place having obtained eternal redemption for us.  (Hebrews 9:22)

Jesus Christ was not from the Levitical line of priests, but from the Tribe of Judah.  He is from the priestly Order of Melchizedek.

He came “To put away sin by the sacrifice of himself.” The words “put away” are from the Greek word athetesis, which means, “to cancel or annul.” It is a strong word signifying the total annulment of sin. Its consequences are absorbed by him and thereby removed from us.

“By the sacrifice of himself” – the absolute perfection of the one offering of Christ arises from the dignity and purity of his person.

May your joy come in the morning of His resurrection.