Nothing in the Constitution has given [the judiciary] a right to decide for the Executive, more than to the executive to decide for them. Both magistracies are equally independent in the sphere of action assigned to them… the opinion which gives to the judges the right to decide what laws are constitutional, and what are not, not only for themselves in their own sphere of action, but for the Legislature & Executive also, in their spheres, would make the judiciary a despotic branch. — Thomas Jefferson

If Jefferson could see what the judiciary is doing today, he’d be denouncing them.  Benjamin Franklin served as one of the foremost architects in structuring the Constitution, and while most of the Founders were congratulating one another on their remarkable charter of liberty, Benjamin Franklin injected this note of prophetic insight. “I agree to this Constitution … and I believe, further, that this is likely to be well administered for a course of years, and can only end in despotism, as other forms have done before it, when the people shall become so corrupted as to need despotic government, being incapable of any other.”

All of this went along with Franklin’s basic philosophy of sound government; namely, that no people can remain free if they become wicked and immoral, and that certainly rings a bell today. When a society decays to the point where people begin to fear for their lives and their property (think Antifa and BLM), the demands for a police state have always been inevitable.  This is why the American people elected Donald J. Trump…he was the only candidate who truly understood what has been lost in our beloved country, and what needs to be restored…Make America Great Again. 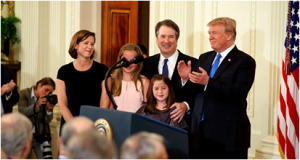 Our President has made a marvelous choice in Judge Brett Kavanaugh to replace Anthony Kennedy on the Supreme Court of the United States. President Trump introduced the Judge and said, “What matters is not a judge’s political views but whether they can set aside those views to do what the law and the Constitution require. I am pleased to say that I have found, without a doubt, such a person.”

President Trump stated he believed Judge Kavanaugh when he said, “My judicial philosophy is straightforward. A judge must be independent and must interpret the law, not make the law.”

Though firmly committed to interpreting the Constitution as written, he’s no ideologue which is why Sen. Ted Cruz and other neo-cons had been urging Trump to pick someone else.

Andy Schlafly’s brilliant tome on why Kavanaugh is a superb choice needs to be read by all American patriots, because he understands what is at stake for our country. Schlafly states, “Kavanaugh need not answer questions about the abortion issue, just as Justice Ruth Bader Ginsburg set the precedent herself for declining to answer specific questions about cases.”

Brothers John and Andy Schlafly, both of whom are attorneys, wrote a spectacular article for Phyllis Schlafly Eagles entitled, Trump Cements Legacy with Scotus Pick.  In this article they write, “The Never-Trump wing of the Republican Party does not like how Kavanaugh has long agreed with Trump on core issues.  Unlike Kavanaugh’s liberal rivals for nomination to the Supreme Court, he has participated in more than 3,800 cases and unflinchingly defended principles loathed by liberals. Kavanaugh is stellar on immigration and sovereignty, the life issue and the Second Amendment.

Judge Kavanaugh supports American sovereignty, and does not defer to international law!”  This statement alone should make you cheer for our President’s choice for Supreme Court Justice.

With important immigration-related decisions heading to the Supreme Court, including the challenge to the Obama-era Deferred Action for Childhood Arrivals (DACA), Judge Kavanaugh will provide expert insight into the legality of the program and the ability of future administrations to circumvent Congress and create tailored amnesty programs for large groups of illegal aliens.

Liberals of course are sharpening their knives against this pro-life nominee, but noted criminal defense attorney, and retired Harvard law professor, Alan Dershowitz, a constitutional scholar and frequent commentator on both CNN and Fox News, considers Judge Brett Kavanaugh to be an excellent nominee for the supreme court.

Despite stare decisis and the judges who may cling to it, with Brett Kavanaugh on the court, there is an opportunity with a 5-4 majority to reverse many of the bad court decisions.  Justice Anthony Kennedy was a moderate in legal philosophy, and thus earned himself a reputation as the court’s quintessential “swing vote” which he disdained.  However, in Kennedy’s last years on the court, he moved to the right with his decisions.  Chief Justice Roberts who has seemed to be in the ideological middle may be the court’s next “swing vote,” but that remains to be seen.

Chief Justice Roberts has already joined the four liberal justices to save Obamacare once, and all indications are that he’s unwilling to reverse Roe or any other precedent more than four decades old. (For that matter, the only justice who clearly favors junking Roe is Clarence Thomas.).

There are any number of decisions from liberal courts in the past which need to be reversed.  Pro-life Americans immediately think of Roe v Wade which should be overturned because it is not one of the federal government’s enumerated powers, just as so many other decisions by the Supreme Court belong only to the states, and should never have been decided as federal law.

Attorney Andy Schlafly has said, “You’ll hear from Moderates that ‘you can’t do that’ because it’s already been decided. But that’s all open for reconsideration now. Don’t fall for it.”

Although sedition laws are still on the books, the Warren Court effectively neutralized them on Red Monday, 1957.  Yates v. United States, 354 U.S. 298 (1957), was a case decided by the Supreme Court that held that the First Amendment protected radical and reactionary speech, unless it posed a “clear and present danger.” Link  H/T to John and Andy Schlafly.

First amendment rights give us the ability to speak against what we disagree with regarding the government.  For this reason, sedition laws are rarely enforced despite obvious sedition being rampant today against our President and his people. Sedition used to be viewed as treason, or even an act of domestic terrorism, but it’s now viewed by many as our First Amendment rights.

Of the five rights all Americans are afforded within the First Amendment, the two that protect against sedition are freedom of speech, and freedom of the press. The other three are freedom of religion, freedom to assemble peaceably and freedom to petition the government for a redress of grievances.  Too many today are not assembling peaceably, but causing property damage and personal harm, yet few are charged.

Americans have the right to a dissenting opinion, and the right to write about it and publish it if we choose. Nevertheless, we are being censored although some deny it, first Alex Jones and now those who write WordPress blogs are being shut down for “hate speech,” especially if you write about Sandy Hook.  Freedom of the press apparently only exists for liberal socialists like Sarah Jeong and her racist posts.

Prior to 1964, libel by the press against a public figure could get them sued. That all changed with the 1964 Supreme Court decision, NYTs Co. v Sullivan which was decided by the liberal Warren court in a 9-0 decision. (Chief Justice Earl Warren was appointed by Republican President Dwight Eisenhower. Another liberal followed the Warren Court, Chief Justice Warren Burger, appointed by Republican President Richard Nixon.)

This decision changed the rules involving libel that had previously been the province of state law and state courts and stated that media could lie about public figures with impunity as it was a first amendment right. A public official could recover in a libel action only if and when a court found that the libelous statement about the official was made with “actual malice”—that is, with knowledge that it was false or with reckless disregard of whether it was false or not.  This is their tortured interpretation.

The 1964 SCOTUS decision, which dealt with a civil libel action, changed the dynamics of debate in our society into the deceptive and dishonest attacks on public figures we see daily by society’s socialists.  It needs to be overturned.  The American public never gets the truth today.

And now, many websites, blogs, social medias and videos are censoring rightwing views and shutting them down.  If you feel like you’re living in Communist China, you’re not alone.  The 50-page report, “Censored! How Online Media Companies Are Suppressing Conservative Speech,” was written by Ashley Rae Goldenberg and Dan Gainor. It examines the four largest internet entities — Google, Facebook, Twitter, and YouTube and declares that their handling of political speech is “far more troubling than most conservatives realize.”  Yes, war has been declared against conservatives, and most of them don’t even realize it.

The left can lie with impunity about anyone in the public forum, but conservatives are not allowed to air their beliefs in the same way as they are charged with “hate speech.”

The ruling was seen as a significant victory for the video game industry. Several of the Court’s justices suggested that the issue might need to be re-examined in the future, considering the changing nature of video games and their continuously improving technology.

This was a 1990 decision by the Supreme Court that invalidated prohibitions on desecrating the American flag enforced in 48 of the 50 states. Anthony Kennedy mentioned this as one of his greatest decisions joining the vote to legalize flag burning in the 1989 Texas v. Johnson decision.

Justice William Rehnquist wrote a very compelling dissent which is truly a piece of history we should all read and remember when we see the flag draped coffins of American soldiers who have died in defense of our nation.

If the high court is ever to be depoliticized, nominees must show how their decision-making process reflects the virtues of self-government that lie at the heart of the Constitution.

The Senate will question Judge Kavanaugh’s views on every issue, from abortion to gun rights and how it will influence his decisions. Like nominees before him, his non-answers on future hypothetical cases will frustrate them, but that is as it should be.

Democrat Senator Chuck Schumer will try to play out the clock, pushing to delay any confirmation vote until after mid-term elections, when his odds of defeating the nominee might improve.

It’s up to Majority Leader Mitch McConnell and the White House to make sure Democrats’ belligerent games don’t derail a first-rate nominee.