CHICAGO —The black “gay” Empire actor felt he was being slighted, under-paid and not fully appreciated by his audience. He decided to up the ante by creating publicity for himself while exploiting the hoax of victimization as a black man and “gay.” Double jeopardy. To create a tsunami of sympathy would do the trick. THEN people would notice him. The next day newspaper headlines blared an incredible story.

According to his testimony, Jussie had left his apartment at 2 AM on a cold Chicago morning, to get a sandwich from a nearby deli.  First of all, who in his right mind would go out on the streets at 2 AM in Chicago?  But he did according to the story line.  Two big men were also on the streets at that moment, saw him, the story goes, realized that he was black and gay, and viciously attacked him, threw a bottle of bleach on him while yelling homophobic and racist slurs. They were also white Trump supporters sayeth he. They pummeled him and tied a rope around his neck as he staggered home. It was the hate crime of hate crimes by golly.
To prove this, a hate letter to him was displayed that had been sent earlier to the studio. A lot of things were familiar in that letter. Too familiar. It became obvious who sent it.
Interesting, according to the yarn, he left the rope around his neck as he made his way back to his apartment and plopped down on his bed. Why would he keep that rope around his neck?  A one man parade on a dark and desolate night? 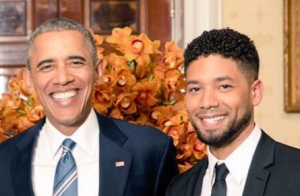 It was never made clear if he bought a sandwich at that deli. He said he did not know his attackers nor had he ever seen them before. Total strangers out looking for a black gay man at 2 AM on Chicago’s streets.  And one cannot fully comprehend why one of them would be carrying a rope at that hour of the morning.  Of course end results dictates many variations of an event.
There were two shadowed men standing next to a building on that same street seen in a video that had been found. That is who did it, no doubt. The two men were found. Both black men, brothers from Nigeria, one of whom worked in the Empire series with Jussie. The men folded under interrogation and showed the police a check for $3500.00 they had been paid to fake the “attack.”
To investigate this ‘hate crime’ attack cost the taxpayers a bunch of money. It strained the resources of the Chicago Police Department. But none of that mattered.  The only thing of importance was that this was an attack on a black sodomite simply because he was black and a sodomite, exactly what the alleged attackers  had been looking for. Everything simply fell in place.
Sixteen felonies were rightfully charged against Smollett based upon hate crimes and making a false report.  Anyone else would have been locked under the jail. But no, the shocking headlines came out yesterday. All 16 felonies against him were cancelled and he walked. What???
Lets look at some connections here; The prosecutor of this “case” was Kim Foxx that Soros money helped put into office, $408,000 to be exact. These people were connected to the Obamas.  Talk about letting the Foxx guard the hen house! But it gets even crazier.
Former Michelle Obama’s chief of staff, Tina Tchen, has now been exposed as the person who intervened with Cook County state’s attorney Kim Foxx to convince the judge to drop charges against hate hoaxer Jussie Smollett, a close friend of the Obama family.
And Jussie Smollett is Scott free with no charges or penalties for a huge hoax that has been exposed as just that, a hoax. And a very costly hoax at that.
The big question: Will Empire allow this fake back on the set to resume his career? Probably so. This episode shows everyone how to be assured of success. First of all, be black and accuse all whites of being slave owners. Make them all feel guilty.  Even so, that is only a minor advantage. You must be born black since trying to wear black face is frowned upon.
However, being “gay” is essential for success. Anybody can be that. Under the rainbow they created as their symbol, one can get by with everything. And there is no excuse whatsoever for not being ‘gay.’  It is taught in every government public school every day which gives explicit instructions on being a sodomite and the variations of alternative genders with 56 definitions. Use the wrong gender definition regarding someone, and charges will be filed against you, even arrest and jail time. We kid you not.
The mandatory LGBTQ classes in the public schools probably have a very colorful graduation ceremony. One could no doubt hear someone say, “To celebrate our graduation, join me in a toast:  BOTTOMS UP!”
Being a lifelong member of SAG (Screen Actors’ Guild) this writer considered demanding charges to be brought against Smollett for disgracing actors. That idea was  cancelled after a second thought, knowing that would empty out most of Hollywood.
ANALYZING TODAY’S NEWS FOR TOMORROW’S HISTORY
Photo Caption: It Pays to be Gay
© 2019 Austin Miles – All Rights Reserved
E-Mail Austin Miles: chaplainmiles@aol.com