Just How Bad Is The BLM?

By now many of our readers have heard that a U. S. District Court Judge in Nevada has dismissed the federal government’s case against Cliven Bundy and his two sons for an April 2014 armed standoff at the Bundy Nevada ranch between a heavy contingent of armed Bureau of Land Management (BLM) agents and hundreds of private citizens (some of them armed).  But most Americans are not aware of the details behind the case and why the BLM lost and why it was so important that the BLM lose this case.  The case reeks of federal government overreach and abuse by the BLM, and egregious prosecutorial misconduct.  The government was out to bury Cliven Bundy and his sons for daring to challenge the all-powerful federal government.  They almost succeeded.

The Bundy family for several generations have been grazing their cattle on federal land since before the turn of the 20th Century.  Bundy did not recognize federal land ownership in Nevada and paid his grazing fees to the state instead of the federal government.  Of course, the FEDS didn’t like that and took Bundy to court.  Bundy lost in federal court, twice.  Now the BLM was Hell bent on rounding up Bundy’s cattle on federal land, which led to the armed standoff in April of 2014. 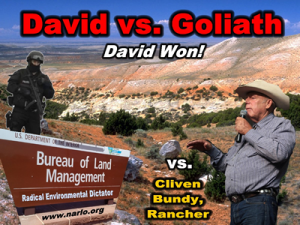 On that fateful day in April 2014, the BLM assembled a large team of armed agents to oversee the rounding up of Bundy’s cattle by a private contractor and then positioned snipers (snipers mind you) and surveillance cameras on the high ground surrounding the ranch.  What was the BLM afraid of?

Having gotten wind of the pending BLM occupation of the Bundy ranch, citizens from all over the West (some of them armed) descended on the ranch to confront the BLM “army.”  Had a shot been fired, a blood bath would have taken place on the Nevada desert that day, a blood bath that would have been unprecedented in Western history.  Fortunately, because of heavy media coverage of the event, the BLM backed down.

The 2014 event eventually ended up in the occupation by Bundy’s two sons, Ammon and Ryan, and other militants, of the Malheur National Wildlife Preserve in South Central Oregon in January of 2016 because of the BLM abuse of Oregon ranchers Dwight and Steve Hammond.  To read the full story of what the BLM did to the Hammonds, click HERE.

The Oregon Preserve occupation ended up in the assassination of Lavoy Finicum on a remote Oregon Highway by State and Federal Officers and the capture of the occupiers.  Nevertheless, a federal trial against the Preserve occupiers amazingly ended in an acquittal.

But the FEDS weren’t through with Cliven Bundy, his two sons Ammon and Ryan, and others.  Right after the Oregon Preserve occupation trial, federal officers arrested the Bundy’s and through them in a Nevada jail to await charges for the April 2014 armed standoff.  The four defendants were charged with threatening a federal officer, carrying and using a firearm, and engaging in conspiracy.  The case looked like a slam-dunk to the government.

As in most federal cases against landowners, the “deck” against the Bundy’s was heavily stacked, in favor of federal prosecutors, relying on damning evidence provided by the BLM.  Had it not been for an expose’ of the BLM by BLM special agent Larry Wooten, the Bundy’s could have gone to jail for many years.  The Title of Mr. Wooten’s report is very revealing:

“A Disclosure and Complaint Narrative In Regard to the Bureau of Land Management Law Enforcement Supervisory Misconduct, and Associated Cover-ups, As Well As Potential Unethical Actions, Malfeasance and Misfeasance by the U. S. Attorney’s Office Prosecutors from the District of Nevada (Las Vegas) In Reference to the Cliven Bundy Investigation.”

For those interested in reading the report, we have uploaded it to our website HERE.  It is fascinating reading and exposure of blatant BLM corruption.

Wooten, a BLM special investigator, spared no words when describing BLM behavior in the Bundy case.  He accused the BLM of “a wide spread pattern of bad judgment, lack of discipline, incredible bias, un-professionalism and misconduct, as well as likely policy, ethical and legal violations among senior and supervisory staff at the BLM’s office of Law Enforcement and Security.”  He further went on to accuse “BLM law enforcement supervisors of making a mockery of the BLM’s position of special trust and confidence, portraying extreme unprofessional bias that adversely affected our agency’s mission and ignoring the intent and letter of the law regarding the trial of Cliven Bundy and his alleged co-conspirators.”

The unrelenting attack on BLM corrupt behavior by special investigator Wooten could not be ignored by U. S. District Court Judge Gloria Navarro who dismissed the case against Bundy and others with prejudice, meaning they could not be tried again for the April 2014 event.

“Navarro rebuked federal prosecutors — using the words “flagrant” and “reckless” to describe how they withheld evidence from the defense — before saying ‘that the universal sense of justice has been violated’ and dismissing the charges.  Navarro didn’t buy the prosecution’s assertion that it had provided all evidence to the defense and shredded the government for a ‘reckless disregard for Constitutional obligations.’  She said she was troubled by the prosecution’s tardiness in delivering information about the government’s placing of surveillance cameras and snipers outside the ranch.”  (a quote from a Los Angeles Times article)

It didn’t used to be this way with the BLM.  Before the rise of radical environmentalism and the passage of the National Environmental Policy Act in 1969, other federal environmental acts in the early 1970’s and UN’s Agenda 21 in 1992, the BLM had a symbiotic relationship with ranchers and farmers.  The use of federal lands by ranchers for grazing and watering cattle and other livestock were handled by allotments, some of which were actually attached to a landowner’s deed and ran with the land.  The BLM worked well with ranchers on those allotments, that was until most BLM agents became rabid environmentalists, after graduating from our liberal colleges.  They were bound and determined to drive ranchers and farmers off of those allotments and went so far as to illegally round up cattle and sell them at auction (a Nevada case – Wayne Hage), or fence off water sources (a New Mexico case – Sacramento Grazing Association).  The BLM became decidedly environmentally militant, which led to the five-year incarceration of Oregon ranchers Dwight and Steve Hammond on a trumped-up charge of arson ….. and other abuses throughout the West.

With historical roots dating back to the earliest days of the nation, the BLM administers the lands that remain from America’s original “public domain.”  Created in 1946 through a government reorganization during the Truman Administration, the BLM is the successor to the General Land Office (established in 1812) and the U.S. Grazing Service (originally called the Division of Grazing and renamed in 1939).

This year (2016), the BLM is commemorating two milestone events: its 70th anniversary as an Interior Department agency, and the 40th anniversary of the principal law defining its mission: the Federal Land Policy and Management Act of 1976, commonly referred to by its acronym of FLPMA.

As the manager of more land (245 million surface acres or one-tenth of America’s land base) and more subsurface mineral estate (700 million acres) than any other government agency, the BLM carries out a dual mandate under FLPMA: that of managing public land for multiple uses (such as energy development, livestock grazing, mining, timber harvesting, and outdoor recreation) while conserving natural, historical, and cultural resources (such as wilderness areas, wild horse and wildlife habitat, artifacts, and dinosaur fossils).  In the language of FLPMA, the BLM’s responsibility is to administer public lands “on the basis of multiple use and sustained yield” of resources.

What this means, on a practical level, is that the BLM – except in areas specifically set aside for conservation purposes – must multitask to fulfill its duties.  Nevertheless, consistent with the BLM’s goal of good stewardship of public land resources, “multiple use” does not mean every use on every acre.

Today, ranchers and farmers are in a constant battle almost to the death with the BLM, the Environmental Protection Agency, the U. S. Fish and Wildlife Agency and the Department of the Interior.  Many landowners are driven out of business.  Many have committed suicide.  (That’s right, suicide)

The Wayne Hage family of Southeastern Nevada has been fighting the BLM and U. S. Fish and Wildlife Agency in court for 24 years.  They were awarded $14,000,000 by the U. S. Court of Claims but the government keeps appealing the case and the Hage’s have received not a penny after spending over $2,000,000 in legal fees, expert witnesses and court costs.  The elder Hage’s died during the long trials and now the son has taken up the family banner to pursue the case, that is if the family doesn’t run out of money first.  The government is great at stretching and delaying cases until the Plaintiff goes broke.

The federal government and all of its alphabet-soup agencies aren’t the only ones going after farmers and ranchers in America.  State and local governments, blinded by the religious cult of environmental protection at any cost, are piling layers upon layers of regulations and taxes on landowners and hiring armies of code enforcement officers to enforce those regulations.  A landowner can’t turn sidewise without bumping into a regulation or the officer enforcing the regulation.  Fines and penalties mount and many landowners go broke or end up in jail on minor offenses, you know, like collecting rain water on your land ….. without a permit.  In Washington State the State Supreme Court ruled that you can’t drill a well on your land.

Code enforcement officers show up and trespass on your land and after trespassing, hand you a laundry list of violations and steep penalties if you don’t comply.  Many jurisdictions have turned what would be civil cases into criminal cases, allowing criminal warrants and searches and seizures.  Los Angeles County created a fully armed nuisance abatement team to go after and arrest landowners at gunpoint that don’t move swift enough to correct a code violation.

You may not be a rural landowner but what happens to them, eventually trickles down and happens to you.  After all, they grow or raise the food you eat.

Ladies and gentlemen, all this is why we formed the National Association of Rural Landowners in 2005 to act as advocates for the beleaguered rural landowner.  We provide products and services to the landowner to defend against government abuse and illegal trespassing.   Over 7,000 of our powerful, legally intimidating 18″ x 24″ No Trespassing signs have been installed on rural lands all across America, blunting trespassing by government agents and law enforcement.  Our unique, one-of-a-kind Rural Landowner Handbook is only available on our website.  It could take you a couple of weeks to digest all of the vital information on the website and in the handbook, specifically designed for the rural landowner.  It’s not just the BLM that will come after you and make your life miserable, it’s all the other state and local government agencies that relentlessly pursue landowners for compliance.   Defend yourself and be on your guard, or become a victim.

If you are a rural landowner and have questions or concerns, contact us HERE.