Last week one of the most pie-eyed crazy documents ever generated by American politics—lots of competition there!—appeared on first-year Congresswoman Alexandria Ocasio-Cortez’s website. It was called “the Green New Deal”. 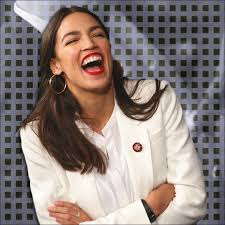 Hmmm… the link doesn’t work. This menu of lunacy appeared on Feb. 7, and by the end of the night, it had been taken down. Looks like they didn’t want you to see it; but by then millions of people had already seen it—and reacted with shock and incredulity.

Bear in mind that as of last week, “the Green New Deal”—as a resolution of Congress, not a bill—already had 70 co-sponsors in the House of Representatives, a few in the Senate, and had been endorsed by every single 2020 Democrat presidential candidate.

Here are some of its wilder provisions: all of them, admitted the sponsors, requiring “massive government intervention.” That’s a euphemism for destroying the economy and wiping out just about every vestige of freedom we can think of. Let’s just list them.

Tear down and rebuild every building in America, or at least upgrade it.

Phase out air travel and replace it with high-speed rail (to Europe?).

Government-guaranteed jobs for all. (We were not told whether you would be allowed to choose your job or the government would choose it for you.)

Universal basic income, even for persons “unwilling to work.”

All jobs to be unionized, whether you like it or not.

Ban nuclear energy, and “end all traditional forms of energy in the next ten years.”

And some of the Democrats are also toying with the idea of banning all private ownership of cars.

No wonder they didn’t want you to see it, after all.

What we’re talking about here is the self-destruction of America as we know it; and you have to wonder how many loons there are out there who would actually vote for a party that offered such a program. But even more baffling is the question of why Democrats would make this public in the first place. Are they really and truly that crazy? And by the way, they told us not to worry about the cost.

The all-inclusive rationale for these daft proposals is the boogie-man of Climate Change. They tell us the world is going to end in just twelve years unless we let them do this. The beauty of such a claim is that if the world doesn’t end, if nothing happens, they can then say “See? It worked!” We’re out our freedom, we’re living like some of the more depressing chapters of “The Hunger Games,” but at least the world’s still here.

We would love to know why Democrats believed they could get away with pitching a program that would have embarrassed Josef Stalin. Why? Are they so sure of winning the next election that they think they don’t have to pretend, anymore, to be sane? Are they so sure that our public education and university system have done such a job on us that by now we’re dumb enough, and daft enough, to go for it? Do they think the electorate is loopy enough to think the Green New Deal makes sense?

And it doesn’t even mention two more of the hottest items in the Democrats’ deluxe fun pack—“open borders” and “transgender.”

It’s an alarming thing to see—a whole major national political party stampeding off the deep end. Will massive voter fraud enable them to pull it off—to fundamentally transform America into the kind of totalitarian hell-hole that they’ve always wanted? Why have they unmasked themselves? Torn off the mask of sanity and tossed it into the incinerator. In their most feverish imaginations, do they truly believe that any of this stuff is what we want?

They’ve got something up their sleeves, and it isn’t a nice something.

But for the American people, the choice is clear and simple. Either put the Democrat Party out of business once and for all, or live with the threat of waking up some morning in Venezuela North.

I have discussed these and other topics throughout the week (plus cat videos) in my blog, http://leeduigon.com/ . Stop in for a visit. A single click will take you there.