Home/July 2021, Opinions/Just How Long Are Free Americans Going To Take It?

Just How Long Are Free Americans Going To Take It?

“Guard with jealous attention the public liberty. Suspect everyone who approaches that jewel. Unfortunately, nothing will preserve it but downright force. Whenever you give up that force, you are inevitably ruined.” —Patrick Henry, Founding Father and   American attorney, planter and politician

“The only way to deal with an un-free world is to become so absolutely free that your very existence is an act of rebellion.” —Albert Camus, French philosopher, author, and journalist

We just celebrated Independence Day on July 4th, 2021.  Perhaps in the early days of the Republic we had much to celebrate.  But in the year of our Lord 2021, the freedom for which we now celebrate is a myth …. a mirage.  We are celebrating “what” Day?  Independence you say!  Independence from what?  Certainly it can’t be independence from government tyranny.  We see no signs of that. 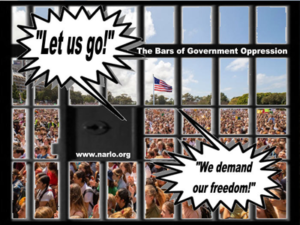 “And the rocket’s red glare ….. the bombs bursting in air ….. gave proof through the night that our flag was still there.  Oh, say does that star-spangled banner yet wave ….. O’er the land of the free and the home of the brave?”   Really?

As Francis Scott Key watched over the ramparts from his sloop, after visiting a British war ship in an attempt to exchange a prisoner during the war of 1812, he managed to hold on to his strong belief in liberty and as long as that flag still waved over Fort McHenry in the battle of Baltimore, liberty still lived in his mind and on the land he loved.   From that unreal vision, framed in chaos, Francis penned the words of our Star-Spangled Banner that we sing in tribute to our freedom, our independence and to the flag that waves proudly throughout the land.

But we in America today are not watching a foreign enemy attack one of our forts, or one of our cities with a military force, where crushing noise, death and destruction rain down on the inhabitants.  What we are watching is the very destruction of our institutions of freedom from within by leaders who are intent on tearing down and dismantling the very fabric of our freedom.

We suffer in a battle of two ideologies, freedom and liberty on the one hand, and socialism, government control and enslavement on the other.  Our country has a cancer and we must purge it now, or the cancer will grow to the point where no “medicine” will save the patient.  All future generations will be affected by what we do now to cure this cancer.

In an all-out war, the choices are crystal clear.  We need only to kill the enemy and be victorious.  But when the enemy is our own leaders, what then do we do?  We expunge our leaders and choose other one’s who will adhere to the foundation of our liberty and swear on solemn oath to preserve, protect and defend that foundation and then live up to that oath as if their lives depended on it.  Unfortunately, our mission is cloudy, as we do not know exactly what weapons to use to expunge those leaders.  Must we take action alone without sufficient resources and without those millions of Americans who have lost their way, or must we first accumulate the resources and then convince the one’s who are lost and help them back to the right path?  Or, should we instead just let the current covey of leaders have their way and allow their errors to be their own enemy and thus hasten their own demise?  These are the questions we must answer and time is of the essence.  History is recording what we do, or don’t do.

THE DECLARATION OF INDEPENDENCE STATES IT IS THE PEOPLE’S RIGHT TO OVERTHROW A TYRANNICAL GOVERNMENT, BUT IS IT?

Unfortunately, the Declaration is meaningless, dead, an empty vessel and an out-of-date promise with no teeth.  Your federal government repealed it with a law.

We are constantly subjected to the authority and jurisdiction of government, local, state and federal.  We are continuously being influenced and manipulated by the dictates, propaganda, the lying, corruption and usurious taxation by government.  We can’t move sideways without butting heads with an out-of-control, arrogant bureaucrat operating under the color of law, to get some permit or license.

Way too many of us are DEPENDENT on government for our very existence.  We, as a culture, are no longer competent, self-sufficient, self-reliant and responsible.  Some of us are, but way too few.  We have been bought, sold, conquered and enslaved without a shot being fired for a few pieces of silver and the loss of our pride and self-respect.

The truth is, America’s government has gone way beyond what King George the III imposed upon the colonies.  The people of America have allowed themselves to be enslaved by centralized government and have given up their right to freedom, liberty and independence, because they were and are unwilling to defend their freedom and liberty with whatever it takes.  The desire for freedom has been replaced with the insatiable desire for comfort and entertainment.  The people of Hong Kong have shown more courage than Americans.  But by military force Hong Kong has been silenced by another tyrannical government, China.

As we stated previously, what we celebrate on the 4th of July is a myth and an illusion called freedom.  We are not free.  As a nation, we are no longer independent and self-reliant.  In fact, most of us are so controlled by government and so dependent on government, they have slapped invisible handcuffs on each of us and confiscated our right of free choice and our right to live on our land, unfettered by government interference.  Government no longer is restrained by the limits of the Constitution, nor does it uphold the God-given, unalienable rights of the individual, as it was mandated to do by that Constitution.  We have been enslaved by millions of laws.

We believe that if the people look to government to solve their problems and acquiesce to its unauthorized power, they abdicate their duty and responsibility to control their own lives and hand it over to an aristocracy, or a king.  Having done so, they are no longer free men.  And further, their actions, or in-actions as the case may be, only encourage the government to usurp even greater power.

What America does, will determine the fate of the World.   If we forsake freedom, if we sell our sovereignty for expediency or government handouts, if we descend into the murky waters of racism and Critical Race Theory, if we break the bonds of our Constitution, if we abdicate our right and duty to defend freedom for ourselves and future generations, we shall descend into the Hell, mediocrity, apathy and self loathing under which the rest of the world operates and will be pulled down to their level, never to rise again.

Only one country on Earth has shown the best in man and what can be accomplished under the combination of unalienable freedom and our God-given goodness.  If we lose that freedom and the goodness that flourishes under it, we shall surely descend into the abyss of the evil within us, where greed and avarice are the rule, rather than the exception.  We are dangerously close.

Freedom, liberty, independence and self-reliance are our heritage.  It is those characteristics that made us one of the greatest, richest and most productive nations on Earth.  If we refuse to defend and maintain it, we condemn all future generations, including our own children and grandchildren, to a life of dependency and the chains that come with being dependent.  But even worse, we dishonor the memories and the sacrifices of all those who gave their lives, their limbs and their minds in the birth of freedom and in the defense of freedom.

So once again we ask, “Just How Long Are Free Americans Going To Take It?” before they act in their own self-interests and expunge the traitors that stalk the halls and seats of government.  “America’s traitors appear not a traitor.  They speak in accents familiar to their victims, and they wear their face and their argument.  These traitors appeal to the baseness that lies deep in the hearts of all men.  They rot the soul of a nation.  They work secretly and unknown in the night to undermine the pillars of the city.  They infect the body politic so that it can no longer resist. A murderer is less to fear.  They are the embodiment of evil and devour the flesh, bones and organs of their subjects.  They are by all accounts, incarnate death and they must be vanquished by any and all means if freedom is to be preserved.”

Perhaps now is the time to invoke “The Encirclement” or serve upon government “The Mandate.”

Read over 500 powerful conservative articles like this one “HERE.”