Sedition, the crime of creating a revolt, disturbance, or violence against lawful civil authority with the intent to cause its overthrow or destruction. And folks, this is violence, and we’ve seen it escalate to horrendous atrocities by the socialist left who cannot accept that Donald J. Trump is America’s President. 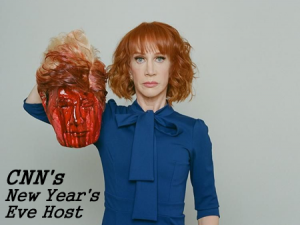 Kathy Griffin is a so-called comedian who long ago disavowed her Catholic upbringing. As a young girl, Griffin attended St. Bernadine’s Elementary School and began to develop a dislike for organized religion because of the punishments she said she received from the nuns.  Her hatred of God is obvious in everything she says and does.  And she stepped over the bounds of common decency with her latest unspeakable attack on our President and his family.

Barron Trump, the 11-year-old first son was apparently watching television alongside his mother when a photo of Griffin’s video appeared on the screen, and he allegedly panicked and started screaming, “Mommy, Mommy!”

He is 11 years old.  He doesn’t have a clue of who the demented comedian, Kathy Griffin even is…so his initial reaction to the image was that something horrible had happened to his father.

At the 2007 Emmy awards, Griffin stated in her acceptance speech, “A lot of people come up here and thank Jesus for this award. I want you to know that no one had less to do with this award than Jesus.” She went on to say, “Suck it, Jesus. This is my God now!” referring to the Emmy.

Yes, this woman thinks nothing of offending America’s Christians, our Messiah Jesus Christ, or those who voted for Donald J. Trump.  She has crossed the line of common decency into a sickness of hatred that could ultimately destroy her soul. 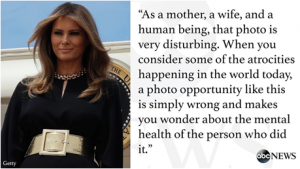 “Kathy Griffin should be ashamed of herself. My children, especially my 11-year-old son, Barron, are having a hard time with this. Sick!” Trump tweeted Wednesday morning.  He is so right, and his wife, Melania went even further.

“I Went Too Far,” Says Griffin

Griffin apologized on social media after the Secret Service suggested she will be investigated for threatening the president, and well she should be!  Her act is one of sedition.

Well, Kathy, how about apologizing to the Trump family?!  That’s something you haven’t done!  And especially to their young son, Barron.

Just because you can say something, or do something in our country, doesn’t mean you should.  You have offended Christians and the majority of the electorate with your macabre and seditious stunt…a stunt where when you apologized, you even rolled your eyes.  There are consequences Griffin, and one day you’ll see them.

Can you imagine what would have happened she had done this to our partially black President Obama?  The media would have demanded her head on a platter, her arrest, charged her with sedition, held her until trial and then sent her to prison for life.  But because our President is not one of the globalist establishment insiders, we hear little to nothing from the left, the Republican right, and even the pulpits.  All quiet on the Western front!  But the tweets are very telling…

The Decay of Societal Decency

I’ve watched the descent of common decency, of courtesy, of the once recognized standard of propriety, good taste, and modesty degenerate into tasteless flippancy. The least you can expect from society is some respect for the decencies, but the slippery slope started long ago.  Perhaps it was in the 1960s, or maybe even earlier, but now it is so obvious that society is no longer refined; it is vulgar and utterly repugnant.  Anything goes, no matter how distasteful, and that is evident by the filth spewed from Kathy Griffin.

CNN says it has cut ties with the comedian, reluctantly of course. The network said it had terminated its agreement with the comedian to appear on its New Year’s Eve programs which she’d hosted for a decade with Anderson Cooper.  I doubt this will last long.

CNN initially called her video “disgusting and offensive.” Anderson Cooper weighed in with his own reprimand, “For the record, I am appalled by the photo shoot Kathy Griffin took part in,” he tweeted. “It is clearly disgusting and completely inappropriate.”

A New Mexico casino said it has canceled a performance by Griffin. She was scheduled to perform at Route 66 Casino, operated by Laguna Pueblo, in July.

Griffin has also lost a commercial endorsement deal that she landed just three weeks ago. Squatty Potty, a Utah-based company whose products include toilet stools and other bathroom accessories, said it was suspending an ad campaign that featured Griffin.

And that’s where Griffin belongs…in the toilet, and flushed.

Where is the Outrage???

Former first daughter Chelsea Clinton was quick to express her outrage at Griffin tweeting, “This is vile and wrong. It is never funny to joke about killing a president.”  I wonder if she said that only because her father was one.  Well Chelsea, where are the rest of your leftist buds, CBS, ABC, NBC, MSNBC, David Brock, George Soros, your parents, the Obamas, etc.?  Not a peep…

Remember when CNN got a rodeo clown fired for wearing an Obama mask?  Limbaugh expounded on this today, and here’s what he said:

You would have thought that God and the Creator himself was being made fun of and laughed at and mocked. This clown, the man who wore the Obama face mask was smeared, he was targeted, he was lampooned, he was criticized, he was savaged for wearing an Obama mask, because it was sacrilegious, it was insulting, it was beyond the pale, it was over the top. 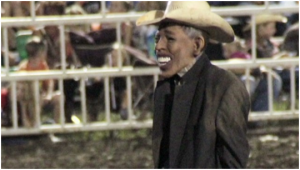 Because It’s Trump, No Big Deal

The left is tolerant of anyone who brings perversion into society and calls it normal.  Yet, they have no tolerance for those who oppose this perversion and who are appalled at the annihilation of proper etiquette and common decency towards our fellow man.

We cannot just sit around and pray, we must work.  Just as the Lord said in Ephesians 2:9 “Not of works, lest any man should boast.” And then followed it with Ephesians 2:10 “For we are his workmanship, created in Christ Jesus unto GOOD WORKS, which God hath before ordained that we should walk in them.”

We must stand for righteousness, we must stand for a Godly and decent society.  We must rebuff this filth with all of our being, and as Ephesians 6:13 states, “Wherefore take unto you the whole armor of God, that ye may be able to withstand in the evil day, and having done all, TO STAND…”

P.S.  Many hours are spent every week by researchers who write for NewsWithViews, and we do it without compensation, strictly for the love of our country.  Paul Walter, owner and editor of NWVs, spends every evening making sure our articles are uploaded and sent into your email each morning.  Keeping a website like NWVs up and running is no small project, and it does cost money.  Any donations you can send to help will be greatly appreciated.  You can send donations here.