Sometimes the people you’d take a bullet for are the ones behind the trigger. —Taylor Swift

Not everyone can be trusted. I think we all have to be very selective about the people we trust. —Shelley Long, Actress, singer, comedian

Be careful who you trust.  The devil was once an angel. —Ziad K. Abdelnour, author of Economic Warfare

We need to remember that a false friend is often more dangerous than an open enemy, and that’s surely true of both Kellyanne Conway and Mike Pence.

When President Trump chose Kellyanne as senior advisor and campaign manager, and then as Senior Counselor to the President, I thought, Uh-oh, here’s another one like Pence.

I was right.  During the Trump administration, many reporters alleged that Mike Pence and others, especially Kellyanne Conway, were leakers.  There were news stories alleging Kellyanne often had loose lips after too many adult beverages at DC parties.

And wouldn’t you know, Kellyanne and Mike are very close friends. Interestingly enough, she worked for Pence when he was a congressman and they’ve been friends for years.  Pence’s nephew actually married Kellyanne’s cousin, so there is a family connection. 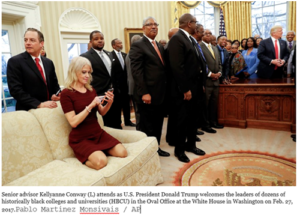 In February of 2017, Kellyanne was kneeling on the couch in the Oval Office as the photo shows, heels on and her legs bent underneath her.  She claimed she was trying to get a good picture.  I was astonished at the lack of decorum while so many guests were meeting with the president.

Most people thought nothing of it.

Kellyanne Conway is not a teenager who lacks proper comportment; she is an adult woman representing the leader of the free world while heads of historically black universities were meeting with the President.  I don’t buy her photo excuse.  This isn’t her living room, it’s the people’s house.  Dignity in the White House, and especially the Oval Office is expected from all personnel.

Her lack of class was an embarrassment, just as degrading as when Obama put his feet up on the Resolute desk.  Few people know that history.

The desk hails back from November 23rd, 1880, a gift from Britain’s Queen Victoria to President Rutherford B. Hayes. Even its construction is special. It was built with wood from the sunken Arctic Rescue Ship, the HMS Resolute.

The 1300 lb. desk was first used by Rutherford B. Hayes after his contested 1876 election.  There were wide allegations of electoral fraud, election violence, and other disfranchisement of predominately Republican Black voters. (Sound familiar?) The southern states had been told to vote Republican if they wanted northern troops removed, ending 12 years of martial law.  Hayes won by one electoral vote.  The outcome of his becoming President did result in the final effective abandonment of federal Reconstruction.

But back to Kellyanne Conway.

She worked for Ted Cruz prior to joining the campaign of Donald Trump, and disparaged Trump wholeheartedly along with Cruz who insulted Trump numerous times before finally endorsing him.  During one televised debate, Rubio and Cruz showed their lack of civility and maturity by commenting on the size of Trump’s hands.

Kellyanne and the Kochs

In June of 2017, 16 of 23 senior white house officials had ties to the Koch brothers, including Reince Priebus, Kellyanne Conway, Jeff Sessions, Mick Mulvaney, Rob Porter and Don McGahn.  Even Treasury Secretary Mnuchin helped them out with a change in tax laws.  The Trump administration was packed full of Koch brother operatives, brought in by their water boy, Mike Pence and their former consultant, Kellyanne Conway.

The Intercept wrote that, Kellyanne consulted for Americans for Prosperity’s national foundation in 2016, as well as for the Michigan and Ohio chapters of the group. Conway also served as a board member for the Independent Women’s Forum, a Koch-backed group whose goal is “increasing the number of women who value free markets and personal liberty.”

Here is a shocking list of the Trump transition team Koch beneficiaries.  There were dozens of Koch affiliates in Trump’s administration. Why? The Kochs hated Trump; Charles Koch once likened the contest between Donald Trump and Hillary Clinton to being asked to choose cancer or a heart attack.

Nevertheless, the Koch affiliates were there to help Koch Industries get what they needed from the President, and basically they did with the help of Senior Advisor, Kellyanne Conway and VP Pence.

Marc Short served in the role of Director of Legislative Affairs for Trump (before becoming Chief of Staff to Mike Pence).

Short was previously an executive at Koch Industries, a private company run by billionaire Charles Koch who has been setting up political front groups for four decades. Short went on to become President of a Koch-related dark money group called Freedom Partners from 2011 to 2016.

Peter Navarro told us the truth about Marc Short.  He said, “Marc Short, VP Pence’s Chief of Staff, worked with Pence in allowing the Big Steal to move forward – He’s “not a good guy.”

Today, Short is busy bashing Trump’s claim about presidential declassification powers and noted that Pence never operated under that premise.

Who did Kellyanne Conway actually work for?  The 45th President or Koch Industries?  Kellyanne and her Trump hating husband, George Conway are members of the Federalist Society and she made sure the Society created a list of nominees for Supreme Court Justices.  Her good friend, VP Mike Pence, made sure the Heritage Foundation also suggested nominees.  Both groups are controlled opposition.

Charles and David Koch, the latter now deceased, are anathema to Trump’s 2016 stated beliefs.  The Kochs are pro-abortion, pro-open borders (cheap labor), pro-gay marriage and pro-Constitutional Convention.  They are members of and fund the con-con promoting, American Legislative Exchange Council (ALEC), an affiliate of Heritage Foundation founded by Paul Weyrich who was the first President of Heritage.

David Koch was on the board of Trustees of Rockefeller University. Phyllis Schlafly called the Rockefellers and their ilk the kingmakers.  “Highly placed New York kingmakers,” she wrote, “work toward ‘convergence’ between the Republican and Democratic parties so as to preserve their America Last foreign policy. . .”

Koch was also on the board of Earth watch Institute, an environmental, sustainability, Agenda 21 group and the board of the globalist new age Aspen Institute formerly headed by now deceased new age environmentalist Maurice Strong.  Strong, Club of Rome member, devout Bahai, founder and first Secretary General of United Nations Environmental Programme (UNEP), was the driving force behind the birth and imposition of UN Agenda 21, now UN Agenda 2030.

Stem-cell research is supported by the Kochs and they also signed onto an amicus brief for the supreme court supporting gay rights and gay marriage.  Running as the Libertarian Party vice presidential candidate in 1980, David Koch backed a platform calling for the full legalization of abortion.

The billionaire Koch brothers 2018 ad campaign for amnesty shows they are open border, mass immigration, and mass amnesty for illegal aliens, despite opposition from the American people.  The ad pushes amnesty by using the words of the Washington, D.C. political establishment, which is unified not only on mass immigration, but also on endless free trade, and foreign interventionism.  Former House Speaker Paul Ryan was with them. Koch money even supported Andrew Cuomo as Governor of New York, who has publicly stated, “America has never been great.”

Koch Industries and Charles Koch masquerade as conservatives while financing the destruction of America and our Constitution.

Kellyanne Conway, who stepped down in August of 2020 from serving as an official adviser – said despite Trump’s efforts to fight the results, that he lost the election.

“If you look at the vote totals in the Electoral College tally, it looks like Joe Biden and Kamala Harris will prevail,” Conway told “The 19th.”  Conway admitted Donald Trump lost the 2020 presidential election –

“I assume the electors will certify that and it will be official.”

Kellyanne Conway admitted Donald Trump lost the 2020 presidential election – and added that she would work with Joe Biden’s campaign if she were asked.

The comments from the former Trump campaign manager and adviser to the president came in an interview with The 19th that aired on Friday.

The longtime Trump defender – who stepped down in August from serving as an official adviser – said despite Trump’s efforts to fight the results, that he lost the election.

There are millions of Americans who highly doubt President Trump lost the election. Vote fraud in America in nothing new, but in the 2020 election it was on steroids.  How many documented movies do we need to prove the massive skullduggery?

So many of us wrote to President Trump while he was in the White House, and more than once!  I know of no one who received a response.  Perhaps Kellyanne and Mike, or their fellow Koch members, made sure important messages were never delivered.  We’ll probably never know.

It’s doubtful Trump ever knew about the Koch Trojan Horse within his administration.  Certainly, the Koch kingpins were Kellyanne Conway and Mike Pence.

Reminds me of Ferlin Huskey’s old song…Money Greases the Wheels.