Novel Coronavirus (COVID-19) was declared a pandemic disease on March 11, 2020 by the World Health Organization.

The fact that Coronavirus-19 is a highly contagious pandemic disease is not in question, but what is in question is the world’s mass hysteria reaction to it, fueled by the Western liberal media and the globalist elites who control them. There is more to the reporting and hysteria over this mild disease than the concern for public health. This is an exercise of the New World Order globalists flexing their muscle, seeing how well they can control the masses through an over hyped orchestrated crisis, while attempting to stop the nationalist movements of Brexit in the UK and President Trump in the USA.

In the United States, President Trump was sucker punched with this pandemic, thrown a curve ball by the leftist mainstream media and the Democrat Party, who demanded that he take action to prevent this disease and find a Coronavirus vaccine. At first, President Trump 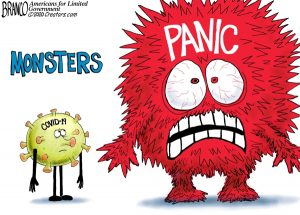 advised calm, rightly pointing out that the common flu in America averages between 27,000 and 70,000 deaths annually. However, it was too late for calm and rational thinking. The leftist mainstream media had already caused a public frenzy and had decided that this outbreak of Coronavirus had the potential to be as deadly as the Bubonic Plague.

Realizing that this tidal wave of hysteria and panic over Coronavirus could not be stopped, President Trump took swift action and created the Coronavirus Task Force and declared a national emergency on March 13, 2020.

PSALM 141:9:
Keep me from the snares they have laid for me, and from the traps of the workers of iniquity. Let the wicked fall into their own nets, while I escape safely.

Again and again and again the Left has underestimated the intelligence, resourcefulness, and resolve of President Donald J. Trump. The Left was actually hoping President Trump would bumble and/or ignore the Coronavirus doomsday prognosticators and do nothing. Then they could have blamed what would have been a likely 10,000-20,000 Coronavirus-related deaths directly on President Trump. CNN would all but certainly have had a Coronavirus death count watch ticker being constantly broadcast on their network. 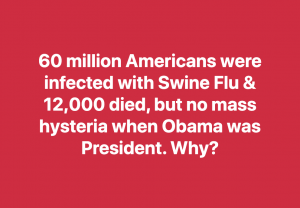 What the Left had hoped would be President Trump’s political undoing, incompetence in handling a pandemic healthcare crisis, has actually backfired on them, as the Coronavirus outbreak has demonstrated President Trump’s competence, proficiency, and leadership.

Liberal NY Governor Andrew Cuomo praised the Trump administration for their handling of the Coronavirus outbreak, saying, “And they’ve thus far been doing everything that they can do, and I want to say thank you, and I want to say that I appreciate it, and they will have nothing but cooperation and partnership from the state of New York.”

Likewise, CNN’s Dana Bash praised the president, saying, “He is being the kind of leader that people need, at least in tone, today and yesterday, in tone, that people need and want and yearn for in times of crises and uncertainty.”

On October 24, 2009, President Obama declared Swine Flu a national emergency in the United States after more than 20 million people had been infected with the disease. During President Obama’s administration, the Swine Flu infected 60 million Americans, of which 300,000 were hospitalized, and 13,000 people died from it. It is going to be hard for Democrats to sell the notion to Americans that President Trump didn’t do enough to address the Coronavirus outbreak of 2020, when many remember that the Obama administration did little to prevent the 2009-2010 Swine Flu pandemic in America, which infected nearly one in every five Americans.

The Democrat Party will do just about anything to get an abortion loving, sexual immorality promoting, open borders Democrat president elected, including causing mass panic, crashing the stock market, bankrupting industries, and bringing the U.S. economy to a grinding halt. Then they will attempt to blame the economic mess and turmoil on President Trump. It won’t work.

Republican Senator Ben Sasse of Nebraska slammed House Speaker Nancy Pelosi and her Democrat cohorts for reportedly attempting to ensure federal funding for abortion by inserting a provision to fund abortions into the Coronavirus economic stimulus plan. Democrats never cease in their desire to find ways to fund the killing of babies. 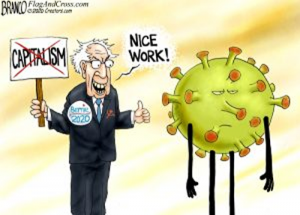 As President Trump has “played ball” with the Coronavirus alarmists, in doing so, Americans have been stripped of basic civil rights, most notably the right to peaceably assemble during this government imposed quarantine of the healthy.

“Congress shall make no law respecting an establishment of religion, or prohibiting the free exercise thereof; or abridging the freedom of speech, or of the press; or the right of the people peaceably to assemble…” -First Amendment to the United States Constitution

Is the unprecedented shutdown of entire industries, sport events, restaurants, beaches, bars, air travel, and the restriction of gatherings of large groups of people going to be the new norm in America every spring? Or is this going to only occur during springs before presidential elections when we have a Republican president? Is this an experiment and an exercise of how people will become willing and programmed to have their freedoms taken away?

There are calculated risks in all activities. We can outlaw motorcycles and we will save lives. We can outlaw automobiles and save even more lives. We can all stay indoors and save even more lives. But life is not worth living if every activity is safe and we don’t have the freedom to dream, to dare, to take risks and conquer our fears. What should have merely been government hygiene advisories on how to avoid Coronavirus has become a government and corporate opportunity to trample people’s rights, as they are routinely trampled in other countries, and bring the U.S. economy to a screeching halt. 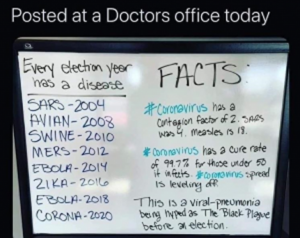 These Coronavirus restrictions are our generation’s prohibition. Just as prohibition in the 1920’s did not stop alcohol consumption in America, the American people will not be restricted in unnecessary Coronavirus quarantines for long. The Coronavirus needs to be kept in perspective.

THE SHOW MUST GO ON!

As many corporate leaders and government officials ask us to live in fear, there are signs of resistance to Coronavirus-mania. UFC president Dana White is adamant that his mixed martial arts company will not shut down due to Coronavirus fears, as the NBA and NHL did. The UFC will host events without crowds, unless the government confines everyone to their homes due to the Coronavirus pandemic.

“Unless there’s a total shutdown of the country where people can’t leave their houses and things like that, these fights will happen. We’re gonna move on. These guys will compete. We will find venues, and we will figure this thing out. I mean, the only thing that’s gonna stop us is a complete government shutdown where everyone is confined to their homes.” – Dana White, president UFC

REPORTER:
There are some, at least one White House official, who use the term ‘Kung Flu,’ referring to the fact that this virus started in China. Is that acceptable, is it wrong, are you worried that having this virus talked about as a Chinese virus…

REPORTER:
I’m not sure the person’s name… Do you think using the term Chinese virus puts Asian-Americans at risk?

When all else fails, when the Democrats and the leftist media have been beat, they revert to their fallback position of accusing President Trump and anyone else they do not like of being a racist.

Americans need to remember where they live and who they are.
America is the land of the free and the home of the brave!
America is not the land of the nanny state and of those who are afraid to go outdoors.
Coronavirus quarantines and restrictions of the healthy are un-American.

[Check out NWV’s POLL on the top left side]