Home/March 2018, Opinions/Left Lies About Wikileaks And Attack’s Me For Speaking The Truth

In the 40 years that I have spent in American Politics, I have never seen a more hysterical lynch mob than the one at MSNBC, and other “Trump Hating” fake news sites. If you read the Washington Post, Salon or Vice, they would have you believe that I am on the verge of being indicted by Special Counsel Robert Mueller for obtaining copies of the allegedly hacked DNC emails acquired and published by Julian Assange and passing them to Donald Trump and his campaign.

The drooling left-wing talking heads insist endlessly that Julian Assange, the publisher of WikiLeaks, is a Russian agent and WikiLeaks is a Russian front. Therefore, they reason that obtaining and passing such documents to Trump would be a treasonous crime.

There is only one little problem with this conspiracy theory. I never received anything from Wikileaks, or the Russians, or anyone else. I never sent Donald Trump anything. In fact, I never discussed the Wikileaks disclosures or allegedly hacked DNC emails with Donald Trump before during or after the election.

I testified for four hours before the House Intelligence Committee months ago, debunking this left-wing conspiracy theory. Unfortunately, although members of the Committee disparaged me in public session, I was only allowed to respond behind closed doors. Suggestions by the grumbling Democratic minority and amplified by Politico that my testimony was less than honest are completely and categorically false. 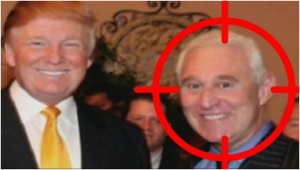 Unfortunately, virtually everything about this fake news fairy tale is wrong.

I never communicated with candidate or President Donald Trump regarding the WikiLeaks disclosures and the DNC emails, before, during, or after the election. The claim by the Democrats and some of their vicious handmaidens in the media does coincidentally jibe with the charges in a phony harassment lawsuit filed by an Obama approved front group, falsely accusing Donald Trump and me of receiving material hacked by the Russians and providing it to WikiLeaks (sound familiar?). The entire front line of Deep State criminals, including Ex-CIA head John Brennan and NSA perjurer James Clapper, filed an extraordinary ‘friend of the court” brief harping on Russian interference in our election… but never proved I had anything to do with it. Silly Rabbits! 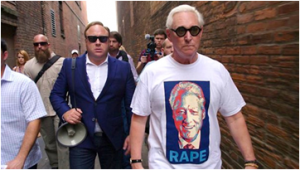 The Greek chorus of left-wing fanatics led by MSNBC’s Ari Melber and whipped into a frenzy by over -the hill -Trump hater Tom Brokaw, the New York Times Michelle Goldberg and neocon Bill Kristol generate nothing but disinformation and lies. All of this hand-waving is designed to invite scrutiny of my records and activities by the office of Special Counsel Robert Mueller. No Russian…. or Wikileaks collusion will be found.

On January 20th, 2017, the New York Times reported in a page one story that I, as a longtime associate and advisor to Donald Trump, had been subject to a FISA warrant by which the FBI monitored my communications. The New York Times has never retracted this story, so I have operated under the assumption that all my communications including emails, text messages and phone calls have been monitored. They will yield no evidence of Russian collusion or collaboration with WikiLeaks or Julian Assange.

I essentially punked the Democrats and the media by carefully following the public pronouncements of Assange and WikiLeaks, mirroring them in my own postings. As Assange himself has said, Roger Stone never wrote or tweeted anything we hadn’t already said publicly.

This new assault on me is a naked attempt to twist the facts, because I so get under the skin of the “never Trump” media elites. It’s also meant to serve as a backdrop of lies for the harassment lawsuit that Donald Trump and I are fighting in front of a liberal judge in Washington D.C.

The Stone haters know that fighting this litigation, as well as dealing with any potential inquiries from the Special Counsel, will cause me hundreds of thousands of dollars in additional legal fees. Jousting with the House and the Senate Judiciary Committees racked up $497,000 in legal fees alone!

This harassment by the media and this expensive but bogus lawsuit are literally designed to bankrupt me and distract me from the coming fight by Special Counsel Robert Mueller and the Democrats in Congress to remove our President.

Clearly this is an attempt by the President’s critics to re-inflate their now discredited “Russian collusion theory.” They do this to distract from the growing evidence that the Obama Administration, the Obama Justice Department, and the FBI used evidence they knew was fabricated and paid for by Hillary Clinton/DNC. This was the basis for the phony rationale to “legally” justify spying by the State on the Republican candidate for President and his campaign.

I’m sure you have read about the decision by General Mike Flynn to sell his home in order to pay the mounting legal cost of his defense and his establishment of a legal defense fund. With these new attacks on my family, legal bills for an aggressive representation by my lawyers is projected to cost an additional $300,000. The Libtards are trying to bankrupt me.

I have been through many political battles and I have the scars to prove it. I stood with Donald Trump and his reform agenda from the beginning. I continue to believe that he has the courage, vision, and persistence to revitalize our economy, reduce our trade imbalance, seal our borders and rebuild our military strength.

As a strong supporter of the President and a friend to this cause, I hope you will consider a generous contribution to the STONE LEGAL DEFENSE FUND, set up to help defray my costs. The cabal of Liberal Democratic lawyers assembled by Robert Mueller have an unlimited budget of tax dollars and are unfortunately ungoverned because the most recent Special Counsel Law has expired. Under the expired law, Mueller would need the approval of a Federal three Judge panel to extend his investigation into any area beyond the narrow scope of his charge; “Russian Collusion.”

Mueller has a license to look at anything, and the Justice Department refuses to publicly disclose the size of his budget. It is safe to say that it has wasted millions and millions of our tax dollars.

Please help, contributions of any amount are deeply appreciated. I have three more grandchildren to put through college. This financial pressure on me and my family is part of the globalists plan to silence Donald Trump’s supporters and destroy his Presidency.

Their entire “Russian Collusion” narrative grows tedious. As a person who was drawn to politics by the fervent Anti-Communism of Barry Goldwater and Ronald Reagan, and whose own relatives were mowed down on the streets of Budapest in 1956, I have no illusions about the strident totalitarianism of the Russian system and the tough tactics of Vladimir Putin. At the same time, I think war with Russia over Syria would be yet another Neocon blunder. When a nation has thermos-nuclear weapons, I am a great believer in a dialog with them.

The indictment of 13 Russians including a caterer (which means Robert Mueller literally indicted a ham sandwich) who the Special Counsel knows will not be extradited from Russia to face trial is a joke. The somewhat inept and contradictory social media campaigns that have not been connected in any way to Donald Trump or the Trump campaign are not evidence of “Russian collusion.”

It was reminiscent of the “Show Trials” the Russians used to hold. More than half of the Russian money for internet promotions appeared to have been spent after the elections. At various times, they masked themselves as Anti-Trump, Anti-Hillary, Pro-Bernie Sanders and Pro Hillary, as well as sharing some Pro-Trump memes. Boris and Ivan were the gang that couldn’t shoot straight.

The incredible progress President Donald Trump has made, considering the deep animus for him by the ruling elites of both parties and Washington’s Permanent Establishment, including our sadly politicized Intelligence Agencies are leaking and lying to spite Trump and screw the American people.