Home/June 2020, Opinions/Let The Cops Do It. Oops! The Cops Are Gone

Let The Cops Do It. Oops! The Cops Are Gone

“We can’t pick out certain incidentals that don’t go our way and act like the cops are all bad… Do you know how bad some of these neighborhoods would be if it wasn’t for the cops?” —Charles Barkley – An African-American former basketball player

As revealed by the statista.com website, from 2017 to 2020 on average, twice as many whites were shot by police as compared to blacks shot by police.  In the broader category of homicides, Black offenders committed 52% and whites 45%.  In 2008, the offending rate for blacks was seven times higher than for whites.  Ninety Three percent (93%) of black victims were killed by other blacks.  Eighty-four (84%) of white victims were killed by whites.

From 2011 to 2013, 38.5% of people arrested for murder, manslaughter, rape, robbery and aggravated assault were black.  And yet blacks only represent around 13% of the total population.

How many white men were shot by black cops?  We couldn’t find a single statistic on this issue and yet we know that many black cops have an ingrained bias against white Americans.  They grow up with it.

For 2016, FBI statistics show that there were 8,421,481 crimes committed in the U. S.  Sixty-nine point six percent (69.6%) of those crimes were committed by whites and twenty-six point nine percent (26.9%) were committed by blacks for again, a population of only 13%.  These are the undisputed facts. 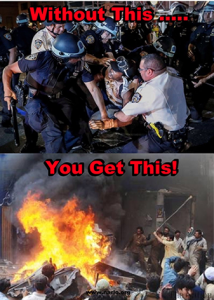 Some people, especially the news media, Black Lives Matter, academics and socialist Democrat politicians, would construe and have construed from this that the cops are racists.  However, one could also conclude that blacks perpetrate crimes at a higher rate than whites and are more than likely to come in contact with police, or arrested, or shot by police.  Given the evidence, the latter is much more likely than the former.

To say there is systemic racism in America is not accurate and is a distortion of the facts.  And yet it is the charge of systemic racism that is the rationale behind the protests, riots, looting and arson occurring in our cities all around America.  It is also the basis for corporations to stroke their corporate conscience, or pander to their black customers, by contributing huge donations to black groups, including Black Lives Matter, a known violent group that want to kill cops.

The charge of systemic racism is also the basis for a bunch of ANTIFA and Black Lives Matter types (violent, arrogant bullies) that have seized control of several blocks of the Capital Hill neighborhood of the City of Seattle.  The bullies have made a list of demands right out of a Marxist playbook, including getting rid of the police.  The coward Democrat governor of Washington State, Jay Inslee and the equally coward Mayor of Seattle, Jenny Durkin, have capitulated to the bullies.  Durkin called the takeover the “summer of love.”  Ludicrous!

Rather than calling out the National Guard, or expelling the occupiers by a show of a large police force, the Seattle police abandoned their own precinct in the area and handed it over to the occupiers.  The mayor has called the occupiers, patriots and wants to engage in a dialogue with the bullies instead of forcibly removing them.  Evidently, these Democrat politicians aren’t aware of what happens when you give in to bullies.  (See: “Confront the Bully Or Be His Slave”)

We developed a police force in America to deal with bullies and criminals.  But what if the police are no longer there to be the serve and protect “guard” between the bully and the criminal and the general population?   In such a case what develops are chaos, anarchy, vigilante justice and every man for him self.

And why is it we are only having this race problem with black Americans.  Why aren’t the Asians and Latinos out there protesting in the streets that “Asian Lives Matter”, or “Latino Lives Matter.”  After all, aren’t these races being suppressed by White Privilege as well?   Could it be that the general black population has systemic problems of its own, like being poorly educated, a large percentage of broken homes, high unemployment and high crime rates?  Who is killing blacks?  Not the cops.  Blacks are killing blacks in their own neighborhoods by the thousands.

And what about the Jews who have suffered throughout antiquity and up to the present day, far more and far longer than blacks have suffered.  “JEWS LIVES MATTER” too, but they aren’t violently protesting in the streets and looting and burning buildings.  Have you seen some of this anti-Semite stuff?  It’s disgusting.

We have yielded to the bully and we are now suffering the consequences.  Worse than that, because of the relentless attacks on the police and from insane dictates from their Democrat handlers, have decided to drop back and punt, rather than confront the violent looters and arsonists with force.

But there is a much larger injustice in America that has nothing to do with race.  The slow, insidious assault on individual liberty and unalienable rights have been raging for at least the last 100 years or so under the flag of Progressivism (Democrats) and yet there are no massive protests, riots, looting and burning by American citizens because of that assault.   There should be but there isn’t.

Let’s talk about a real protest in the name of liberty.  Hundreds of thousands of mostly young Americans came out in sometimes-violent protests against what they believe to be systemic racism against the black race by the white population and the police.

Instead, what if normal, reasonable and prudent armed Americans (there are tens of millions of them) decided to protest the loss of their individual freedoms and did so in an organized and determined fashion.  What if say 300,000 of those normal, reasonable and prudent armed Americans (that’s all it would take) decided to convince federal and state politicians, by a show of force and a list of constitutional demands, that they were going to occupy the grounds of every state capitol and Washington DC until their demands were met.  Five thousand (5,000) armed Americans would ENCIRCLE the state capitols of every state and fifty thousand (50,000) would ENCIRCLE Washington DC.  That’s only 300,000 armed Americans forcing government to comply with their constitutional duty to preserve, defend and protect the Constitution of the United States and individual liberty, in a nation of 330,000,000 people.

Unfortunately, this is never going to happen.  There is no organization that could pull 300,000 armed civilians together in the pursuit of freedom and there is no money to fund it.

Would these 300,000 armed Americans be justified in their pursuit of freedom and liberty, just as the Colonials were justified in starting the Revolutionary War?  You bet they would, even more so than the Colonials.  However, would the federal and state governments allow this justified occupation to occur without a massive show of military force to take down the freedom-loving insurgents, in what was once a Constitutional Republic?  Not likely.

After all, the Bureau of Land Management (BLM) sent in over 200 armed agents to oversee the removal of Nevada rancher Cliven Bundy’s cattle from federal land in April of 2014 and almost triggered a blood bath between BLM agents and hundreds of armed civilians defending Bundy, in front of TV cameras.

The FEDS sent in snipers to kill Randy Weaver’s family at Ruby Ridge in August of 1992.  They killed his wife, son and dog and wounded a friend.  Randy survived to collect over $3,000,000 from the FEDS.

Again, the FEDS sent in armed military troops and a tank to take down the members of the Branch Davidian in Waco, Texas (February to April 1993) where 76 Branch Davidians died, including 25 children and two pregnant women, in a massive fire of the complex, purportedly started by the military.

Federal or state agents murdered Lavoy Finicum on a lonely stretch of rural road in Oregon on January 26, 2016 and arrested the people that were with him.  Finicum, a New Mexico rancher, was a spokesperson for the group known as Citizens For Constitutional Freedom, a non-violent organization in pursuit of individual, constitutional liberty.  Finicum and Ammon Bundy’s rag tag group had just retreated from the takeover of the Oregon Malheur National Wildlife Refuge and were looking to have a dialogue with the local sheriff.  They never made it to a meeting with the sheriff because they were stopped on a lonely snowy Oregon road by heavily armed local, state and federal law officers.

So the government would oppose Americans for standing up and defending freedom and their individual rights, but they would let ANTIFA and Black Lives Matter take over a portion of a city and not lift a finger.  That is how upside down America has become under the Democrat ruling class.

If you let the bully win, whether it is ANTIFA, Black Lives Matter, or the government, you will be forever stuck with the outcome.  Take away the cops and the street bullies will have even greater power.  Let politicians take away your individual liberty and “NO LIVES WILL MATTER.”  Right now, the bully is winning in places like Seattle, Washington DC, Los Angeles, San Francisco, Minneapolis, Saint Louis, Chicago, New York and the free heart land of America.  If they win and we are all locked in virtual or real chains, we the people WILL HAVE LET THEM WIN ….. without lifting a finger.