“We live in a fantasy world, a world of illusion.  The great task in life is to find reality.”  —Iris Murdoch – Irish-born British novelist and philosopher (1919 to 1999)

If you have any doubts about the intentions of the socialist Democrats, you haven’t followed history and are purposely ignoring the facts.  Liberals intend to bury conservatives under a pile of manure so deep they won’t be able to walk, talk, or breath.  They are bent on making conservatives irrelevant and impotent.  They have almost succeeded.  The only thing that stands in their way is an incalcitrant President and tens of millions of his ardent followers.  If the President and his ardent followers succumb to the onslaught of this mindless, liberal horde, America as a free nation will be no more.  That is what is at stake, nothing less.

The battle you see playing out against Trump and conservatives, by the liberals, the establishment, the courts, the Congress, the deep state, state governors, state legislatures, the news media, academia, public school teachers, corporations, unions, internationalists and central bankers, is not about policy, it is all about who wields political power.  To the liberals, the Constitution, fundamental liberties, individual freedom, unalienable rights, capitalism, free markets, border security and sovereignty are all convenient buzzwords with no meaning.  Protecting the environment and man-caused global warming are however, their Gods and just more tools (and laws) for them to control the masses.  Their goal is absolute, perpetual political power by any means.  You are just a pawn, a serf, an indentured debt servant and a slave.  If you get in their way, they will mow you down without remorse. 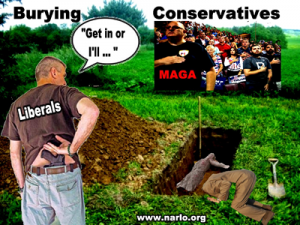 Response from a reader:  “You blithering idiot!  It’s THE REPUBLICANS in Washington, especially our illegitimately and fraudulently elected, phony “president” Trump and his crime syndicate, masquerading as an administration, who should be impeached and thrown out of office!“

This cabal of a false ideology with no foundation in liberty, that has consumed the body politic for several generations, is now backed up by the votes of a brainwashed urban majority. Liberals don’t intend to compromise with conservatives, they intend to shove this false ideology down the throats of all that don’t believe as they do, in a pattern not unlike radical Islam.  If conservatives don’t capitulate, liberals will hammer them, beat them down, call them dirty names and violently attack them.  They will discredit them, demean them and vilify them and they will do it with the help of the establishment, the courts, the Congress, the deep state, state governors, state legislatures, the news media, academia, public school teachers, corporations, unions, internationalists and central bankers.

The American news media is directly and openly complicit in the effort by liberals to silence conservatives.  So are the large tech giants like Google, Facebook and Twitter that contribute to liberals in super percentages.  Academia is an integral part of the effort to squelch all conservative principles and ideology.  In fact, these three powerhouses of political and educational influence are aiding and abetting the overthrow of our Constitutional Republic and by their actions, are guilty of treason.  They, by their word and deed, are exercising a silent coup against liberty itself.  They are the enemy of freedom!

Then ask yourself why are they suing the government over a single question on the 2020 census?  That single question just asks if the person is a citizen of the United States.  Seems logical doesn’t it?  But the Democrats fear that illegal aliens won’t answer the question or fill out the form and therefore will not be counted.  If they are not counted, Democrats stand to lose billions from federal tax apportionments to Democrat or sanctuary states and diminish their representation in Congress.  If they lose representation in Congress, they lose power and losing power is totally unacceptable to the Democrats.  Why do you suppose they are fighting Trump tooth and nail by any means, legal or illegal?  They are afraid he might be successful and reduce their power over the people even more.  They are afraid that they might finally be exposed for what they are all about ….. power above principle!

It is a battle of wills and votes and anyone who thinks that this battle will somehow evolve into a spirit of human kindness, cooperation, compromise and empathy, are misreading the tealeaves.   This is a battle for the very heart and soul of a nation.

In response from a reader who took exception to our most recent article, he wrote this:

“After reading your article and now your response to my letter I see a big label reading,  “burned out”.  May I suggest at least six months on a sunny beach sipping preferred liquid refreshments, listening to simple music and smiling at the girls.  The world will still be here when you come back.  I seriously do not want to read any more articles by you for at least six months.  You need to recharge your batteries.  Just consider this as advice from a friendly reader.”

Like millions of Americans and this reader, somehow they think that the John Birch Society, or a John Galt (from “Atlas Shrugged”), or the Heritage Foundation, or some other savior will come along and make things all better again.  Some believe in the fantasy that only God can help and wait for a sign from the heavens.  Too many think that if they could just vote for and elect the “right” person, all will be well.  They erroneously think that there has to be a simple fix to all of our problems and it won’t cost anything.  They won’t have to get their hands dirty, or spend any money and they can do it right from their own living room watching TV.  Or, all they have to do is right a letter to the editor, or call their congressperson, senator, or state legislator with a gripe.  They then can tell themselves they did their part ….. for freedom.

We don’t write these articles to tell you what you want to hear.  We write them to expose the truth and the inescapable realities.  It is our hope that eventually enough people will accept these realities and act upon them, in great numbers.

We don’t need to be re-charged as the above reader admonished.  We’re not “burned out“, we’re charged up and ready for a fight.  The lives of our children and grandchildren hang in the balance.  If we-the-living will not fight, then we condemn our children and grandchildren to a steadily degrading standard of living and less and less freedom.  Besides shared misery, that is what socialism delivers.  That is what Alexandria Ocasio-Cortez’s “Green New Deal” is all about, top-down control by a few and less and less freedom for the masses.

We deal in realities, not wish lists, or biblical phrases.  The realities are staring us all in the face but many of us refuse to face the facts.  Tens of millions of Americans are content with believing that the “STATE OF THE UNION” is what a President tells us every February.  If they do believe, they live in a fantasy world.

It is all a matter of votes and when push comes to shove, the socialist side has more votes than the conservative side, especially if they all voted.  Most of those votes come out of the urban areas where over 80% of the people live, people that are highly dependent on government and highly susceptible to socialist policies.  It is that simple.  Unless you can change the mindset of tens of millions of urban people to believe in the principles of our founding, nothing will change and only get worse!  Socialism IS a fait accompli without intervention.

What we have to overcome is daunting and formidable.  It is even greater than what the Colonials had to face from the King of England in 1776.  Unfortunately, the price to overcome today’s “enemy” will be much higher.  The forces mounted against us do not attack us from across the wide expanse of an ocean.  Those forces that would destroy us live among us and they are like mindless zombies, or the walking dead, that march to the drumbeats of a socialist puppet master.  Nothing is going to change until reasonable people have had enough and re-act, either intelligently and lawfully, or in open civil disobedience, or violently ….. en masse.

Sure, we could tell you that everything is great in America, but we would be doing a disservice to our readers ….. and we would be lying.  Those who refuse to face reality are destined to become victims of that reality.

Many times we are criticized for laying out all the problems but never offering any solutions.  On the contrary, we have offered many solutions in over 500 articles, but there have been few takers.  The evil forces we need to overcome will take a corresponding equal or greater force.  With a population of 325,000,000 people and over 80% of those people living in high dense urban areas prone to socialism, that equal or greater force will have to exceed 10,000,000 (3%) united people of common determination and purpose.  Three percent of Americans defeated the British in 1776.

However, no such organization exists in America today.  There is no leader to lead such a force.   There is no money to fund such a force.  Nevertheless, if such a force, operating as a single entity as “all-for-one-in-the-defense-of-liberty“ existed, no matter what the cost, it would be unstoppable.  They could bring government and special interests to their knees.  They could overwhelm the tendencies of Presidents, Congress and state governors and legislators from violating their respective constitutions.  They could stop the un-elected bureaucracy in its tracks.  They could withhold their taxes in protest.  Can you imagine the hue and cry if 10,000,000 united Americans swamped Congress with a single message?  Can you imagine the consequences if 10,000,000 people engaged in in-your-face civil disobedience?  Can you imagine what would happen if 10,000,000 taxpayers decided to stop paying their taxes?  All Hell would break loose and you can bet that those 10,000,000 would wield immense political power to influence public policy.  Government could not put them all in jail and would have to listen.

So there are solutions, but those solutions are of such a magnitude that most people dismiss them as being a hill too steep to climb.  That’s not our fault.  The hard truth is, you can’t stop a supertanker with an outboard motor.  It follows then that you can’t stop or even slow down the giant behemoth that is the U. S. Government with an ineffective organization with too few people and too little money.  All these little freedom organizations that dot the American landscape (God bless them) are but a minor irritant to the politicians, the establishment, the deep state, the giant corporations, unions, internationalists and central bankers.  Government does not fear these small, fragmented freedom organizations and in many cases does everything in its power, by weaponizing the IRS, the EPA, or other agencies, to impede or eliminate the freedom organization’s power and influence.

Ladies and gentlemen, this IS your reality.  Progressives, liberals and socialist Democrats, with the help of the urban population, the news media and academia, intend to bury you unless you find a way to stop them.  Ignore the threat at your own peril.

All we can do, with our little outboard motor, is to help RURAL LANDOWNERS in their constant struggle against government and the environmentalists.