Linda Sarsour: An Enemy Within

I have repeatedly said in the past that being a Muslim and being American are incompatible. A Muslim is an Ummah-ist. His/her loyalty, first and above all, is to Islamic world rule and not to the country where he/she resides. By allowing Muslims to immigrate to the West, we are literary inviting the biggest enemy of mankind into our homes. Because, Muslims do not assimilate, they come here to make Islam the law of the land. 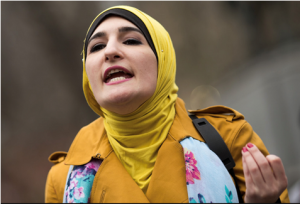 Attention seeker and jihadist Linda Sarsour, an American-born Arab native, is calling to wage Jihad, a terrorist threat against the President of the United States and the White House staff. In reality, Sarsour has declared jihad (holy war) on the United States Government and its people.

Question…Where is the Secret Service? Where is the FBI? Why is this radical Muslim woman still free to walk? Why isn’t she under investigation? This woman is dangerous and has an ulterior motive.

In her latest speech, she said the “number 1, top priority” was to “protect and defend” the Muslim community and suggested assimilation should not be a goal.

“It is not to assimilate and to please any other people or authority,” Sarsour said. “Our obligation is to our young people, and to our women, and to make sure our women are protected in our community and our top priority, even higher than those priorities is to please Allah and only Allah.”

Well folks—Christians and Jews—the overwhelming majority of the people in the United States, you need to relax about Islam. Muslims are family. They are your kindred through your shared progenitor, Abraham, so they claim.

Having Abraham as an ancestor would demand that the “children” be loving siblings. That’s the message the American Muslims try to convey. And that’s the way they aim to keep us in the deadly slumber of complacency and the delusion of multiculturalism.

For one, multiculturalism and multi-religionism are not interchangeable and are not one and the same. Muslims and their frequently well-paid apologists use the multiculturalism umbrella only in non-Islamic lands to shield themselves from the torrent of legitimate criticisms that those who know Islam better shower on this cult of violence peddled as the religion of peace.

Don’t listen to me and don’t listen to these conniving dissimulators. Find out for yourself. See if the euphemism of multiculturalism is ever even mentioned by any Islamic leader, ever printed in the Islamic press, or ever appears in any form anywhere in Muslim countries. This multiculturalism gambit is Islam manufactured wool to pull over the eyes of the non-Muslims while the Muslims carry on with their unrelenting campaign of eradicating anything or anyone non-Islamic anywhere in the world.

Those of us, through reason and a tremendous act of will, who have freed ourselves from the enslaving yoke of Islam placed around our necks from birth, know about all the heinous inside dirt of this plague on humanity.

We have experienced Islam first-hand and up close from the inside. We have studied the Quran, the Hadith, and the Sunna. We have seen Islam in action where it holds sway. Some of us have even tried desperately to cling to this security blanket that was wrapped around us from birth. Yet, the more we studied and the more we experienced Islam, the more our effort to remain in the fold became untenable.

We broke away from Islamic slavery and found it to be our solemn duty to expose this fraud of a religion, help other Muslims to free themselves from it, and warn good-hearted and gullible non-Muslims against falling prey to it.

Muslim organizations in America, generously financed by the oil-rich Muslim government and sheikhs, are directed to sell Islam Lite for long enough until the cult runs deep roots and Real Islam is introduced. One can see how the scheme played out in Europe. Much of Europe is already past the stage of Islam Lite and knee deep into the quagmire of Real Islam. And that’s exactly where things are headed in America.

It is said that truthfulness is the foundation of all virtues. Islam not only condones, it encourages, lying and dissimulation—Taqiyya — in dealing with non-Muslims. Linda Sarsour’s message is little more than packs of crafty propaganda, distortions and outright lies.

Fellow Americans: Linda Sarsour, the darling of the left, may well be an American, but she remains an enemy from within and must be treated as such, a traitor.