Listen Up Congress! No Deal On DACA

According to a May 2014 report of the Center for Immigration Studies, of the 36,000 criminal aliens who, while awaiting deportation, were set free by U.S. Immigration and Customs Enforcement, 193 had been convicted of homicide, 426 of sexual assault, 303 of kidnaping, 1,075 of aggravated assault, 1,160 for stolen vehicles, 9,187 for possession or use of dangerous drugs, and 16,070 for driving drunk or drugged. Those 36,000 criminal aliens are roughly equivalent to three-and-a-half divisions of felons and social misfits released into our midst. And this does not include the 68,000 illegal aliens against whom ICE declined to press criminal charges last year, but turned loose.  —Pat Buchanan

When you read this article, remember that our President plays chess while Congress plays checkers. 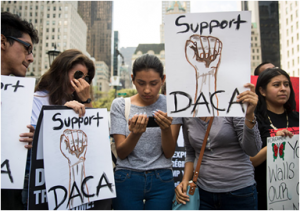 Notice the communist clenched fist, and they claim they’re here to stay despite the fact they are illegal aliens.

Congressman Steve King’s assertion that a DACA amnesty would lead to more illegal immigration is readily backed up by border-crossings in November 2017 and the rate of illegal aliens coming to the southern border when Obama was implementing the DACA program.  John Binder of Breitbart News says, “The spike in illegal immigration coincides with talks of DACA amnesty by the GOP establishment and DHS Secretary.

Yes, we want the southern border wall, and an end to chain migration and the Visa lottery system, but American taxpayers have shelled out enough of their hard-earned dollars for illegal aliens. The truth is, the cost of illegals is just too damned high in too many ways. Build the Wall, stop chain migrations, stop Visa lottery, stop anchor baby citizenship.

The anchor baby scam was invented 35 years ago by liberal zealot, Justice William Brennan, who slipped a footnote into a 1982 Supreme Court opinion announcing that the children born to illegals on U.S. soil are citizens.  Unconstitutional poppycock.

In a 2015 interview with NBC’s Chuck Todd, candidate Donald Trump said he would end birthright citizenship and “immediately terminate” Obama’s Deferred Action for Childhood Arrivals (DACA) amnesty.  After his election though, he appeared to waver on the DACA position, telling ABC’s David Muir in an interview that recipients “shouldn’t be very worried.” He added: “I do have a big heart. We’re going to take care of everybody… But I will tell you, we’re looking at this, the whole immigration situation, we’re looking at it with great heart.”

Obama enacted DACA in 2012, which provided work permits to children who were brought to the U.S. illegally.  President Trump rescinded job benefits because he was convinced former President Obama had created them illegally.

During the 2017 Labor Day weekend, President Trump felt he had only two realistic options: wait for federal courts to likely end the DACA program abruptly, or phase it out gradually by executive action and give Congress six months to devise a solution for the nearly million young people, who are no longer young, affected by his decision.  Trump wanted it done within the six months; the deadline is 5 March 2018.  The President told reporters at the White House that he had “no choice” but to order an end to the program.

The DREAM Act (short for Development, Relief and Education for Alien Minors Act) was a bill in Congress that would have granted legal status to certain undocumented immigrants who were brought to the United States as children and went to school here. Although several versions of the bill have been introduced in Congress since 2001, it has never passed, but is being talked about again.  It is the most expansive amnesty being considered in Congress and would give potentially 3.5 million illegal aliens who are shielded from deportation by DACA and those eligible for DACA a pathway to U.S. citizenship. 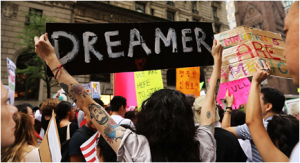 Legalizing 2 million illegal immigrant “Dreamers” would cost the government $25.9 billion over the next decade, as those now-legal people would claim more tax, education and other benefits they haven’t been able to get before, the Congressional Budget Office said Friday.  The CBO also said newly legalized Dreamers would sponsor 80,000 more immigrants to enter the country as part of “chain migration.”

Michelle Malkin, a former Trump bashing so-called-conservative wrote a fabulous article wherein she states, There is No Such Thing As a Deserving Dreamer!  She is absolutely right, they are all about “I, I, I, me, me, me, gimmie, gimmie, gimmie and deserve, deserve, deserve,” when they deserve nothing!  They are lawbreakers who are bleeding America’s taxpayers dry with their constant demands.

The Dreamers have cost American citizens billions of dollars, and we are sick and tired of paying for them.  Taxpayers have been bled dry, our debt is $21 trillion, and we hear nothing about spending cuts with the tax bill.  It’s time to get serious and protect the taxpayers because we are a dwindling breed.  Ten thousand of us retire every day, and according to the most recent tax data, 138.3 million taxpayers reported earning approximately $9.03 trillion in adjusted gross income and paying $1.23 trillion in federal income tax. There are approximately 245.3 million adults in the Unites States.  That means 107 million American adults pay no taxes.

Trump Says No DACA Without Wall

President Trump tweeted, “The Democrats have been told, and fully understand, that there can be no DACA without the desperately needed WALL at the southern border and an end to the horrible chain migration and ridiculous lottery system of immigration etc. We must protect our country at all cost!”  [Link]

What is chain migration? Essentially, it is the fastest and easiest way to gain legal entry into America, via sponsorship by a family member who’s already a legal resident or citizen of the United States. In fact, 70 percent of all immigrant arrivals in recent decades are chain migrants.

What is the Visa Lottery?  The United States issued nearly 30,000 visas to people from nations officially designated as sponsors of terrorism over the last decade through the Diversity Visa “lottery” program, the White House said last November.

According to State Department statistics, since 2007, the U.S. has admitted 20,739 individuals from Iran; 7,232 from Sudan, and 812 from Syria through the Visa Lottery program –Iran, Sudan and Syria are currently the only countries designated by the State Department as “state sponsors of terrorism.”  Recent New York City terrorist attackers were found to have been beneficiaries of either chain migration or the diversity visa lottery program. 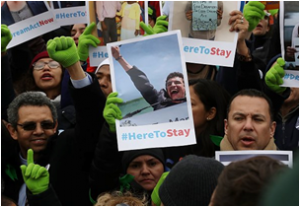 Investigative reporting has revealed that the visa lottery and chain migration have resulted in the deaths of Americans and put millions more at risk. Open borders advocates should realize that the immigration system they seek would cause more loss of American lives.  Link

The Real Cost of DACA

Jim Hoft of the Gateway Pundit reports that a recent study of DACA Dreamers found that most of these new Democrat voters reside in Republican states.  Paul Ryan, Mitch McConnell and the Democrats are determined to pass amnesty for this group of illegal aliens.  They know there are enough Dreamers to swing many red states to blue ones.

The DACA Dreamers claim they haven’t received government aid, but they have, and it’s through their U.S.-born children. U.S. taxpayers have spent billions of dollars a year for K-12 education for illegal immigrants, about 690,000 of whom have qualified for DACA.  A study by the Center for Immigration Studies showed that 62 percent of households headed by an illegal immigrant received some type of welfare.  American taxpayers have spent more than $80 billion on Dreamers.

According to the Federation for American Immigration Reform (FAIR), the cost to American taxpayers to educate English Language Learners (ELL) nationwide totaled 59.8 billion in 2016.  Believe me, I am not a fan of FAIR because it is owned by white supremacist, pro-eugenics, and population reduction proponent, John Tanton, who also owns Numbers USA.  Nevertheless, these statistics and figures are true according to the CBO.

New research has shown that DACA itself is a jumbled mess of fraud and unaccountability.

“As many as half of the approximately 800,000 people who now have work permits under DACA may have lied on their applications to get approved,” said Matt O’Brien, an attorney and until last year a manager in the investigative unit of the U.S. Citizenship and Immigration Service (USCIS).

“Based on what I had seen and what I discussed with my colleagues, the fraud rate is 40 to 50 percent. It’s possible that it was higher,” he told LifeZette this week.

So why in hell would we want to give these lawbreakers and liars free citizenship in the United States?  And why doesn’t the Trump administration know this?

DACA does not give residency status, but temporarily protects them from deportation and allows them to work legally. The protection can be revoked at any time and some of these illegals have lost their DACA protections after being arrested for vicious crimes, yet many are still not deported.

The DACA screening process is woefully inadequate. The eligibility bar was set very low, explicitly allowing people with multiple misdemeanor and certain felony convictions to be approved.  American families have lost loved ones murdered by Dreamers.

Federal immigration authorities are revealing a surge in Dreamers losing their freedom “due to criminality or gang affiliation concerns.” Officials said the number has surged 30 percent in 2017.  The U.S. Citizenship and Immigration Services said that 622 had their deferred action status pulled last year due to criminal activity.

The numbers on revocations and terminations:

DACA and every other illegal amnesty needs to be destroyed.

A Drexel University professor has openly encouraged people to destroy government property of ICE vehicles in order to stop DACA deportation.  Not only should he be charged with inciting illegal activities, but he should be fired from Drexel.  George Ciccariello-Maher teaches Global studies at Drexel University, and he made headlines last December when he tweeted out that the one thing he wanted for Christmas was “white genocide.”  This liberal ass is a white boy, so he should off himself.

Given the competitiveness of admissions, it is all the more outrageous that the University of Miami is offering Dreamers a full scholarship worth $62,000, as well as lower GPA and SAT standards. Link  The Dreamer scholarship is “renewable for up to four academic years or such time as is required to complete the baccalaureate degree.”  So, illegals who have broken the law get a free ride, while again American taxpayers take it in the arse.

To top it off, Janet Napolitano, former Sec. of Homeland Security under Obama, filed a lawsuit  protesting the phase out of DACA by the administration, declaring that it is being done by executive whim. Maybe Trump should have just had his DHS Secretary write a memo. Then they could treat it as if it were a law.

The reality is that DACA is still growing, they’re not sending their best and brightest (never have), it will cost Americans a huge amount of money, it encourages more illegal immigration, it imports crime, it helps democrats, and it is fundamentally illegitimate. [Link]

It’s up to us to stop more amnesties!

P.S.  We must fight for what is right, if we don’t, then the loss of this great nation will be on our shoulders.  The same goes for NewsWithViews.  It is up to all of us to keep the free flow of truthful information available.  Thank you for continuing to help NWVs with your monthly donations, we appreciate every one of you.  Please donate here.