The Threat of National Heritage Areas And How to Stop Them: Part Two

Well, today you won’t find people participating in one of the grand historic traditions of the river – living on riverboats. There were once whole generations of river people living on such boats. Talk about American heritage – right out of Mark Twain!

But, back in the 1990s, those living on houseboats were moved off the river. Certain other boat traffic and river activities were also curtailed. It was all in the name of environmental protection, of course. In addition, the traditional flood plain designations were moved back to an extreme distance from the river, making it impossible for existing homes built inside the original flood plains to get flood insurance, thereby stopping any further building along the river. This was called land-use planning. Where was the preservation of the heritage of those homeowners whose families had lived along the river for generations? 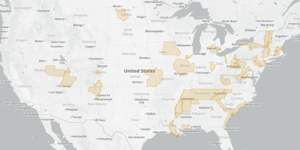 So, what are the Heritage Areas used to honor? Certainly not life on the river. They are essentially putting the Mississippi River in a museum.

In West Virginia we find the National Coal Heritage Area. Introduced in 1996 by former Congressman Rahall, it was sold as a way to honor the coal industry. Apparently, Rahall thought that since the miners had lost their jobs due to environmental regulations on the coal industry, perhaps, he could make up for it by throwing a few extra bucks their way by giving tours of their bankrupt area and closed mines.

I will make this challenge – just try to mine a single lump of coal inside the National Coal Heritage Area. Not on your life. Restricted. Taboo. In short, they put West Virginia coal in a museum.

Written into each and every Heritage Area bill is this line: “Nothing in this subtitle…abridges the right of any property owner… including the right to refrain from participating in any plan, project, program, or activity conducted within the National Heritage Area. . .” In other words, say proponents, homeowners are assured that they actually have the right to opt out of the Heritage Area – so there is absolutely no threat to your property rights. Wow!

That language is nothing but a flimflam to keep you calm and ease your concerns, because it is physically impossible to opt out of an official government boundary that has been created by federal legislation and federal funds. It is also impossible to simply declare that you are going to opt out of any of the land-use regulations, down-zoning, or other restrictions that result from the Heritage Area designation.

When I addressed an audience of 400 residents who live inside the proposed boundaries of the Caddo Lake NHA I asked for a show of hands from everyone who wanted to opt out of it. Every hand in the room went up. As the restrictions on property are steadily legislated into place due to the NHA, opting out is simply not an option.

As I and others worked to oppose National Heritage Areas, we asked proponents in Congress if they had commissioned property rights experts to look over the legislation to find any dangers.  We said, “Have you put these bills before experts, specifically public interest property rights attorneys?” The answer we received was “No, and we don’t plan to.”

The federal designation, made through congressional legislation, creating federal regulations and oversight by the National Park Service, require a form of contract between state and local governmental entities and the Secretary of the Interior. That contract is to manage the land-use of the region for preservation. That means federal control and zoning, either directly, under the terms of the “management pact”, or indirectly.

Such “indirect” control is the real danger. In spite of the specific language in the bill which states property rights will be protected, the true damage to homeowners may well come from the private non-governmental organizations (NGOs) and preservation agencies which receive public funds through the Park Service and then use those funds to promote their own private agendas.

The experience with many existing National Heritage Areas clearly shows such groups will convert this money into political activism to encourage local community and county governments to pass and enforce strict zoning laws, which enforce their own radical environmental agenda and have no real association to the stated goals of the NHA.

While the tactic makes it appear that home rule is fully in force, removing blame from the federal designation, the impact is fully the fault of the NHA designation. The result means private property owner’s rights are diminished and much of the local land-use and development is brought to a standstill.

Property that is locked away for preservation is no longer productive and stops providing the community with tax dollars. Some roads most assuredly will be closed “to protect the integrity of the historic area”. That means land is locked away from private development, diminishing growth for the community, even if that land has nothing to do with historic preservation. It also means hunting and recreational use of the land may well be curtailed.

Eventually, such restrictions will take away the community’s economic base. Communities with sagging economies become run-down and uninviting. Preservation zoning and lack of jobs force ordinary people to move away. Experience has shown tourism rarely materializes as promised. And it’s never enough to save an area economically.

These are the reasons why the specific language in the Heritage Area legislation designed to protect private property rights is basically meaningless to the actual outcome. While the land may not be specifically locked away in the name of the federal designation, its very existence creates the pressure on local government to act. The result is the same.

The fact is the National Heritage Area designations are completely unnecessary. Most of the true historic sites, like presidential birthplaces and battle fields, are already well preserved and under the control of the National Park Service.

In short, the greatest threat from the Heritage Area is that it creates a pipeline of federal money – and consequently political power – for these national organizations to promote their specific agendas over your community and its development. In addition, there is virtually no accountability for tax-exempt NGOs on how they actually spend the Federal Park Service funding. Their books are closed. No FOIA. No open meetings. No public hearings. No elections. How does that honor American heritage?