Many Voters Suspect Democrats Of Using IEDs As Their ‘October Surprise’

The Democratic Party and their foot soldiers in the news media are openly — many say unfairly — blaming President Donald Trump and conservatives for the multiple improvised explosive devices (IEDs) sent to well-know left-wing Democrats such as multi-billionaire businessman and far-left activist George Soros, Bill and Hillary Clinton, Barack Obama, Eric Holder and others. But there are those who suspect the bombs are the work of far-left Democrats or members of their supporting mobs.

Although no one has taken responsibility for the IEDs, the politicized leftist news people are pointing their collective fingers at the White House and the Republicans or at the “deplorables.”

“These people in the news business have already made up their minds to help Democrats with a possible ‘October Surprise’ only days before the mid-term elections And while the FBI and the Bureau of Alcohol, Tobacco, Firearms and Explosives (ATF) are on the case, my faith in those two agencies has decreased,” said former New York police detective Benny Cardona, who spent 10-years assigned to the Arson & Explosion Squad.

“I’m very skeptical of the IEDs — pipe bombs — sent since not one of the nine confirmed IEDs succeeded in detonating. A bomber who knows what he or she is doing would have had at least one device explode. But that’s not what happened,” said Det. Cardona.

Within the conservative news and commentary media, including prominent Republicans  talk radio superstar Rush Limbaugh and frequent Fox News guest Candace Owens, there is suspicion that Democratic Party operatives were behind the IEDs that were sent by mail to Democratic Party and Deep State members.

Rush Limbaugh suggested on-the-air that the acts were committed to fuel support for Democrats two weeks before the midterm elections.  “It’s happening in October,” Limbaugh noted.. “There’s a reason for this.”

He added that attempted violent attacks are out of character for conservatives.   “Republicans just don’t do this kind of thing,” he said. 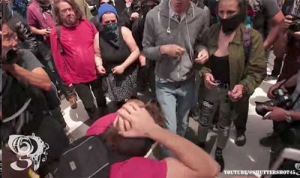 Antifa claims to be an anti-fascist movement and claims to be fighting against fascism, but their actions prove the opposite. Interestingly enough, the “Antifa” movement began in a few European countries in the 1920’s and expanded outward to other countries eventually reaching America. The modern-day Antifa movement is funded by the elites like George Soros, the Clintons and Barack Hussein Obama.

The new Antifa has proven by its members’ own actions who the real fascists are, and all they need to do is look in the mirror. Antifa considers themselves to be rebelling against the establishment, whilst upholding all of its ultra-politically correct views.

As hypocritical as Antifa is, the organization is proving to be quite a big problem in our country. They are progressively becoming more dangerous and bolder as each day passes. The mainstream media portrays Antifa in a positive light claiming they are champions of justice, but just look at any raw footage of their “protests” and you will realize their actions resemble riots much more than an actual protest.

Recently, Antifa has begun to arm themselves and call for open rebellion against the United States Government, and more specifically, against President Trump and his supporters. Antifa tries to paint themselves as champions of minorities but only if those minorities agree with them.

An armed Antifa group is launching a new cell in Philadelphia, with support from the “alt-left” news media.

The group continues to offer their members and ‘contractors’ (hired and paid protesters) access to anti-police workshops called “Our Enemies in Blue.” The group draws inspiration from convicted murderers and calls for violence against the police, theft of goods, and armed insurrection. 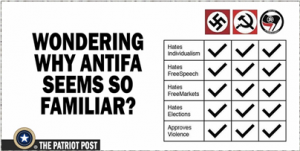 The struggle in the US seems like an unrelenting weight being pushed down on revolutionary forces, but that same force has been bearing down on criminalized communities for decades with no reprieve. Mosques are being ruthlessly bombed, state agencies and vigilante groups are deporting Latino people with relentless vigor, LGBTQ people are being battered, and the destruction of black life continues unabated as millions languish in the plantations of the modern day slave system.

Immersed in these struggles, against the state and its white supremacist militias, we are developing the capacity to liberate ourselves and others. We fight side by side with those facing state and reactionary violence and with each person we free from captivity the stronger we grow. As demonstrated by our resistance in Charlottesville, we will not cede one inch of ground to racists. As each new collective forms, we begin to create new political realities and continue the march together against white supremacy and for a dignified world.

We continue in the legacy of Philadelphia’s rich revolutionary tradition, demonstrated by Mumia Abu Jamal, Russell Maroon Shoatz, and the MOVE organization.

We are now establishing a revolutionary political movement that can confront the challenges ahead of us, and together with Philadelphia based comrades, we are taking one step closer.

Law enforcement officials and bomb technicians have been critical of the news coverage of the ‘serial bomber’ who targeted top Democratic Party or Deep State leaders such as the Clintons, Barack Obama, Eric Holder, CNN, radical multi-billionaire George Soros and others.

Several experts in terrorism and explosive devices believe that using the term “terrorists” to describe the alleged bomber(s) is something that doesn’t help to explain the criminal use of bombs by obviously politically-motivated criminals.

One expert, former bomb technician Det. Lukas Grenier, said, “It’s almost comical that you practically have to beg the Democrats and the news media to get them to label a criminal act by a radical Muslim as an act of terrorism, but if it’s even remotely connected to President Trump it’s one of the first terms they use in the hope it hurts the Republicans.”

Most of the police veterans and active officers said they preferred to use terms such as sabotage and saboteur to describe a criminal act perpetrated by a non-combatant or bonafide member of a terrorist group. They also gave Conservative Base the benefits of their careers in stopping bombs from becoming crime scenes filled with death and destruction.

The idea of radical leaders using sabotage to achieve their objectives isn’t new. Leon Trotsky supported the use of sabotage and terrorism to advance so-called social justice. Decades before an ice-axe found its way into his skull, Trotsky argued in Dictatorship vs. Democracy that Communists who reject “terrorism in principle” weren’t bona fide Communists.

Sabotage, like any other weapon, offers its user an amplification and extension of his own strength, both to harm others and defend himself. Sabotage has the additional appeal of destroying much evidence of itself, and is usually hard to prove.