Marxist Colin Kaepernick Leads The NFL Into The Gutter

As a former NFL player, I am one American who will have nothing to do with any NFL Team that cannot find the corporate courage to stand for the millions of courageous past great Americans whose sacrifice gave meaning to our flag and national anthem and to the millions upon millions who still dream to come to its free shores. —Burgess Owens

Burgess Owens was one of the speakers at the 46th Phyllis Schlafly Eagle Forum council meeting in St. Louis, MO.  He is an amazing man, a beautiful Christian and a fine speaker.  His above quote is absolutely how so many of us in America, the greatest country on earth, feel about these ungrateful NFL players.

Colin Kaepernick’s biological mother is white, as were his adopted parents.  His biological mother disagrees with his protest.  His white adopted upper middleclass parents say they stand with him.  Kaepernick couldn’t get more over-the-top in dissing the country that has made him a wealthy and privileged man.  On Independence Day he traveled to Ghana which he claims is his ancestral home.

American soldiers have fought and shed their blood on battlefields for this spoiled American millionaire brat to spew his invective against our country because his leftist Islamist beliefs claim our law enforcement personnel are brutalizing black Americans.  Racial inequality is what Kaepernick and his adopted parents are claiming.

Sorry, but I just don’t buy this drivel.  Every opportunity is given to black Americans through affirmative action and more.  Police are being blamed for protecting themselves from thugs, and everyone knows it, but the black community is using this as a reason to be destructive. 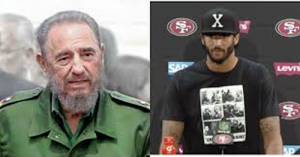 San Francisco 49ers quarterback Colin Kaepernick, who last made headlines by refusing to stand during the playing of the national anthem before an NFL football game, continued to act as a lightning rod for controversy by appearing at an August 2016 press conference wearing a T-shirt emblazoned with photographs of ’60s Nation of Islam leader and black power advocate Malcolm X and Communist Cuban dictator Fidel Castro.

A slogan on the shirt read, “Like Minds Think Alike.”

The shirt depicted scenes from a 1960 meeting between Castro and Malcolm X. Kaepernick wore it to a news conference after the 49ers’ third preseason game, which was when his refusal to stand during the national anthem became a major national story.

A Miami Herald reporter from a family of Cuban exiles got into a heated argument with Kaepernick over the picture of Castro on his shirt.  The quarterback kept emphasizing the fact that Malcolm X was also on it, saying the slain civil rights activist’s willingness to meet Castro proved he was “open-minded” about aspects of the world.  The reporter again asked him about Castro, and Kaepernick said, I’m not talking about Castro and his oppression.  I’m talking about Malcolm X.

The reporter accused Kaepernick of changing the conversation because Castro was too uncomfortable to talk about, especially when he remains largely reviled by Miami’s sizeable Cuban immigrants.  So, what does Kaepernick do?  He praises the social initiatives of Castro claiming Cuba has the highest literacy rate because they spend more on education!

I guess this millionaire football player hasn’t a clue of how much America spends on education and obviously the propaganda and brainwashing of our government schools worked well on Kaepernick.  Neither does Kaepernick have a clue of what Castro and Malcolm X stood for. 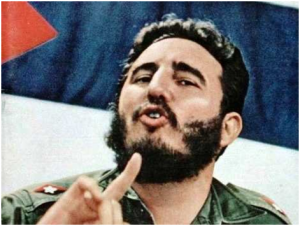 Kaepernick praised Castro’s social initiatives!  Obviously, he hasn’t a clue of what the people went through once they helped overthrow the Batista regime and installed the lying Communist as their dictator.

Castro failed to hold the free elections he had promised the Cuban people. He put to death hundreds of his former political enemies in hasty trials intended more as propaganda than as judicial proceedings. Then he proceeded to fill Cuba’s jails once more with political critics, including many of Castro’s former comrades, anti-communist labor leaders, and other veteran opponents of the Batista regime. The press was placed under strict censorship. Foreign-owned property was expropriated arbitrarily without fair compensation, and in many cases without any compensation at all. Only the communists emerged unscathed from Castro’s repressive and vindictive actions. 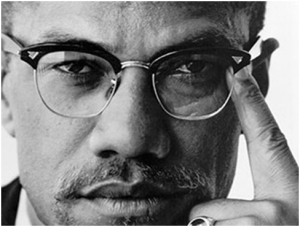 Malcolm was a converted Muslim and he spent time in prison for drug dealing, gambling and prostitution rackets.  He spent much of his time in seedy nightclubs. At age 19, he was arrested for the first time for allegedly stealing and pawning his half-sister’s fur coat. A second arrest followed for allegedly mugging an acquaintance at gunpoint, and a third arrest came after he burglarized a series of Boston-area homes. Sentenced to state prison in 1946, his cellblock mates called him “satan” for his habit of pacing around and muttering curses at God and the Bible.

Following the example of his siblings, Malcolm joined the Nation of Islam and struck up a correspondence with its leader, Elijah Muhammad. Like Marcus Garvey and his Back to Africa movement, the Nation of Islam preached black self-reliance and empowerment. It also taught that whites were a race of “blue-eyed devils” created millenniums ago by an evil scientist.  Malcolm spent a decade as head of the Harlem mosque, in addition to launching a Nation of Islam newspaper, giving speeches at dozens of universities around the country, participating in debates with mainstream civil-rights leaders and occasionally meeting with foreign heads of state.

Malcolm X eventually broke with Muhammad’s Nation of Islam.  He also originally disagreed with integration, but later changed his mind on that as well.  He moved farther to the left, and he mentored and guided Louis X (later known as Louis Farrakhan), who eventually became the leader of the Nation of Islam.

Malcolm X advocated for equality as he saw it.  If it could be obtained through peaceful means then so be it.  If not…then he advocated by any means including violence.  One of Malcolm’s more famous speeches from 1964 is called The Ballot or the Bullet.  And yes, toward the end of his life Malcolm moved towards black nationalism and socialism.

The Truth of These NFL Protests

An attorney called into the Rush Limbaugh program and what he said was absolutely spot on:

I hear the so-called smart people all over the news media, our politicians are talking about that these players somehow have a right to protest. If they want to take a knee, that’s their right, their freedom of speech right.

They couldn’t be more wrong. This is Constitution 101 class stuff. The First Amendment does not apply to these players. There must be state action for the First Amendment to apply. And the NFL is not the state. They have an absolute right to fire those players because of their speech. There’s no right for them, they do not have a right to protest whatsoever.

He is spot on, we do not have a right when employed to make political statements.  We are hired to follow the direction of our employer.  And the NFL does not allow these political demonstrations.  All of these football players who take a knee should be immediately fired.

Here’s what it says:

The National Anthem must be played prior to every NFL game, and all players must be on the sideline for the National Anthem.  During the National Anthem, players on the field and bench area should stand at attention, face the flag, hold helmets in their left hand, and refrain from talking.  The home team should ensure that the American flag is in good condition…it should be pointed out to players and coaches that we continue to be judged by the public in this area of respect for the flag and our country.  Failure to be on the field by the start of the National Anthem may result in discipline, such as fines, suspensions, and/or the forfeiture of draft choices for violations of the above, including first offenses.

Now the media is claiming that President Trump’s criticism of these spoiled fools disrespecting America is sparking even more protests.  Well, tell you what, I rarely watch football, but I will never watch the NFL again in my life.  Buh bye!

When President Trump criticized the NFL last weekend for permitting some players to protest during the National Anthem, the President called that conduct disrespectful and called on NFL owners and leaders to stop it.

Commissioner Roger Goodell responded by attacking the President. Goodell called the President’s criticism divisive and then he arrogantly claimed the President’s words suggest what he called an “unfortunate lack of respect for the NFL, our great game and all of our players.”

Excuse me Goodell, but the divisive ones are your players, and you are going to lose more than money.  Football used to be an escape, but you’ve allowed it to be another pile of leftist B.S. by uneducated and wealthy spoiled brats.

Our President said to fire these fools, and that’s what the American people are saying as well.  And tell you what, it’s why we love him, because our President echoes what we are saying and thinking! 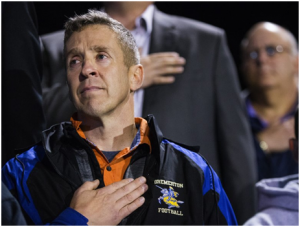 Bremerton High School football coach Joe Kennedy lost his job after he refused to stop praying on the field after games. The 9th Circuit Court of Appeals has refused to reinstate Kennedy.  In two opinions totaling 62 pages, the appeals judges said Kennedy could not prove he was exercising his First Amendment rights as a private citizen when he insisted, against orders by the Bremerton School District, on taking a knee at the 50-yard line after football games and praying.  Link

So, a small prayer after a game gets this coach fired, but these egocentric NFL punks can offend countless Americans with impunity. 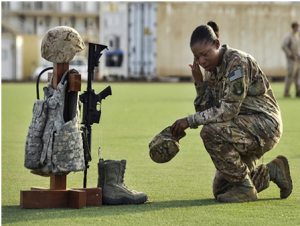 They take a knee in honoring their fellow soldiers and friends.

They take a knee in prayer, weeping for their brothers, sons, and daughters.

On their knees, they come together to honor the heroes who led them.

And they bow a knee to pay final respects to the ones they lost. 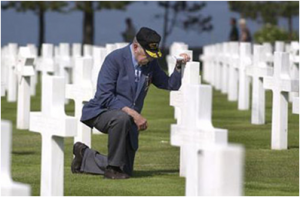 America has granted more freedom and liberty to all her people than any other nation.  This NFL action by these millionaire sports figures is disgraceful and disrespectful to America’s citizenry and especially to her veterans.

Our beautiful National Anthem says it all.

Then conquer we must, when our cause it is just,
And this be our motto: ‘In God is our trust.’
And the star-spangled banner in triumph shall wave
O’er the land of the free and the home of the brave!

Our flag does not fly because the wind moves it.  It flies with the last breath of each soldier who died protecting it.

And this is why we stand with our hands over our hearts.

P.S. There are many causes that need funding, and one of them is NewsWithViews.  Please help us keep this website alive and well and coming into your mailbox every morning.  Monthly donations really do help us keep freedom and liberty alive.  Please send your donations here.