Note: As you can see, in the past this revised story has been run in several publications including NewsWithViews.com in 2012 and 2014 and to this day little has been done regarding the source of the fuel for these increasing forest and wildfires. Currently, as the forests and the communities around them continue to burn and take lives, you can thank the U.S. Forest Service (USFS) and radical environmentalists for their actions or in many cases their inactions.

During the early part of the 1980’s I was employed as a USFS employee in Ennis, Montana, my job was to write brochures related to the experiences we Americans can enjoy on our public lands. It was during this time I studied Pine Beetles and Dwarf Mistletoe, which at that time were just beginning to get established in many of our National Forests.

“Happy Camp, in northern California is where the Karuk Tribal Headquarters are located. In years past the actions of the Tribe along with environmentalist are responsible for the five local timber mills shutting down. Once that happened tree thinning of dead and dying trees halted in the area which allowed fuel loads to go unchecked.

Happy Camp is dominated by Forest Service land that encompasses 6,000 acres of private land and 600,000 acres of public land, once the environmentalists and Karuk Tribe had halted timber sales, many tribal members had to leave town to find jobs. Today, shamefully, Happy Camp has become famous for drugs.

U.S. Forest Service (USFS) employees throughout the west say an Environmental Impact Statement (EIS) or an Environmental Review (ER) can take from one (1) to ten (10) years to complete. Upon completion, there is an additional process for logging contracts or to thin trees on our National and State forest lands. Upon conclusion of that process, environmental groups file lawsuits to stop any logging while homes burn along with our forests and in some cases causing deaths.

The following two paragraphs and the pictures were taken from Evergreen Magazine in 2012. 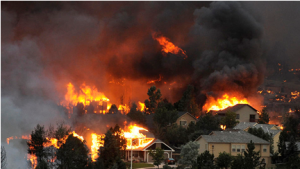 “What is happening in Colorado this summer is happening all over the 11 western states: Oregon, California, Arizona, Idaho, Wyoming, South Dakota, Montana, Washington and New Mexico. And it will continue to happen in progressively larger and more deadly scales until the federal government [that would be Congress] gets serious about doing the thinning and stand tending work necessary to reduce the risk of stand replacing wildfires in overstocked and dying federally-owned forests.

“The “hobby forestry” projects the Forest Service is currently conducting aren’t making a dent in the crisis we face. Large-scale, long-term projects that pay their own way [meaning no taxpayer subsidies] are the only solution. We have the science, manpower, technology and markets needed to do this 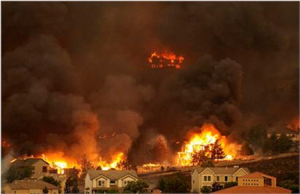 work safely and successfully in an environmentally sound way. And still Congress refuses to act. Meanwhile, depending on whose estimate you wish to accept, somewhere between 40 and 60 million acres of federal timberland in the west are ready to burn with the next lightning strike or abandoned campfire.”

By 2014, decades later with little being done about the parasites, they have left many of our National Forests overrun by Pine Beetles leaving millions of acres of dead and dying trees. With the millions of acres of dead trees dropping their nettles to the ground, the possibility of massive fires is astounding. As you travel the highway from Bozeman, Montana to the hereby town of Livingston, instead of flourishing green trees the mountains are covered in brown trees – dead from Pine Beetles. Sadly this is true in several other western states as well.

Using the Butte National forest as just one example, the Native Eco System Alliance and the Alliance For The Wild Rockies file lawsuits and in almost all cases they have been successful in halting timber sales. The Butte National Forest has 3.4 million acres of federal lands and as of 2014 1.3 million of those acres are either dead or dying. There were three logging sales pending in the Butte forest, they are the Fleece Sale, the East Deer Lodge Valley Sale and the Flint Foothill Sale and all were being protested and in the process of being halted because of the environmental groups legal maneuvers.

As environmentalists fight to stop logging in the forest, one has to wonder if they realize what dangers they are promoting to families, their homes and the forests.

Wildlife and ecosystems they rely on are destroyed. Streams become polluted and fish die and when the rains come massive mudslides are inevitable. In the past there have been some radical environmentalists from Eugene, Oregon that say it is better to burn the forests than to allow timber companies to log. One has to ask the question, is it better to destroy homes and our forests by using our tax dollars to further their radical agenda than to have healthy flourishing forests as a result of responsible forest management?

Throughout the west it is the same story, environmentalists creating havoc with American industry. In just one case, in December of 2009 logging activity was halted in the Six River National Forest after Karuk Tribal activists blockaded logging roads. The Karuk were working with three radical environmental groups, the Environmental Protection Information Center (EPIC), Klamath Forest Alliance, and Klamath Siskiyou Wildlands Center who stated in their jointly filed lawsuit that they were against that logging plan. These groups and the Tribe ultimately prevailed in that lawsuit.

Another example of thousands I can site is about one of the most despised persons in Northern California for over two decades is the radical environmentalist Felice Pace of the Klamath Forest Alliance. Pace has worked aggressively against not only the timber industry but also against farmers and ranchers by continually testifying to the North Coast Regional Water Quality Control Board that farmers and ranchers are ignorant of good agricultural practices. Additionally, Pace has worked with the Karuk’s efforts to stop all logging and hobby gold dredging on the Klamath River which is destroying local communities as a result of abolishing the tourist trade. While at the same time many of Pace’s associates have been involved in the growing of marijuana on America’s National Forests near Happy Camp.

To reiterate, it is time (2018/2019) to save our National Forests with the help of our elected officials. Using President Obama who’s staff controlled the USFS, California’s Governor, Jerry Brown and California’s Assemblyman Jim Nielsen as examples, so many of them apparently believe it is better to criticize each other, to lie, cheat and steal to further their own political agenda and financial gain instead of dealing with radical environmental groups that are damaging America’s resources and economy.

According to an alleged tweet on November 10, 2018 President Trump stated, “more than 4,000 are fighting the Camp and Woolsey Fires in California that have burned over 170,000 acres. Our hearts are with those fighting the fires, the 52,000 who have evacuated, and the families of the 11 who have died. The destruction is catastrophic. God Bless them all.”

Another alleged tweet by Trump on Saturday November 10, 2018 he blamed the wildfires on “gross mismanagement” of the state’s forests, and threatened to withdraw federal funding from California. “There is no reason for these massive, deadly and costly forest fires in California except that forest management is so poor.”

Now that President Trump is in office it is time for all Americans to stand firm and demand change within the USFS and do what is necessary to make that stand a reality and mandate to do what is necessary to prevent the destruction of our forests, the thousands of homes & structures and most of all the deaths of our most beloved citizens.

California Governor Jerry Brown went public with his version of the massive California wild fires. Brown seems to think the fires in California are a direct result of ‘Global Warming” without even mentioning the possibility of any other cause like poor forest management or the cause of massive fuel loads as a result of millions of dead and dying trees. Nor has he commented on the tremendous amounts of carbons flooding the atmosphere from these out of control forest and wildfires.

If all the concerned citizens of our country would all call their elected officials in the Senate and Congress and demand change we “might” see a difference if they are indeed concerned about our National Forests.