Millions of Americans cannot tell you who lived at Mount Vernon or who wrote the Declaration of Independence, let alone the Emancipation Proclamation. But they know that to be a Benedict Arnold is to be a traitor of the deepest dye, someone who coldly betrays not only a sacred cause, but every moral scruple along the way. Arthur Herman

“It’s like the Bush years never ended,” notes one National Security Council staffer who didn’t come in under McMaster. “I didn’t sign up for this s**t and the American people didn’t vote for it.” Link

The staffer also doubts that Democrats are to blame for withholding security clearances, especially for those with ties to General Michael Flynn. The Pentagon under Secretary Mattis has been working with Senator John McCain to deny security clearances over the fictitious Russia investigation.

And, an ex-FBI agent warns that McMaster is in the enemy camp.

Who Lobbied for LTG McMaster

Breitbart gave us the inside information from Jerusalem Post columnist, Caroline Glick.

Finally, there is the issue of how McMaster got there in the first place. Trump interviewed McMaster at Mara Lago for a half an hour. He was under terrible pressure after firing Flynn to find someone.

And who recommended McMaster? You won’t believe this.

Senator John McCain. That’s right. The NSA got his job on the basis of a recommendation from the man who just saved Obamacare.

Senator Tom Cotton also lobbied for McMaster having once served under him, and Defense Secretary Mattis did as well. [Link]

But the nationalists may have a competitive advantage: Trump, who already thinks McMaster is a “pain” who talks too much and has complained to aides that he wants Flynn back at the White House, is reportedly considering sending McMaster to replace Gen. John Nicholson as the top commander of American and NATO troops in Afghanistan. [Link] 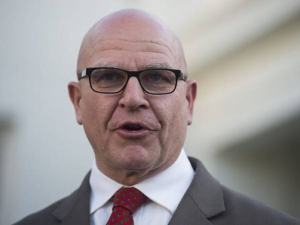 One would think that McMaster would shortly be out the door because he is not liked by Bannon or the President.  However, he allegedly has an ally in Chief of Staff John Kelly.

Kelly told McMaster that he wants him to remain, and actually authorized him to “make any staffing changes he wants.”  McMaster took that as a green light to oust top intelligence aide Ezra Cohen-Watnick, a Michael Flynn hire who has a warm relationship with Jared Kushner.

In the past, McMaster attempted to rid the council of Cohen-Watnick, but was overruled by President Trump, Steve Bannon, and Jared Kushner.  Now, after months of trying, he has succeeded.

McMaster’s abhorrence of Bannon is quite obvious, as those who he’s fired were close to Bannon.  And the fact that he hired CFR and Trilateralist, Dina Habib Powell, a close friend of Valerie Jarrett and Huma Abedin, as his Deputy NSA Advisor for Security is extremely troubling. 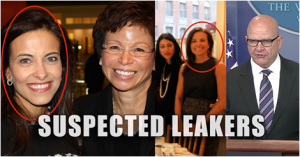 Two separate National Security Council sources have confirmed that McMaster and Deputy NSA Dina Powell have leaked classified information at an unprecedented rate to their allies in the anti-Trump media, leading Congress to issue a report warning about its ramifications.

As for Kelly, Rush Limbaugh stated that Kelly called former FBI Director Comey when he was fired to express his anger over how Trump handled it.  Kelly allegedly told Comey he was even considering resigning over how Trump treated the former FBI director. [Link]

And… Breitbart is reporting that McMaster is frequently volatile.

Former Obama advisor, Susan Rice wanted General Flynn out, and she apparently helped make it happen.  After McMaster was selected, she tweeted to him that she hoped he could choose his staff and get rid of the Strategic Initiatives Group.  The Strategic Initiatives Group is a layer of the White House National Security Council that’s led by Mr. Bannon.  McMaster has stated that he believes Rice did not do anything wrong amid accusations of “unmasking” the identities of Trump associates.

Why should Susan Rice still have a security clearance?  How is giving this known liar and power abuser access to secret data consistent with our national security?  Obviously, the NSA Director is serving an agenda that has no similarity to our President’s and is not based upon what is best for our nation.

The president was not aware of McMaster’s actions, according to two senior White House officials and an intelligence official, but obviously is by now.

Glick noted that “all of these people” whom McMaster has recently fired, Rich Higgins, Derek Harvey, and Ezra Cohen-Watnick “are pro-Israel and oppose the Iran nuclear deal, positions that Trump holds.”

The president was not informed of the move until after Higgins was fired, according to one source who is in regular contact with senior NSC figures.

Published reports described Higgins’ firing as a “lasting victory” for McMaster over longtime Trump officials who helped get the president into office.

Meanwhile, Glick noted, McMaster has replaced pro-Israel officials with anti-Israel, anti-Trump officials, and he allowed anti-Israel Obama holdovers to continue in their jobs:

McMaster fires all of Trump’s loyalists and replaces them with Trump’s opponents, like Kris Bauman, an Israel hater and Hamas supporter who McMaster hired to work on the Israel-Palestinian desk. He allows anti-Israel, pro-Muslim Brotherhood, pro-Iran Obama people like Robert Malley to walk around the NSC and tell people what to do and think. He has left Ben (reporters know nothing about foreign policy and I lied to sell them the Iran deal) Rhodes’ and Valerie Jarrett’s people in place.

Victoria Coates, a Flynn hire who served as a senior NSC member until recently, has been reassigned at her request to the administration’s Middle East peace team. The move is being viewed as a promotion and it is expected she will continue to play a role in the Iran portfolio, sources said.

Another wonderful member of the NSC, K.T. McFarland who was the Deputy NSA under General Flynn is now the Ambassador to Singapore. 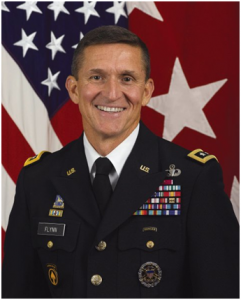 Glick expressed disbelief that Trump could fire former General Michael Flynn as NSA “essentially for nothing,” while allowing McMaster to attack Israel, and undermining the rest of the Trump administration’s foreign policy with impunity.

Caroline Glick said that Trump should not fear firing another advisor, and I agree with her.  McMaster’s agenda is totally different than the President’s.  He and his entire leftist staff need to hear the words, “You’re fired.”

Iran is the Catalyst

One of the central flashpoints in this internal battle has been Iran and the future of the nuclear accord, which Trump campaigned against.  The following info is from a report by the Free Beacon.

“McMaster basically has this list and over the next two weeks he’s going to phase out more senior officials loyal to Trump,” said one administration insider intimately familiar with the upheaval occurring at the White House National Security Council (NSC). “They’re taking out people who were chosen to best implement the president’s policy that he articulated during the campaign.”

All these moves have instilled fury both inside and outside of the administration and it’s obvious our President is being pushed in a direction which is antithetical to the campaign promises that brought him into office.

Many of these fired NSC officials had been making the case that Trump should scrap the Obama administration’s 2015 nuclear deal over increasingly aggressive Iranian ballistic missile activity and mounting evidence Tehran is breaching the accord. McMaster, as well as Secretary of State Rex Tillerson and top Obama-era State Department officials who worked on the deal, have aggressively urged maintaining it.

The reason Derek Harvey is out is because he had constructed a comprehensive plan on how to scrap the nuclear deal. 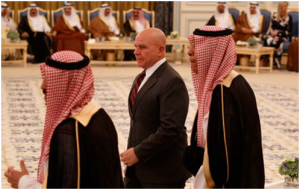 In the past, McMaster has refused to fire the Obama holdovers. Now-fired Middle East NSC director Derek Harvey compiled a list of Obama holdovers and took that list directly to the president, who requested that McMaster follow through with Harvey’s recommendations. McMaster outright refused.

A source described the Trump administration’s Iran policy as “completely gutted” in the aftermath of these firings.

“These were people who fought for Trump’s election since he was nominated,” said one of the multiple sources in close contact with the NSC. “Many of these people were in Trump Tower during the period between the election and inauguration. These are people who gave up everything to support him against Hillary, and these are the people being purged by McMaster.”

McMaster told the National Security Council staff that the label “radical Islamic terrorism” was not helpful because terrorists are “un-Islamic.” Link That has been his position for years. McMaster even sent memos throughout the government complaining of Trump’s usage of these words in the joint session of Congress speech.  That was Obama’s stance, but President Trump has used those very words many times.

In a story by the Atlantic‘s Rosie Gray which detailed the firing of Higgins, it is clear where McMaster stands on the dangers of Islamic Radical Terrorists.

The story described a memo written by Higgins outlining how the Trump administration should wrest control of policy-making from career staffers hostile to Trump. McMaster is said to have gone on the “warpath” over the disclosure of that memo.

Rich Higgins, a former Pentagon official who served in the NSC’s strategic-planning office as a director for strategic planning, was let go on July 21. Higgins’s memo describes supposed domestic and international threats to Trump’s presidency, including globalists, bankers, the “deep state,” and Islamists. The memo characterizes the Russia story as a plot to sabotage Trump’s nationalist agenda. It asserts that globalists and Islamists are seeking to destroy America. The memo also includes a set of recommendations, arguing that the problem constitutes a national-security priority.

“Globalists and Islamists recognize that for their visions to succeed, America, both as an ideal and as a national and political identity, must be destroyed,” the memo warns. It argues that this has led “Islamists to ally with cultural Marxists,” but that in the long run, “Islamists will co-opt the movement in its entirety.”

Higgins wrote the memo in late May, and at some time afterwards it began circulating among people outside the White House associated with the Trump campaign to whom Higgins had given it.

Higgins’s past writings focus on similar themes. “National Security officials are prohibited from developing a factual understanding of Islamic threat doctrines, preferring instead to depend upon 5th column Muslim Brotherhood cultural advisors,” he wrote in September. Higgins gave an interview to the Daily Caller News Foundation last year that outlines many of the same ideas laid out in the memo.

Higgins, according to another source with direct knowledge of the incident, was called into the White House Counsel’s office and asked about the memo. On July 21, the Friday of that week, he was informed by McMaster’s deputy Ricky Waddell that he was losing his job.

Another source said McMaster looked for evidence in the NSC’s email system to determine the name of the memo’s author “and then fired him.” [Link] 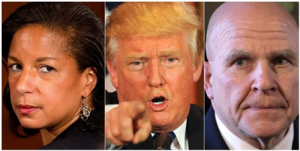 McMaster is following Susan Rice’s orders and eliminating all the people who came up with Trump and are genuinely loyal to him.

The security council continues to be overwhelmingly staffed with Obama holdovers (almost all of whom have retained their positions.)

So why then, is our President defending McMaster when conservatives are seeking his dismissal? [Link]