Men Without Chests Threaten Our Culture And Civilization

“We make men without chests and expect of them virtue and enterprise. We laugh at honour and are shocked to find traitors in our midst. We castrate and bid the geldings be fruitful.” – C. S. Lewis

The Abolition of Man by C.S. Lewis was first copyrighted in 1944, which makes this short booklet all the more astonishing.  The insight Lewis had in those years of the pervasive philosophy that was intermingling within the educational systems is just as relevant for today, and now it is right in our faces. We can see vividly the corruption of morals and basic decency that is leading us more and more toward a Godless society.  C.S. Lewis looked logically at what happens when faith and tradition are removed from a society.  And we just watched what Lewis was describing in Judge Kavanaugh’s hearings, including the protests by Soros paid anarchists.

“Men Without Chests” is the curious title of the first chapter of C.S. Lewis’ Abolition of Man.  Lewis explains that the “The Chest” is one of the “indispensable liaison officers between cerebral man and visceral man. It may even be said that it is by this middle element that man is man: for by his intellect he is mere spirit and by his appetite mere animal.” Without “Chests” we are unable to have confidence that we can grasp objective reality and objective truth.

The result of such chest-less education, as Lewis warns, is a dystopian and totalitarian future.

As our society disintegrates into what C.S. Lewis described in his short booklet, we are seeing more and more men without chests.  Those men are allowing the destruction of our society by anarchists who literally hate America and her culture and want it destroyed. 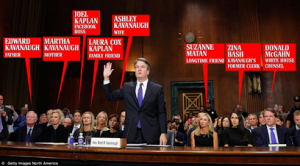 Recently, hundreds of Facebook employees voiced outraged at senior executive Joel Kaplan, head of global policy for Facebook, for attending Judge Brett Kavanaugh’s congressional hearing in an apparent show of support for the Supreme Court nominee.  Kaplan is a longtime friend of Judge Kavanaugh.  Many employees felt that Kaplan’s presence at the hearing signaled that Facebook as a company had endorsed Judge Kavanaugh. They expressed their discontent in internal company message boards as well as directly to CEO Mark Zuckerberg.

CEO Sheryl Sandberg wrote in an internal message to employees that she thought “it was a mistake for him to attend given his role in the company.” A meeting has been scheduled to further discuss employees’ concerns. Zuckerberg, Sandberg and Kaplan are expected to attend and answer questions.

Kaplan apologized in a note to staff, but also added later, “I believe in standing by your friends, especially when times are tough for them.”

When did having friends and loyalties outside of your employer’s ideals become verboten?  Why apologize?  For what?  Only men with no chests do that.

The dean of Journalism and Mass Communication at the University of Georgia recently issued an apology to those he had “offended” with a tweet congratulating a childhood friend on becoming the state’s Republican candidate for governor.

Charles Davis then faced an intense backlash from liberals, who accused Davis of being a “racist” blind to his own “privilege” for daring to suggest that Brian Kemp is “a nice guy.”

Davis tweeted to his friend, “I went to high school with GOP guv candidate @BrianKempGA.  We played YMCA ball from childhood.  Politics be damned.  He is a nice guy, always was Kind to a fault.  He’s a friend, always has been, and will be when we’re old(er) and grey(er).  That’s how all this should work people.”

He then apologized and tweeted, “I’d like to apologize to anyone offended by my tweet shout out to Brian kemp.  It was ill-timed and poorly written.  I’ve read and learned so much from you all and will endeavor to be more thoughtful.”

No, it wasn’t ill-timed, and neither was it poorly written, get a chest!

In other words, Charles Davis has been warned that speaking or caring about Republican friends is verboten.  Men without chests! 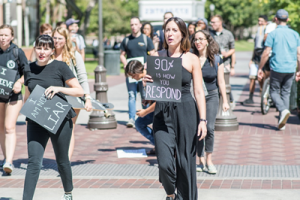 In this MeToo era of believing every charge leveled by a woman against a man, the University of Southern California students want Professor James Moore fired for stating the law…innocent until proven guilty.  This is a part of the U.S. Constitution that ensures justice for those accused of a crime.  Not so for these university students however.

Moore got himself in hot water when he noticed an email that was sent out to all staff and students at the university last Thursday. The email, which instructed students to “Believe Survivors” of sexual assault, inspired Moore to give those students a lesson in the criminal justice system.  “Accusers sometimes lie,” he pointed out in a reply-all email of his own. “If the day comes you are accused of some crime or tort of which you are not guilty, and you find your peers automatically believing your accuser, I expect you find yourself a stronger proponent of due process than you are now.”

Instead of the university supporting the truth Professor Moore was trying to teach his students, Dean Jack Knott placated them with comfort and assured them that they were right and Professor Moore was wrong!  “What he sent was extremely inappropriate, hurtful, insensitive,” he said. “We are going to try to do everything we can to try to create a better school, to educate the faculty. This is going to be a multi-pronged effort. We are going to have a faculty meeting later this week around implicit bias, sensitivity towards survivors.”

Obviously, it’s extremely inappropriate to point out that the accused in this country deserve due process.

Dean Jack Knott believes the truth of the U.S. Constitution is verboten.  Another man without a chest.

While our secular society still maintains that honor, ethics, and integrity matter, it has purposely attacked, silenced, or destroyed those institutions and organizations that used to teach moral principles and universal Godly truths that instilled honor and character into men’s hearts and souls.

Today’s educational establishments have embraced moral relativism. Other political and cultural institutions have done the same, including our so-called progressive churches where most pulpits spew watered down pablum.

Interesting that in the cases of Tawana Brawley, the Duke lacrosse players, and the Rolling Stone defamation article, investigations of the alleged victims proved the innocence of the accused.  Over 219 celebrities, politicians, CEOs, and others have been accused of sexual misconduct since April 2017.  One wonders how many of these accusations were valid.  And our Senate Judiciary Committee is not seeking an investigation of Christine Blasey Ford.  We are just to accept that despite a total lack of proof or corroboration, she is telling the truth.

Now a retired University of Southern Maine professor has offered students a course credit to harass Sen. Susan Collins on Kavanaugh because Senator Collins understood the fallacious attacks on this brilliant Judge and the importance of nominating this man to the supreme court. This professor has done this without the consent of the committee of faculty or university deans…and this is the seditious rot inside the brains of those teaching our young people.

Real women want strong masculine men with chests.  They want decent, honorable, reliable men who have not been feminized by society and do not cower to the pressures of today’s tyrannical and anarchist society.  And men have two choices: to find female strength captivatingly attractive, or to be insecure and intimidated. Real men love strong women, because God’s glory is beautiful, and “woman is the glory of man.” Link

C.S. Lewis saw the early stages of the moral collapse, societal chaos, and cultural decay we’re all now experiencing full force.  Inevitable destruction awaits all societies that reject universal moral principles, deny the existence of objective reality, and silence and punish those who teach and speak the truth.  Men must return to God, follow His moral principles, seek the truth, and lead virtuous lives.

In his September 19, 1796 Farewell Address to the nation, George Washington stated: “Of all the dispositions and habits which lead to political prosperity, Religion and Morality are indispensable supports. In vain would that man claim the tribute of Patriotism, who should labor to subvert these great Pillars.”

William McGuffey, author of the McGuffey’s Readers, which were the mainstay of America’s government public school system from 1836 till the 1920’s, wrote: “Erase all thought and fear of God from a community, and selfishness and sensuality would absorb the whole man.” Where do you think the world is heading today?