Home/May 2017, Opinions/Message To President Trump, Time To Pull The Plug On The Swamp

Message To President Trump, Time To Pull The Plug On The Swamp

We have never had total war against a President like we’re seeing with Donald Trump. All elements of national media are uniting to stop him.  —Ann Coulter

It’s nearly incontrovertible that a slow-motion coup d’état is being attempted. Since November 9, 2016, forces within the U.S. government, media, and partisan opposition have aligned to overthrow the Electoral College winner, Donald J. Trump.  From the day of his electoral victory over Hillary Clinton, the Fake News Media (FNM) has waged flat-out relentless war upon him.

Our President is in a nest of vipers, a swamp with treacherous and traitorous snakes intent on destroying his Presidency.  It’s time to take off the gloves and drain the swamp.

It’s War Against the Deep State

Communist Vladimir Lenin stated, “We can and must write in a language which sows among the masses hate, revulsion, and scorn toward those who disagree with us.”  Our globalist establishment socialist media and politicos are following Lenin’s words to a “T.”

It is why President Trump must pull the plug on the swamp.

Everything our President has wanted to do has been sabotaged by previous administration appointees with too much authority, and their underlings have followed suit.  Every single person in any appointed position, not appointed by President Trump, needs to be told, “Thank you for your service, but as of 5 p.m. today you are no longer needed.”  Start with the holdovers in the Justice Department.

Mr. President, you’re not going to lose by telling them goodbye, and you need to put your own people in charge.  We’ve seen you hire successful businessmen, and that’s wonderful, but you cannot choose from inside the beltway with establishment globalists and win.

On Monday (5/15), the Washington Post ran this front page headline:  Trump revealed highly classified information to Russian foreign minister and ambassador.  And how did the WaPo know this?  Because anonymous “current and former U.S. officials” who were not there told them.  It is obvious where this bilge originated.

These establishment insiders are passing false information to the democrats and media, and once these insiders are gone, you will have cut the head off the snake.  Their underlings will be afraid they’re next, and your loyal appointees can finally take their places.

Bring in your initial supporters, there are many fine people in America who supported you and went to extreme lengths for 18 months to help you get elected.  We want you to succeed, far more than any of the beltway insiders!  There are so many of us!  The former sheriff right here in Knoxville, TN, who ran the President’s East Tennessee campaign for a full 18 months, has anti-terrorism training received in Israel that few in the DHS have had.  He should be in your Department of Homeland Security, and he’s a helicopter pilot as well!  Another strong supporter who I would love to see in your administration, and who could help you in so many ways, is Rudy Giuliani!

The left is never going to stop because they cannot believe you won the election, but expelling them from your administration will be a powerful blow to their bloodlust derangement.  It’s time to go on the offensive with a sledgehammer of criminal prosecution by the Justice Department.

At the end of the third presidential debate in October of 2016, Chris Wallace asked Donald Trump if he would accept the results of the election.  Of course, Hillary said she would because she believed she had it all locked up.  However, Mr. Trump said, “I will tell you at the time.” Hillary Clinton responded to Trump’s rigged elections claims by calling his remark, “horrifying.”  She said, “That is not the way our democracy works. We’ve been around for 240 years. We’ve had free and fair elections. We’ve accepted the outcomes when we may not have liked them, and that is what must be expected of anyone standing on a debate stage during a general election.”

Well Hillary, you and the rest of the establishment globalists in our government as well as the media, have made it clear that they don’t accept the people’s choice of Donald J. Trump.  This is why a stake must be driven through the heart of their socialist dogma.

Protestors have shouted, “Not my President.” Leftists literally took to the streets to shout and cry and burn flags because their preferred candidate lost.  The college snowflakes have proven even more embarrassing. The front page of the Harvard Crimson is full of articles about the “anxiety,” “disbelief” or “shock” being felt by students and faculty over Trump’s win. Cornell students hosted a “cry-in” that allowed students to “console” each other.

Protests erupted at many other schools, including Columbia, where these snowflakes were “weeping in the streets” and “running, screaming and crying.” The University of Michigan-Flint provided students “safe spaces” and “counseling” to help them deal with the results of the election.

Good Lord, these puppies and kitties couldn’t have lived through WWII, much less the depressions of 1929 and 1931.  They haven’t a clue of what hardscrabble Americans lived through in those days, and how they struggled and survived and won.

There is NO Russian Collusion

Everyone knows it, including some of the Democratic leftists.  Even Alan Dershowitz has openly stated there is no evidence of any Trump/Russia collusion.

You know where there was collusion? How about Debbie Wasserman-Schultz throwing Bernie Sanders under the bus. She and the DNC promoted Hillary Clinton, and the leaked emails showed how the Democrats screwed over Bernie Sanders.

How about the collusion between CNN and the Hillary Clinton campaign to the extent of giving her debate questions in advance? And that would be Donna Brazile, who worked at CNN. There’s some collusion for you, and that’s meddling in an election to boot. There’s no evidence the Russians did anything of the sort, and yet what are they investigating?

Patriotic Americans came out in droves to vote for Donald J. Trump.  He promised to build a border wall and stop illegal immigration, and the number of illegals crossing our border is already down 70%.  That wall will be built, and there is money for the wall.

Our President promised to reverse Obama’s unconstitutional executive orders.  Trump has turned back a good number of them, and there’s many more to come.  Link

Withholding federal funding from sanctuary cities where illegal immigrants and lawbreakers are harbored will happen in time, and the Justice Department may end up doing it.

Donald J. Trump wants to re-equip and rebuild our military, reduce federal regulations and cut corporate taxes to get the economy growing, encourage domestic exploration and production of domestic energy source, renegotiate or eliminate trade deals, and the big one, tax reform to simplify the income tax system, and shrink the size of federal bureaucracy.

Key Positions Need to Be Filled

It is unbelievable how many key positions the Senate has failed to confirm.  Of 557 key positions requiring Senate confirmation … 455 still have no nominee, and perhaps some of them won’t, 24 are still awaiting nomination, 49 are formally nominated, and only 29 are confirmed.  What is the holdup on the other 20?

These positions include Cabinet secretaries, deputy and assistant secretaries, chief financial officers, general counsel, heads of agencies, ambassadors and other critical leadership positions. These are a portion of the roughly 1,200 positions that require Senate confirmation.

So yes, President Trump, it definitely is time to drain the swamp and do as Jack Welch suggests. 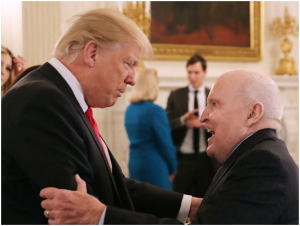 Jack Welch, the former chief executive of General Electric, advised the president to get more aggressive with the Deep State government bureaucrats whose leaks have triggered much of the chaos now engulfing the White House. “You’ve got to nail them and get them the hell out of there,” Welch said.

Waging war against the Fake News Media is even more urgently necessary.  That’s because the FNM is the Deep State’s mouthpiece to the world.  Shutting down the mouthpiece by slitting its jugular means cleaning house.

Email: – https://www.whitehouse.gov/contact/  (thanks to Richard for this)

P.S. Time is a commodity none of us can regain once it’s gone, but if you’re spending time doing something the Lord has led you to do, it never seems a waste.  The journalists at NewsWithViews spend hours in research and writing, and our editor spends even more time putting it all together in a format that comes into your home daily.  I know that late every evening, he is up working to keep Americans informed with the truth, and that is why I so often ask for a few dollars in donations.  We donate our time and talent, and Paul Walter donates his hard-earned money and time, all to save our country.  Please, please help if you can, and send your donations here.