When taking the stage at the recent Tony Awards, actor Robert De Niro could not curb his enthusiasm for President Donald J. Trump. The first things out of his mouth, even before he greeted the crowd with a salutation or said anything else, were, “I’m gonna say one thing: F**k Trump.” Those two words were met with a standing ovation of elated applause by the clapping seals of Hollywood elitists. “It’s no longer down with Trump, it’s f**k Trump.”

One has to wonder what enrages the extreme liberal mind so much, that in spite of all of Trump’s 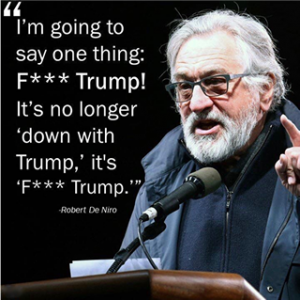 successful accomplishments in his short time in office, they hate him as much as they do.

Here is a rundown of President Trump’s accomplishments since taking office:

Many conservatives have stated that Donald Trump is the best president that we have had since Ronald Reagan, and I would agree. I’d even go one step further and say that, as far as measurably being a doer and getting things done, he has thus far been a better president than Ronald Reagan. I thank Trump for being the hope and change America needed.

Why do the liberals hate Trump, in light of his accomplishments? They do not care about America or 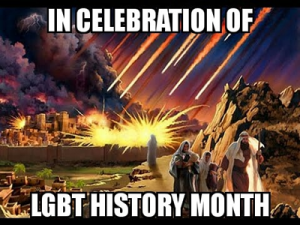 his accomplishments. Liberals hate the middle class and Hollywood demonstrates this best, as they prefer the worship of peasants rather than a prosperous America. They can no longer fearmonger about his policies or articulate a rationale for despising him. They are reduced to two words: F**k Trump. There are two sacrosanct core planks that liberals care about more than life itself: abortion and breakdown of the traditional family through feminism, sexual immorality, and homosexuality. President Trump has refused to acknowledge June as LGBT history month and has banned transgenders from joining the military.

If the illegitimate president Barack Obama, aka Barry Soetoro had accomplished anything during his eight years in office that wasn’t counterproductive or destructive to the well-being of the United States of America, conservatives and republicans would gladly have acknowledged his accomplishment. About the only thing he may have done right was to green light the taking out of Osama bin Laden when informed by our troops that we knew of his location.

This writer is not so naïve as to not question even that decision. What other decision was Obama going to make at that point? Stand down, do not engage bin Laden? I believe if it was politically feasible he would have ordered just that. I think this because our country was lucky to escape from the clutches of a Muslim Manchurian president whose every actions were to bring down the nation he commanded as president. In his final days in office, Obama shipped pallets of $150 billion to one of America’s and Israel’s greatest adversaries, Iran.

Obama’s legacy is doubling the federal deficit, burdening Americans with healthcare plans that they could not afford and that were unsustainable, weakening the military and the economy, dividing this nation over race, and a privileged mentality class warfare. Obama’s legacy is one big headache which is being erased by an even bigger aspirin, President Donald J. Trump.

As the Washington D.C. swamp is being continually exposed, and Americans are becoming accustomed to new levels of traitorous behaviors that remain unprosecuted, the Hollywood swamp is following suit and behaving in new levels of vulgarity and depravity this country has never before witnessed.

We can often tell the character of a person by the company he keeps, and Robert De Niro is no 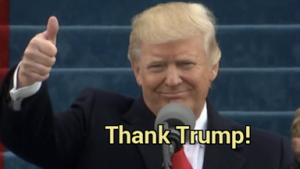 exception to this rule. One of his best pals is none other than Hollywood producer and pervert Harvey Weinstein, the man involved in pay for play sex scandals and schemes involving child prostitution rings at home and abroad. De Niro has recently starred in at least ten of Weinstein’s movies and De Niro and Weinstein have frequently wined and dined together.

De Niro himself, who has called Donald Trump a “creep” and a “low life” was allegedly caught using the services of an international prostitution ring that hired underage children and specialized in providing prostitutes to wealthy, high-profile clients, according to various news reports.