Home/December 2017, Opinions/Mothers: For The Love Of Your Child STOP Doing This

Mothers: For The Love Of Your Child STOP Doing This

I had intended to make this week’s column on another issue, but once again, yet another innocent little angel has been murdered.

Three year old Mariah Wood’s body was found this past Saturday in a ‘creek’ deep enough divers were used in the search. That beautiful toddler went missing a week ago today in Jacksonville, North Carolina. Guess who was the last to see her?

Yep. The boyfriend, Earl Kimrey, who claimed he checked on Mariah at 1:00 am and told her to go back to sleep. What? Isn’t a child already asleep at one in the morning? Sure, babies and toddlers wake up during the night, but according to reports the mother had already checked on the child at midnight. No explanation was given as to why Kimrey allegedly needed to check again an hour later. 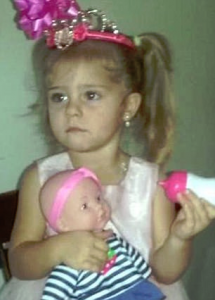 The biological father, Alex Woods, who has been involved in a custody issue with the mother said:  “Someone just walked right up in there, grabbed the 3-year-old out of the bed and she didn’t cry, she didn’t scream? ‘Nobody heard anything? Four people in the house, two adults and two kids, someone just comes up and snatches the baby and walks out?'”

The police and FBI weren’t buying it, either. They believed the child was dead within a short period of time. Kimrey was arrested in the early hours Saturday morning and charged with hiding a body, obstruction of justice, second-degree burglary, felony larceny and possession of stolen property.

Police believe little Mariah’s body was moved to the creek so she didn’t accidently drown in the middle of the night. The arrest warrant said Kimrey obstructed justice by “removing Mariah Woods’ body from the scene of her death, and did conceal (the) death and body, knowing that (she) died from unnatural causes.”

While positive identification was not confirmed, the police believe (they know) the body is Mariah. I saw the initial headline last week and while I prayed for the best outcome, reading the details about the boyfriend I knew they were likely looking for a dead child.

During the past week the mother, Kristy Woods, who also has two minor sons, was naturally beyond distraught. Her little angel gone from their trailer in the middle of the night. I am truly so, so very sorry for Kristy and her family. Little Mariah, I have no doubt has been welcomed into the arms of our Heavenly Father.

How the hell did this guy continue to get probation?

Kimrey is given the presumption of innocence. If he doesn’t cop a plea he will go to trial. There will be no Merry Christmas for the mother, her little boys, the whole family shattered.

If you think this is a rare incident, think again. If you read my Killing Fields series you know women across this country bring men into their home/apt who rape and or kill the girlfriend’s child and the mother. So many are pregnant.

The majority of the killers have rap sheets for drugs, domestic violence, you name it and yet, these mothers bring these men into their homes and we see tragedy over and over and over.

Whether it’s because the man is a pedophile, drugs or just plain evil, these men should NEVER be brought into a home with children.

Each time one of those columns was posted my email box was flooded from Americans shocked at what is going on in this country. I’m not but it still hurts each time I see another Mariah story.

One simply must ask the most difficult questions. Did Mariah’s mother know her boyfriend had a long rap sheet? How could she not? If you date someone and then ask the guy to move into your home with your three minor children one would think the mother would know all about the boyfriend’s past. This guy had three convictions on his record. Things like that follow you around. Employment, applying for credit, probation officers and so forth. Kimrey was apparently employed by an HVAC company. Did they know his criminal history?

In 2010, a 10-year old, Hailey Dunn, went missing in Colorado City, TX, about 30 miles east of my town.  A massive manhunt with the Texas Rangers leading the investigation. That’s all that was talked about around here for months. Everyone praying little Hailey would be found alive.

Sadly, her remains were found in April 2013.  Guess who was the last to see Hailey alive? You got it. The boyfriend, Shawn Adkins. He was and still is the only person of interest but never arrested and remarked to more than one person that killing someone would be just like killing a deer.

Both the mother and boyfriend failed polygraph tests.  Police had been to the home for a domestic violence situation where Adkins finally admitted to threatening the mother and daughter. What would most mother’s do at that point? You kick the SOB’s backside right out the door. Didn’t happen, but what did happen during a search of the home makes me puke:

“The seized items included a memory stick and CD-R found in the bedroom of Hailey’s mom, Billie Dunn, and suspect Shawn Adkins.  Those were seized during a consensual search of their home, where Hailey was last seen on Dec. 27. Dunn denied the images belonging to her or Shawn Adkins, saying she has no idea where they would have come from.  Adkins told Tatro he was unable to comment about the development at the request of his attorney.”

Domestic violence is NEVER okay. Yes, I’ve read and watched enough about domestic violence to have a good understanding of how difficult it is for the majority of women out there to get out. How after the boyfriend (or girlfriend as in the case of Jodi Arias who butchered her ex-boyfriend, a sweet, kind man, Travis Alexander) kills a loved one, someone invariably says, “I didn’t want to interfere”. Really? Should that become the new most popular inscription on a headstone?

If you know someone, help them. Talk to them. Get help in helping that single woman or mother trapped. Domestic Abuse Hotline. 1-800-799-7233, 24/7. Their counselors are well trained to help both the victim (and, yes, men are also victims of domestic violence) or a friend or family member who suspects or knows what’s going on.

Even though I’m up there in years, I’m not dead and do know what it was like dating but I NEVER brought a strange guy into my home after my divorce when my daughter was only a year old. No way. Not with my precious daughter in my home. No introductions for a long time if the dating even lasted. Sometimes dating is just that. Of course, things have changed so much over the decades but evil never takes a holiday.

I know, it seems so, well, uncomfortable snooping into a new boyfriend’s background, but for YOUR safety and if you’re a mother, DO IT. If you’re a friend or family member of a teen or woman dating a guy that seems ‘off’, gives evasive answers in response to perfectly innocent questions, like where they went to school, what they do for a living and things like that, talk to your friend or family member. Tell them you’re doing it because you love them and don’t want to see them become another statistic.

Start by going to the Internet: Ways to Check If Your Boyfriend Is a Criminal

Yes, it does take time to do research and sometimes a small fee to search records but isn’t your life worth it? Isn’t the life of your precious child/children worth doing what has to be done in this day and age?