Do all children have some inherent right to live in America if they have done nothing wrong? If not, then why should the children of illegal immigrants have such a right? —Thomas Sowell

Fifty-seven percent of all households that are led by an immigrant (legal or illegal) are enrolled in at least one welfare program.  —Michael Snyder

Trump’s tweets about DACA have his supporters reeling.  American taxpayers have paid billions and billions supporting law breaking illegal aliens, and we’re sick and tired of it.  We voted for Trump because of his stance on illegals and our sieve southern border being closed.  Here’s what he tweeted:

They have been in our country for many years through no fault of their own – brought in by parents at young age. Plus, BIG border security.

Does anybody really want to throw out good, educated and accomplished young people who have jobs, some serving in the military? Really!

The answer to his question seems pretty clear: The people who want to throw out those described are the tens of millions of Americans who voted for the guy who said he would do just that, that’s you Mr. President!

Our President says, “We’re not looking at amnesty, we’re not looking at citizenship, we’re allowing people to stay here.  We’re working with everyone, with Republicans, with Democrats.  We’re not talking about amnesty, we’re talking about taking care of people, people who have done a good job and were not brought here by their own volition, but very importantly, we have to have a wall.” 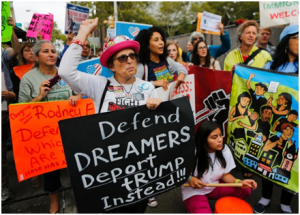 Sorry Mr. President, but if you think you aren’t giving them amnesty and citizenship and the right to vote, Congress or your successor will.  Just take a look at what Reagan’s amnesty cost us.  And what about taking care of the American citizens whose tax dollars funded these law breakers!  Your number one allegiance belongs to us, the American citizenry, not DACAs.

Meeting with the Enemy

After Schumer and Pelosi had dinner with the President, they came out and lied to the media. There is no deal with the President on DACA and the elimination of the border wall. Toss that!  It’s garbage from the lying leftists.

However, on the heels of the evening meeting with these two socialist-loving Democratic leaders, the President’s tweets are our clearest public indication yet that he is eager to sign a law that will protect those 800,000 or so immigrants from deportation in exchange for border security measures of some kind.

Sorry Mr. President, but on this one we’re not with you no matter what you think you’ll get in return for the amnesty of these illegals, and that’s what it is whether you 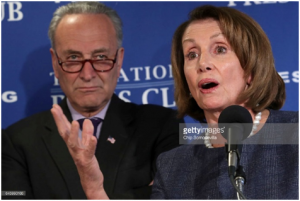 call it that or not.  You will get nothing from the likes of socialists Schumer and Pelosi.  They will stab you in the back because they hate you, even more than the establishment globalists in the Republican party.  They want DACA and then amnesty for all the illegals who have broken the law and entered our country illegally and cost the American working citizens billions in tax dollars. Do Not Trust Them Ever!  They will burn you every time, and the illegals vote for Democrats.

You tweet us, “Does anybody really want to throw out good, educated and accomplished young people who have jobs, some serving in the military? Really!” 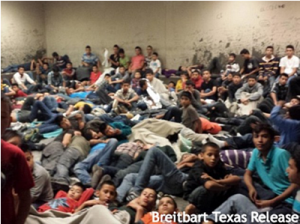 sent across the border when Obama said, “Everyone come!”  Link  Just who the hell do you think paid for the cost of resettling these children in America?  The American taxpayer!

When are you going to care about us, the American citizen taxpayer???

Do You Remember What Obama Did?

President Obama’s de facto open border policy welcomed everyone, from unaccompanied minors to cartel members to Islamic terrorists, into our country.  Whether it’s called “refugee resettlement” or “amnesty,” the program clearly was intended to keep these underage illegals in the U.S.  The open border provided an entry way for more terrifying possibilities of who was entering our country.

It really doesn’t make much sense now, does it?!  Our homeless go without eating and our elderly go without needed medications.  Our mentally ill go without treatment because Reagan turned them loose from mental healthcare facilities.  Our troops go without proper equipment and our dear veterans do without promised benefits and proper medical care. And what do the sewer rats in our Congress do?  They unconstitutionally donate billions of taxpayer dollars to other countries as well as to illegal aliens who have entered our country illegally.

I know Mr. President that you are a decent and caring man, so I ask you Mr. Trump, “Where the hell is your concern for the American citizen who has sacrificed so much and who has watched our debt rise exponentially to where every citizen in America has that rotten debt albatross around their necks?

Time to stop it, and that means deportations, and it means giving jobs back to Americans. It means caring about America’s citizens before you care about these illegal aliens who have family in foreign countries they could go back to.  Make them come in like our ancestors did through Ellis Island.  Freedom is not free, we paid big time for it, and they have not.  They cheated, and stole into this country illegally, they broke the law and then used the welfare programs of this country with no respect for her citizens.

According to Rush Limbaugh, there is no other country in the world who takes in foreign children and gives them aid and comfort.  Send these children back to their parents and families in their countries of origin.

Who is doing the research on DACA for the feds?  I have to wonder, because just a quick scan of websites tells anyone that DACA is ripe with fraud.  As many as half of the approximately 800,000 people who now have work permits under DACA may have lied on their applications to get approved, said Matt O’Brien, an attorney and until last year a manager in the investigative unit of the U.S. Citizenship and Immigration Service (USCIS).

“Based on what I had seen and what I discussed with my colleagues, the fraud rate is 40 to 50 percent. It’s possible that it was higher,” he told LifeZette this week.  The kind of fraud that was often flagged, he noted, involved lying about age.  Link 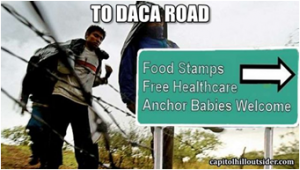 There you have it, and we’re to allow these people to stay in our country?

What about American families who have lost loved ones because Dreamers murdered them?  Is there no sense of protection for American citizens?  Apparently not, because illegals, and I include Islamic refugees, continue to rape, murder, and destroy citizens of this country.

A man charged with multiple murders was erroneously shielded from deportation under DACA, despite gang ties.  And, sympathetic media has scrambled to trot out shiny Dreamers, but forgets all the nightmares, and the nightmare list is very long.  Link

The reality is that DACA is still growing, they’re not sending their best and brightest (never have), it will cost Americans and our government a huge amount of money, it encourages more illegal immigration, it imports crime, it helps democrats, and it is fundamentally illegitimate. Link

Representative Steve King says Trump must reverse his amnesty course to what he promised in the campaign or the GOP will be finished in 2018 and 2020.

Excuse me Rep. King, you are right, but the GOP who has the majority in both houses of Congress is doing absolutely nothing to help Americans or this President.  They have a perfect opportunity to rectify every filthy thing the Democrats have instituted over the last few decades.  Instead they are working against the President’s policies (the wall, tax reform, Obamacare repeal, infrastructure, veteran care, etc.). They are slow walking everything that should have been passed the first three months Trump was in office.  Democrats would be verboten for decades if Republicans would pass Trump’s legislation, but they are so in bed with the filthy commie left’s agenda that they will destroy any chance of our President succeeding.

Sean Hannity is a long-time supporter of our President, but he made it clear on his September 14th program that Trump must keep his campaign promises on amnesty or his support is over.  Link

Steve Bannon, who following his White House exit returned as the head of Breitbart News, told CBS’ “60 Minutes” last week he didn’t agree with Trump’s decision to give Congress a window to save DACA legislatively, and that “the guys in the far-right” and “on the conservative side” were “not happy” with it either.

No Amnesty is a Good Amnesty by Ann Coulter spells out the truth of why, like Reagan’s amnesty in 1986, it ends up being far more illegals allowed into our country. Of the 888,637 fraudulent DACA applications, guess how many our government approved. Answer: More than 800,000. I suggest you read this important article.

Laura Ingraham tweeted, “When does the American working class, without any real wage increase in 15 years, who send their kids to overcrowded public schools, get amnesty?”

In another tweet to her 1.71 million followers, Laura called a pledge for more border security “meaningless.”  She’s angry and so are we.  A promise is a promise President Trump, and there is no way in hell that we believe Rush Limbaugh’s statement that 67% of Trump supporters don’t care about DACA.

Just read the negative comments on articles President Trump, if your Chief of Staff Kelly will allow you to see them.

Both the left and right have pummeled our President with spewing fake news, resisting his policies, obstructing, and lying about him at every turn.  They want him to fail along with his policies and promises.

The President needs to stick to his agenda, reform the tax code, repeal Obamacare, repatriate corporate profits, cut government regulations, scrap trade deals like NAFTA, rebuild the military, build our border wall, give education fully back to the states and dump the NEA along with Betsy DeVos, fix the infrastructure, and above all, defeat Islamism and ISIS, and rid our nation of barbaric savages who wish to destroy our culture and overtake our nation.

People who don’t keep their promises can’t be trusted.  Remember what happened to George H.W. Bush who promised no new taxes. He gave us Bill Clinton.

It’s time to let your voice be heard!  No amnesty for DACA.

P.S. Please help us keep NewsWithViews alive and well by supporting our efforts.  The many authors who show up in your email every day are not paid.  They do what they do for love of country.  Paul Walter, the publisher and CEO of NWVs, escaped from communist Slovenia.  His love of this nation is why he started this great website.  Please help keep it alive, monthly donations truly help us survive.   Donate here.