For thousands of years, Arabs lived in authoritarian paternalistic culture. There was always a headman, a chief, a dictator, or a know-it-all who had the answers or resources that had to be followed and obeyed. This “follower mentality” had a great heuristic value. It freed the masses from the often-arduous task of thinking for themselves, taking responsibility, and tackling problems. It was always easier to let someone else do all those chores and simply follow his directives. This type of mentality was ideal for Muslim who did not want to think for themselves.

Authoritarian paternalistic culture ruled the Arabs for as far back as historical records show.  Arabs were always headed by an autocrat man. At times, there were councils, all male and usually advisory in function with no or little executive power. The headman embodied in himself all authority: the legislative, the judiciary, and the executive.

The system was a top-down hierarchical, where all directives and decisions were dictated from the top and all people were to serve the top and at the good-pleasure of the top. 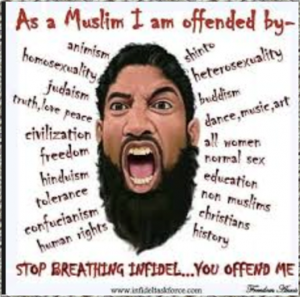 A father in the family and a father figure of some kind in the larger group always ruled. The man on top, a father or a father figure, was adhered to as the authority, followed, and obeyed.

Islam is custom-made and perfectly-suited for people who are accustomed to being treated like children. Being a Muslim is a bargain of sort. The believer continues to remains a child mentally while aging. His part of the bargain is the total surrender to Islam. In return, Islam promises to supply him surefire answers as well as perfect roadmap for this life and a guaranteed bliss in the afterlife.

In other words, the Muslim’s mind is imprinted with authoritarianism which starts with the supreme authority, Allah, through his one and only prophet, Muhammad, his Caliphs or Imams, and the high-ranking religious divines all the way down to the village clergy. This authoritarian mentality encompasses all aspects of life for the Muslim. The king and his dominion as the viceroy of God, the Emir and his despotic ways, the Khan and his unchallenged rule over the tribe, the village headsman and his extensive power, and finally the father and his iron grip at home over the women and children. All these authority figures are male.

The authoritarian type poses numerous problems and presents many ramifications—ramifications much too important and complex to be comprehensively treated here. For now, it is important to understand that a person with the authoritarian personality is an extremist. He can be docility itself under certain circumstances and a maniacal murdering brute under others. He is the type who would just as happily kill or die, when he is directed to do so. He would, for instance, gladly strap on an explosive vest, in obedience to a superior’s order, and detonate it in a crowd of innocent civilians without the slightest hesitation.

From birth onward, a Muslim’s brain is packed with the notion that everything in life is predicated on the will of Allah. Allah is in charge of all things and at all times. Allah is very much of a hands-on God. He does the thinking, he does the ordaining, and he decides the outcome for everything large and small. And since Allah is the all-knowing as well as the all-everything, the duty of the faithful is unquestioned obedience in all matters, irrespective of any and all contradictory evidence.

machinations of the accursed Satan. Hence, it is the sacred duty of the believer to put his Islamic blinders on and submit wholeheartedly and unhesitatingly to what is preached to him. It is within this deeply engrained mindset of the Muslim that he or she rarely says anything or commits to anything without the preamble of enshallah—if it is the will of Allah. In a way, this is a great out for the Muslim. If he wants to do it and does it, Allah willed it. If he doesn’t want to do it and doesn’t do it, Allah didn’t see it fit.

It is this type of mentality that is, in large, part responsible for Muslim’s fatalistic pathological system—The Islamic powers that be want to protect their valued stranglehold on the masses by keeping them in the darkness of ignorance and preventing them from being exposed to the light of truth.

Question: Why is it that the Muslims are so hellbent on passing laws and resolutions of the sort they are pushing?

Answer: Because Islam is loaded with faulty and bizarre beliefs as well as many primitive, discriminatory and shameful practices. So, they need to build a steel fence around their corral of absurdity to protect it from crumbling under the assaults of truth. They have much to hide and fear exposure the most.

Question: Why is it that these followers of Allah don’t mention any other religion besides Islam for the privilege they are seeking?

Answer: Because to Muslims, Islam is the super-religion and final religion of Allah. Judaism and Christianity are the only other two religions that are granted a grudging minimal recognition by Islam. All other religions and those without religion are blasphemy and blasphemous.

In short: No belief system or set of ideas, be they religious, scientific, philosophical, political or otherwise, should be protected from open honest criticism. It is up to the individual consumer to decide for himself, to the best of his ability and the compelling nature of the information, the value and veracity of any offering in a marketplace of free ideas.