Mystery Babylon Has Begun To Burn

A major fire erupted at the Notre Dame Cathedral in Paris, France, severely burning and damaging the historic Catholic landmark. French investigators have ruled out arson, but doubts linger as some Muslims were working on restorations of the structure and the fire occurred during the Christian holy week of Easter. Furthermore, beheaded statues of the Apostles were removed from the cathedral before the fire occurred, a telltale sign of Islamic terrorism.

In recent years, the Catholic Church, the always-changing, ever-evolving church, has sensed the rising tide of Islam, and true to the meaning of “Catholic,” the Universal Church has begun to adopt Islam in with its pagan-rooted religion.

THE ENEMY OF MY ENEMY IS MY FRIEND – Ancient Proverb 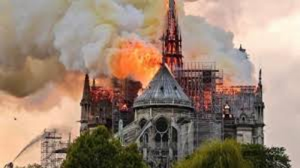 The secular agnostic-atheist and Muslim peoples of the world have united against the culture and faith within the Western Christian nations. The Western governments, often run by secular or Christian-in-name-only politicians, have welcomed in Muslim immigrants, flooding and overwhelming America, Europe, and other westernized Christian nations, knowing full well that Muslim immigrants will never assimilate to the culture or religion of their new immigrated to nation. The Western secular politicians, wanting to fully implement a New World Order, with a central world government, view Judeo-Christian values as a major impediment slowing them down from attaining their globalist government vision. Thus, the secular politicians, who have nothing in common with Muslims, have embraced them, as they know that Islamists will be an enemy of their enemy: Christians.

The Catholic Church, from its very foundation, was a usurper church, attempting to steal the glory that was due Yeshua (Jesus) and bestow it upon itself and Mary.

Catholics pray to, praise, worship, and build cathedrals and statues to Mary. By doing so, they break the first and second commandments of God simultaneously.

The Catholic Church, a usurper church, has even declared salvation through itself.

*Yeshua (Jesus) is of the Jews and His law (Torah) was given to the Jews.

MATTHEW 16:16-18 (NKJV) [WITH INTERPRETATION]:
Simon Peter answered and said, “You are the Messiah (Christ), the Son of the living God.” Yeshua (Jesus) answered and said to him, “Blessed are you, Simon Bar-Jonah, for flesh and blood has not revealed this to you, but My Father who
is in heaven. And I also say to you that you are Peter, and on this rock [YOUR STATEMENT OF FAITH THAT MY FATHER HAS REVEALED TO YOU] I will build
My church [ASSEMBLY], and the gates of Hades shall not prevail against it.”

The Apostle Peter was never the first pope of Rome, as Peter was the Apostle to the Jews (Galatians 2:7-8), and of all his travels recorded in the Scriptures, Peter never set foot in Rome. Yeshua (Jesus) built His assembly upon Himself, based on the statement of Peter that He was the Son of the living God. Yeshua (Jesus) did not build His church (assembly) upon the supposed rock of Peter.

THE ROMAN CATHOLIC CHURCH IS MYSTERY BABYLON (THE SECRETIVE, FALSE RELIGION CLOAKED AND PRESENTED AS THE TRUE FAITH) – REVELATION 17

REVELATION 17:4-6,16-18 (NKJV) [WITH INTERPRETATION]:
The woman [CATHOLIC CHURCH] was arrayed in purple and scarlet, and
adorned with gold and precious stones and pearls, having in her hand a golden
cup full of abominations and the filthiness of her [SPIRITUAL] fornication. And on her forehead a name was written:

MYSTERY BABYLON, THE GREAT, THE MOTHER [CHURCH] OF HARLOTS
[DAUGHTER PROTESTANT CHURCHES] AND OF THE ABOMINATIONS [FALSE
DOCTRINES] OF THE EARTH. I saw the woman, drunk with the blood of the
saints and with the blood of the martyrs of Yeshua (Jesus) [MILLIONS OF
MARTYRED SAINTS KILLED BY THE CATHOLIC CHURCH THROUGH CATHOLIC INQUISITIONS AND PERSECUTIONS DURING THE MIDDLE AGES].

These [THE SECULAR AND MUSLIM PEOPLE OF EUROPE] will hate the harlot [CATHOLIC CHURCH], make her desolate and naked, eat her flesh and burn her [HEADQUARTERS, THE VATICAN – ST. PETER’S BASILICA] with fire. For God has put it into their hearts [THE SECULAR AND MUSLIM PEOPLE OF EUROPE] to fulfill His purpose [TO JUDGE MYSTERY BABYLON, THE CATHOLIC CHURCH], to be of one mind [UNITED AGAINST CATHOLIC AND PROTESTANT CHRISTIANITY], and to give their kingdom [THEIR CHURCHES] to the beast [ANTIMESSIAH (ANTICHRIST)], until the words of God [END TIMES PROPHECIES] are fulfilled. And the woman [CATHOLIC CHURCH] whom you saw is that great city [VATICAN CITY] which reigns over the kings of the earth.”

“I will build My church [ASSEMBLY], and the gates of Hades shall not prevail
against it.” – Matthew 16:18 (NKJV) [WITH INTERPRETATION].

The Catholic Churches are the gates of hell. Catholic theologians and teachers are the gatekeepers of a false religious system, Mystery Babylon, which has blinded the masses with idolatry and lying wonders and keeps them from learning the true ways of the Messiah, Yeshua (Jesus).

One cannot worship God through the teachings of the Catholic Church and through the Holy Scriptures. The Catholic Church’s teachings are incompatible with the Scriptures, which they claim to represent. The Catholic Church mixes God’s festivals (Leviticus 23) with pagan holidays committing spiritual fornication (Revelation 17:4) with other gods (Ishtar: Easter; Nimrod: Christmas; Mary the queen of heaven – Jeremiah 7:18), and has intended to change God’s times and laws (Daniel 7:25). The Catholic Church may have intended to change God’s appointed feast times and laws, but CANNOT change them because they are eternal (Malachi 3:6; Hebrews 13:8). Catholics, Protestants, and many mainstream Christians are not obeying God’s eternal commandments, having replaced them with commandments of men, and are not worshiping God in spirit and truth. 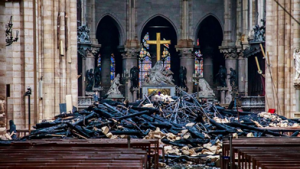 Many people of the world may sincerely grieve the loss of the Notre Dame Cathedral in Paris, but such mourning is in vain. God’s judgment is coming upon the Roman Catholic Church and all of its cathedrals for all its iniquity.

Islam will not dominate the world, except perhaps for a brief time with the Antimessiah (Antichrist) during the great tribulation.

The cross still stands amongst the burned rubble of the Notre Dame Cathedral, and the cross will always stand.