Our schools today are not places of higher learning but government re-education camps of propaganda to further the One World Order agenda where the world would live under the orders of one dictator.  Never has this columnist seen such malfeasance as that being practiced in today’s schools, used to brainwash students and to control the very thoughts of them. Leftist thoughts that is.

In our public schools today, there are mandatory LGBTQ classes to indoctrinate minds that gay is OK and perversion is strength. No student is allowed to opt-out of these sick classes. This is shocking, destructive and downright nasty. No one could even think of such things happening in our schools back in the days when Communism and homosexuality were hidden and virtue expected.

As usual, California is the leader of dingbat rulings that then spread throughout the nation like a fast moving plague. What happens in California unfortunately does not stay in California.

The public schools, totally run by Communist Democrats, use valuable class time where classic education has been obliterated and replaced with indoctrination of left wing politics. Graduating students come out knowing absolutely nothing but pushing back on all things decent and joining protest marches.

The latest school ‘history’ books in California describe our legally voted-in president, Donald Trump as a “racist’ and ‘mentally ill.’ Over 68 million people voted Trump into office. This is who the majority of voters wanted in The Oval Office. But the leftist immediately began trying to “impeach” our duly elected President so that one of them could take over. Trying to impeach a just elected president is ridiculous. Especially since he immediately began to accomplish everything he promised.

The earlier  schools taught manners, discipline, respect, Love of God and patriotism.  But that all ended in the 60’s when we allowed atheist Madalyn Murray O’Hair to complain, take to court and persuade that court-The Supreme Court- to abolish prayer in schools because she simply did not believe in God. So others should not believe in Him either. Kicking God out of our schools was not the most brilliant decision. This turned Satan loose to rampage and begin his unending evil which is now seen every day.

Todd Starnes was the first to publish this latest outrage that Advancement Placement students, beginning in California, are going to be taught that President Trump is mentally insane and his supporters, all of whom are mostly older, often rural or suburban, are also overwhelmingly white. That did it by golly.

In other words, Advanced Placement students are going to be taught that President Trump is mentally insane and his supporters are a bunch of irredeemable deplorables. Such descriptions would be laughable, but this garbage is being shoved into the minds of impressionable American teenagers.

Then there came SNOPES, the organization to correct phony news, so they say. That organization is owned partly by George Soros, who controls all the media and has Snopes to debunk any stories that he disagrees with. Snopes attacked this columnist who had learned that shortly after 9-11, Islam was being taught in the public schools, and wrote a world wide feature on it, after getting copies of the lesson plans and handouts. The media came down on me, and The Pittsburgh Gazette, had a Muslim writer tear me apart, calling me a liar and by name in the headline of their story.

Snopes said that the story was a hoax, that the entire story of Islam being taught in the public schools was a lie, in order to kill the story and keep it from the public.  Interesting, Soros controls the news media and the organization that tears apart legitimate stories to keep the public in the dark.

This latest attack on public school books slamming President Trump serves two purposes by the Soros Snopes: (1) It takes a major story, makes the story its own by slamming it, which brings Snopes more click bait with all public attention on their version of a major event, and (2) It serves to discredit anyone they want to bring down.

When pinned down, SNOPES stated that it was a lie that Pearson Textbooks teach that President Trump is a mental case. No, by golly, they say that ‘during polls taken during the pre-election, some persons said that Donald Trump was mentally insane and racist.’ Well that’s a big difference doncha know. Someone else saying this to someone else is not textbook publishers stating this, but random people.  Notice how Soros managed to get that idea out.

The Muslim indoctrination courses forced upon seventh grade public school students that this columnist attempted to stop, has expanded. Islamic and Muslim ideology has multiplied to the extent that we now have 50 Muslims in national political offices. Muslims now speak in public schools and in front of community organizations. And the public have been so blinded that they allow this.

Meanwhile despicable crimes are being committed by Muslims throughout the United States. I think of the three Muslim kids who raped a 3 year old and then urinated on her. This took place in an Idaho Falls  apartment building they had been placed in by doo-gooders who want to prove they love everybody. Residue of a bull! Forget these fantasies and deal with life itself honestly.

Americans have seemingly taken leave of their senses by voting Muslims into U.S. political offices. This is more than dumb. It is downright stupidity since it results in national suicide. Look at France and Germany. 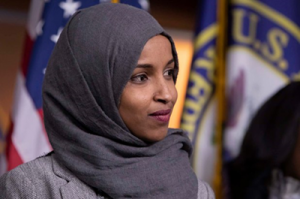 One of those Muslims ‘voted’ into public office, Representative Ilhan Omar (D-MN) returned to her home district in Minnesota last week to visit some area schools.  She spoke at Saint Anthony Middle School in Minneapolis and it was reported that parents and press were NOT ALLOWED to attend. Activist Mommy,  Elizabeth Johnston, an excellent website, made this known. The school stuck to their guns and shuttered doors to parents and the press.

What does Omar have to hide? What does the school? What gives them a right to host such a highly controversial speaker without allowing for press and parental oversight? This is highly disturbing. And just plain nuts!  As a public servant, anytime she is speaking to the public she should be on the public record.

Public schools are becoming nothing more than indoctrination factories for children. If you hope your child will be able to think freely for themselves one day and use facts to guide them (versus feelings), now might be the time to consider alternatives to public school!

We want ladies and gentlemen to graduate from our schools, not sexual deviants, anti-Americans, anti-God misfits and criminals.

There is so much more garbage sweeping into the public schools.  There is only one solution. Get your kids OUT of Public School!