“I am not going to stand up to show pride in a flag for a country that oppresses Black people and people of color.” -Colin Kaepernick

If you remember, the controversy started when Colin Kaepernick, who rejected reality while giving himself over to the propaganda, refused to stand for the national anthem during a pre-season National Football League game. At the same time, Colin was protesting “racism” while supporting all 5 members of the race-baiting, hate group “Black Lives Matter.”

“I am not going to stand up to show pride in a flag for a country that oppresses Black people and people of color.” 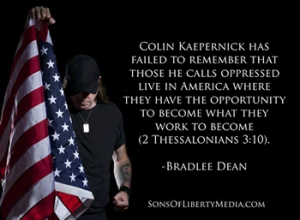 Oppressed, really? Colin’s life proves the opposite.  In fact, he signed a $114 million contract with the NFL.

Apparently, Colin has failed to remember that those he calls oppressed live in America where they have the opportunity to become what they work to become (2 Thessalonians 3:10).

As a matter of fact, take a quick look at others that are oppressed as the “victim of circumstance,” Colin Kaepernick.

Oppressed?  I think not!

Colin also might want to take the time to take note of the fact that those who followed his lead in disrespecting the American flag just happen to be criminals.

Colin went on to say, “To me, this is bigger than football, and it would be selfish on my part to look the other way. There are bodies in the street and people getting paid leave and getting away with murder…”

That is would be admirable if Colin had his facts straight.

During a press conference, where the “useful idiots” in the media were eager to make him a fellow propagandist, Colin added insult to injury to his own message by wearing a shirt which had photographs of the 1960 meeting of former Cuban dictator Fidel Castro and Malcolm X that read, “Like Minds Think Alike.”

And to think that Olympian John Carlos would look to Colin Kaepernick to be this generation’s civil rights leader. How irresponsible and reckless can one be? (Matthew 15:14; Hosea 4:6)

Friends, you cannot make this up.

The modern day civil rights wannabees and “demoralizers of the faith,” include not only Kaepernick, but also Al Sharpton, Jesse Jackson, and yes, don’t forget the new “Civil rights champion,” Oprah Winfrey.  Their definition of rights comes with a god that looks just like them (Exodus 20:4).

Dr. Alveda King spoke on a television show about her uncle, Dr. Martin Luther King, Jr., and the power of nonviolence. She shared that every participant in the civil rights marches in the 60’s was required to sign a pledge before they could participate.

What a great pledge for us to commit to in our daily lives! If enough of us would commit to this, maybe we could dramatically impact our world for the better.

However, the self-made civil rights leaders of today have left off their Bibles and their morals, as they debase themselves and reap nothing but mockery and reproach.

Let me contrast the original pledge with the modern version of the pledge, as demonstrated by their actions:

Here is the good news, Jesus Christ settled the issue over 2,000 years ago when He died on the cross. He died to save sinners, and it is for us to respond accordingly (Acts 2:38).

“We must learn to live together as brothers and sisters or we will perish together as fools.”