Christopher Wray was sworn in as the eighth Director of the FBI in a ceremony at the Department of Justice in Washington, D.C. Attorney General Jeff Sessions administered the oath of office. Director Wray is inheriting an agency that is so politicized that politicians, lawyers and law enforcement seem to have accepted this latest example of government and political corruption. 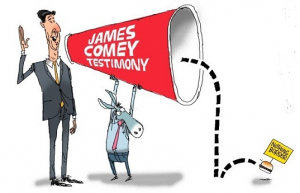 “It is the honor of a lifetime to serve as Director,” Wray said in a statement Wednesday. “I long ago grew to know and admire the FBI from my earliest days as a line prosecutor to my years as assistant attorney general. I am excited, humbled, and grateful, therefore, to have this chance to work side-by-side again with these fine professionals for the good of the country and the cause of justice.”

“After eight years of radical-left orthodoxy taking control within America’s once premier law enforcement organization, President [Donald) Trump believes he has appointed an FBI director who will carry out his duties.

“Chris has the experience and the strength of character that the American people want in an FBI Director,” said Attorney General Sessions, adding that he looked forward to working with Wray every day to keep the country safe.

Attorney General Jeff Sessions today issued the following statement on the swearing in of the new Federal Bureau of Investigation Director Chris Wray:

“Moments ago, I had the honor of swearing in Chris Wray as our new Director of the Federal Bureau of Investigation.

“Chris has the experience and the strength of character that the American people want in an FBI Director and I congratulate him for being overwhelmingly confirmed to that post and look forward to working with him every day to keep America safe.

“As a former federal prosecutor and head of the Department of Justice’s Criminal Division, Chris Wray has successfully prosecuted terrorists, drug kingpins, and white-collar criminals. He has earned the respect of his colleagues at DOJ, receiving our highest honor, the Edmund Randolph award, and bipartisan support in the Senate.

“I am confident that the FBI, the premier investigative agency in the world, is in great hands with Director Chris Wray at the helm.”

Reports coming from the nation’s news organizations have indicated that members of the FBI have turned their agency into a treasure-trove of leaked classified information.

Also, it was discovered that the acting director of the FBI has a wife who ran for office as a Democratic candidate and she received a half-million dollars from the Democratic Party while her husband led the email investigation on presidential candidate Hillary Clinton.

In addition, reports allege that the FBI’s General Counsel James A. Baker leaked information to reporters. And, of course, you had the fired FBI Director James Comey leaking documents he wrote about the U.S. President. He admitted he turned over the FBI-owned documents to a professor friend who in turn gave them to a reporter at the New York Times.

During the Obama administration, the FBI with all of its power and resources became a “tool” of the Democratic Party and their news media partners.

“There are numerous questions about the ethics and judgement of the FBI’s top leadership, particularly Acting FBI Director Andrew McCabe,” said Judicial Watch President Tom Fitton. “These new lawsuits will help Americans ‘watch the watchers’ at the powerful FBI.”