Home/May 2019, Opinions/New Investigators Examine The Origins Of The Mueller Investigation

New Investigators Examine The Origins Of The Mueller Investigation

There must be “consequences” for those claiming Russian collusion if Mueller report shows none.  —Tucker Carlson

This is not a game! This is the president of the United States. This nation deserves full-time leadership and no further effort to subvert, to overthrow the presidency of Donald J. Trump.  —Lou Dobbs

When during their exhaustive 22-month investigation did Mueller and his team of Hillary supporting Democratic prosecutors realize they had no case?  Probably no later than at the end of 2017, but I’d guess from the beginning.  By the time Mueller was appointed on May 17, 2017, the FBI had been trying unsuccessfully for nearly a year to corroborate the bogus Steele dossier’s allegations.

Democrats and their complicit media are far worse than sore losers. They have done everything in their power to destroy President Trump from the day he declared his candidacy. They hate him, they hate his supporters and they hate anyone who righteously campaigned for him. 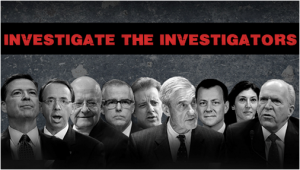 It is clear that the Department of Justice (DOJ) and the FBI participated in a fraud on the Foreign Intelligence Surveillance Court (FISC) in order to surveil U.S. citizen Carter Page.  Signing on behalf of the DOJ were Deputy Attorney General (DAG) Sally Yates, then-Acting DAG Dana Boente, and then current DAG Rod Rosenstein who each signed one or more FISA applications.

Rod Rosenstein approved the application to extend surveillance of former Trump campaign associate Carter Page. The NYTs claimed the FBI and DOJ’s application was based partially on research by investigator Christopher Steele, who compiled the spurious dossier.

When Rosenstein testified in a House hearing about FBI and DOJ abuses, he was asked by former judge Rep. Louie Gohmert (R-TX) about the FISA warrant he signed and Rosenstein looked to FBI Director Wray for the answer – a move that disturbed Gohmert.  Rosenstein said he signed Foreign Intelligence Surveillance Act (FISA) documents to spy on Carter Page and told Congressman Gohmert that he didn’t need to read every document he signed, that he merely needed to understand what’s in it.

Now that Rosenstein has stepped down, he is doing everything he can to cover his backside. But he was the one who gave an open letter of appointment to Robert Mueller to conduct an investigation confirmed by then FBI Director James Comey before the House Permanent Select Committee on March 20, 2017.  And it was Rosenstein who wrote the letter to President Trump stating Comey needed to be fired.

That started this entire nightmare-from-hell for not only the President, but his administration, supporters and the entire country.  The people who ran the DOJ were vicious dogs, and yes, our bloated government uses “national security” to cover up their crimes.

There is far too much on Rod Rosenstein that doesn’t make sense.  He is far too chummy with Mueller, Comey and Wray to really want true justice.  And few believe he didn’t want to wear a wire and record our President.

The Mueller investigation is finally over and $35 million American tax dollars have been spent on researching and investigating the cooked up lies of Hillary Clinton and the DNC “paid for” Steele dossier which led to this fictitious probe.  And all those tax dollars were paid to attorneys who hate Donald Trump.  Andrew Weissmann was the man given authority to hire the rest of the investigators for Robert Mueller, and Weissmann should have been disbarred long ago after the Enron case where he bent or broke rules to get false guilty pleas.

The resulting investigation prosecuted Americans for everything except the “collusion” it was supposed to uncover, many of whom will suffer lasting affects.

Weissmann was Mueller’s legal Pit Bull and the two of them worked hand in glove using the same rotten modus operandi they’ve effectively employed for over thirty years.  Those in their crosshairs even plead guilty to charges that weren’t crimes.  They also plead guilty to save family members, and they pleaded guilty when they’d previously been investigated by the government and found innocent. They pleaded guilty when those on the left did far worse and were never charged…i.e., Podesta’s and Biden’s.  Financial destruction was imminent for all targeted by Mueller.

Sidney Powell wrote the tell-all book, Licensed to Lie, and it exposed the corruption of justice especially in the Enron case.  Powell served in the Department of Justice for ten years in Texas and Virginia and has devoted her private practice to federal appeals for the past twenty years.  “All of the cases Weissmann pushed to trial were reversed in whole or in part due to some form of his overreaching and abuses,” Sidney Powell told The Washington Times. “The most polite thing the Houston bar said about Weissmann was that he was a madman.”  In early 2018, Sara Carter reported that Weissmann and Mueller were connected to two of the largest scandals in FBI history, and they got away with it.

What are the odds that the Durham investigation will bring the corrupt players to justice?  Certainly, there is hope with the new Attorney General William Barr.  However, knowing government machinations, I am not holding my breath.  Yet…justice is so longed for, and John Durham looks to be the man who could give it to us! 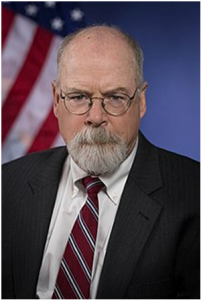 John Durham, the prosecutor appointed by AG Barr to investigate how Trump-Russia allegations emerged and spread within federal law enforcement, has already been looking into whether the FBI’s former top lawyer, James Baker, illegally leaked to reporters.

The U.S. attorney from Connecticut appears to have begun that work more than seven months ago, to judge from an underreported transcript of an October congressional interview with Baker.  Could it be that Acting U.S. AG, Matthew Whitaker, who succeeded Jeff Sessions and held the post from early November 2018 to February 14, 2019, tapped John Durham?

Mr. Durham has a long history of serving as a special prosecutor investigating potential wrongdoing among law enforcement and national security officials. He was appointed to the federal bench in 2017 by President Trump. Attorney Durham has even investigated the use or misuse of FBI informants.

In 1999, AG Janet Reno appointed Durham to investigate if FBI informants Bulger and his buddy, Stephen Flemmi had corrupted their FBI handlers.  In December 2000, Durham revealed secret FBI documents that convinced a judge to vacate the 1968 murder convictions of the four other FBI informants because they’d been framed by Robert Mueller’s FBI.  Two of those four men died in prison.  Mueller kept 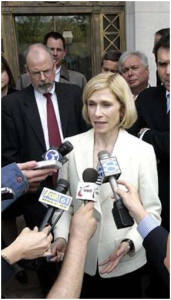 four innocent people in jail for years to protect the informant status of Whitey Bulger, a mass-murdering Boston mobster who ended up dying in California, and it ended up costing American taxpayers $100 million plus in civil judgments.  For the full story, purchase John Milkovich’s book, Robert Mueller: Errand Boy for the New World Order.

Former federal prosecutor, Nora Dannehy agreed to join Durham two months ago.  Dannehy prosecuted complex political corruption, including cases resulting in the convictions of former Connecticut Gov. John G. Rowland and former state Treasurer Paul Silvester. In 2008, she was assigned to Washington to investigate whether prosecutors in the President George W. Bush justice department had been fired for political reasons.

William Barr has enlisted the help of the CIA to investigate whether the FBI’s surveillance of the Trump campaign was motivated by partisan bias.

Is this a danger sign or an indication that someone highly knowledgeable is on the case?  Christopher Wray is part of the Deep State; he’s covered for many of the corrupt in the FBI and made derogatory remarks regarding our President.  He should never be involved.  As for Gina Haspell, we don’t know where she stands.

For eighteen months we’ve not heard a peep out of John Huber, he’s MIA and as a U.S. attorney who oversees federal prosecutions in the District of Utah, we should have heard something.  Even Jim Jordan has commented that Huber is like “Where’s Waldo?”  Where’s Huber?

There has been nary a public peep from U.S. Attorney John Huber, the man Jeff Sessions assigned to get to the bottom of things.  Likely witnesses say Mr. Huber has never contacted them, and members of Congress say they are still in the dark despite regular pleas to see progress.

Victoria Toensing, a former Justice Department prosecutor and now a private lawyer, with her husband, Joe diGenova, said of the Huber investigation, “It is a head fake, a farce.  It was an attempt by Sessions to get Republicans off his back. I’m embarrassed for them because they fell for it, and I hope something happens now.”  Link

Allegedly Huber is working collaboratively in the internal investigation with Justice Department Inspector General Michael Horowitz, but we have no idea when that report will be made public.

Barr told a Senate Appropriations subcommittee hearing, “I am going to be reviewing both the genesis and the conduct of intelligence activities directed at the Trump campaign during 2016. I think spying on a political campaign is a big deal, I think spying did occur, yes.”  The mainstream media hates that he used the word “spying,” but Barr has openly said it’s a perfect word to use.

And now, Barack Obama’s corrupt officials, including former Attorney General Eric Holder are all lashing out at AG Bill Barr because he has launched a massive investigation into the origins of Spygate.

They’re even harping at each other because of their fear of what John Durham’s investigation might lead to… perhaps grand jury indictments for many of them.

We can only hope!

P.S. NewsWithViews needs your help. Tirelessly, our CEO works to bring up-to-date news to our readers.  We’ve lost both advertising and twitter because of censorship by the enemies of freedom. It’s up to those who love freedom and the truth to help us survive. Tell your friends to sign up for daily emails, and please consider monthly donations to keep us alive. The writers at NWVs are not paid, we do this to save our beloved country for our children, grandchildren and descendants.  Please help.  Donations can be sent here. If possible please use PayPal.