No Arrests Means NO Crimes

When a tree falls in the woods and there is no one there to hear it, does it still make a sound? When no court will allow evidence of a crime to be presented in their chambers, is there still any evidence? When evidence of criminal activities doesn’t result in any arrests, were there really any crimes committed?

This is the very strange and highly dangerous world Americans find themselves in as we enter 2021 on the heels of the most fraudulent election cycle in 244-years of U.S. history.

According to democrat politicians, judges, lawyers, and the news media, “there was no election fraud in 2020.” This claim is made entirely on the basis that no court in the country has agreed to review any evidence of the fraud in their courtrooms. Every court has taken the Sergeant Shultz “I see nothing, I hear nothing, I know nothing” position, as if ignoring the evidence somehow discredits the evidence, or makes it vanish.

What the courts have actually done is deny due process of law on the most critical case of political corruption in our 244-years. They have violated their oaths, the Constitution, the Bill of Rights and every legal American and in so doing, they have all but guaranteed the total collapse of the USA.

The courts, all the way to and including the U.S. Supreme Court, have eliminated themselves from the equation. They are no longer a legitimate active part of our constitutional form of government. They have removed themselves from the process of justice and placed justice in the hands of the American people. The Article III branch of the Federal government (the Judiciary) no longer holds any constitutional authority over anything! They have totally abdicated any lawful authority over anything at this point. They are total sellouts, with the exception of Justices Thomas and Alito.

On January 6th, we will learn which members of Congress have any honor and which ones are also total sellouts, as Congress meets to accept or reject fraudulent presidential electors for two worthless criminals…Joe Biden and Kamala Harris.

Allegedly, more than 100 House Representatives plan to object. At least 106 Representatives joined the Texas Supreme Court case against the fraudulent states, only to watch that court refuse to keep its oath. All 106 should object on the 6th or they were just grandstanding in the Texas case.

But the U.S. Senate appears committed to standing down, allowing the outright theft of the 2020 elections and our country, for their own personal profit motives. The Article I branch of our Federal government (Legislative) is poised to collapse on the 6th of January. If Congress affirms criminal Biden and Harris to sit in our White House, Congress will walk away from their oaths and lawful authority, just like the courts have.

Meanwhile, our Department of Justice and Federal Bureau of Investigation have been sitting on massive volumes of treasonous activities committed by countless political officials at the Federal, State and Local levels for years, maybe for decades now.

They know that the 2020 elections were full of fraud. They knew long before the elections that they were sitting on damning evidence of international corruption by the Biden family and others. They have openly stated that they would not release any of that evidence “because it could alter the outcome of the elections…”

That’s akin to saying they won’t release proof that your babysitter is a child molester, because it might cause you to fire your babysitter. That’s a level of corruption that no country can survive!

At the end of the day, if criminals are not arrested and charged for their crimes, then there was no crime. The same fraud used on November 3rd is currently being used in Georgia for two senate runoff races that will determine control of the U.S. Senate on January 5th. We should expect the same fraudulent results when the same fraudulent systems remain in place.

All of this leaves the future of our Constitutional Republic, freedom, liberty, and justice, in the hands of President Donald J. Trump and his 74-million voters, which is why President Trump is calling all 74-million voters to D.C. for the January 6th Congressional meeting to certify 2020 election results.

The Democrat D.C. Mayor is doing all she can to prevent Trump supporters from being able to get anywhere near the capitol grounds on the 6th. READ HERE 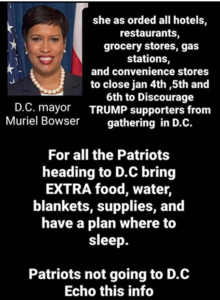 From Tuesday, January 5, 2021 through Thursday, January 7, 2021, multiple First Amendment demonstrations are expected to occur in the District of Columbia. In conjunction with these demonstrations, there will be parking restriction and potential street closures that motorists should take into consideration:

15th Street from I Street to K Street, NW (west side of McPherson Square)

17th Street from I Street to K Street, NW (east side of Farragut Square)

The clock is running down on America. The Judicial branch is corrupted beyond salvation, without a total house cleaning. The Legislative branch will choose its future on January 6th. Odds favor they will commit political suicide on that day and join the Judicial branch as a totally unlawful and irrelevant branch of a failed government.

President Trump is running out of options and time… If no one guilty of these treasonous crimes is arrested for their actions before the 6th, then no amount of evidence or objections will be taken seriously on the 6th.

No arrests mean that there were no crimes committed… simple as that!

If no one is arrested, then what are Trump supporters expected to do in D.C. on the 6th? Take matters into their own hands and provide street justice themselves? Trump has all the constitutional authority he needs to resolve this matter legally and arrest critical players. If he doesn’t do it, he is highly unlikely to survive 2020 and so are we…