No Negotiating With Iran’s Mullahs

On July 14, 2015, during the Obama presidency, Iran and six world powers known as the P5+1 (China, France, Germany, Russia, the United Kingdom, and the United States) signed the Joint Comprehensive Plan of Action (JCPOA), known as ‘Iran Nuclear Deal’ with the intention to marginalize Iran’s nuclear program and monitor it in exchange for relief from nuclear sanctions. This deal clearly benefited the Islamic Republic and left the door open for Iran to secretly continue with its nuclear ambitions. In other words, it was a terrible deal. President. Trump must understand that no new deal will ever change the Mullahs’ behavior.

“The Iran Deal is a symptom; the Mullahs are the disease.”

On the campaign trail in 2016, Donald Trump called the Iran nuclear deal “the worst ever.” Keeping his campaign promises, on May 2018, President Trump, withdrew from the Iran nuclear deal, and restated crippling sanctions on Iran. While Israel stood firmly with the President’s action, European allies Germany, France and the UK said they had “regret and concern” about Trump’s decision and planned to continue abiding by the agreement. 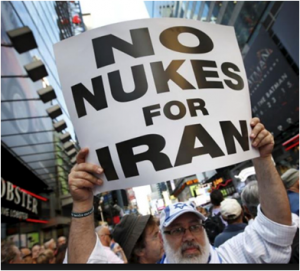 The best predictor of the future is the past. The fanatic Mullahs are proven liars. Their record is one of deception, dissimulation, treachery, violence and much more. These Quran-trained and directed agents of a wrathful Allah must never be trusted. They are master schemers. They have been in the business of scheming for centuries. While Trump has perfected the “Art of the Deal,” the Mullahs have perfected the art of deception. History will prove that President Trump did the right thing.

In dealing with the ever-cheating and conniving Mullahs, the President needs to realize that these vile men of Allah are also long-term planners. They have messianic plans to rule the world someday. They are also superb practitioners of the art of cheating. In this practice, like in the game of poker, much depends on how one plays their hand. In the game of deal-making, beating around the bush is a standard operating procedure. They know that weak-willed Westerners feel productive when they “talk,” and engage in “negotiations.” These activities do nothing; but then again, accomplishing anything other than advancing their own careers and generating an undeserved sense of self-importance is never the goal of pinheaded diplomats.

The villain Mullahs have been deceiving and playing the Iranian people, particularly the masses of the religiously fanatic, long before either Israel or the U.S. existed. They are very good at their game. For as long as there are donkeys there will be those who ride them is a Persian saying. That should explain the rule of the Mullahs. They ride, they have been riding for centuries, and they like it.

As I see things now, the world is headed toward a dangerous path. The danger of the bomb in the hands of the Mullahs has not disappeared, despite what the mainstream media and the Useful Idiots claim. The Mullahs are intent on getting the bomb and the U.S. and Israel are equally intent at not letting them get it. Israel has a huge stake in this since it is easily within the range of the Islamists’ fire.

Now, there are those simpletons that contend that mutual deterrence will prevent the Mullahs from ever firing their nuclear missiles at Israel because that would amount to mutual annihilation. The “mutual deterrence” argument may work in state-to-state confrontations. It apparently has worked in the past and the hope is that it will work in the future. However, the mutual deterrence argument fails when a non-state entity is the adversary. The Mullahs don’t have to lob a bomb at Israel or at anyone else to inflict huge damage. They can pursue their cause of death and destruction by simply providing their killers with dirty bombs in a suitcase.

They will secretly share some of their smaller nuclear devices to their fanatical followers to sneak them into Israel or for that matter anywhere else in the world! There are so many problems with this terrible fix that I don’t want to bore you with them. As I see it, this lunacy must be stopped. We just can’t sit idly by and watch this insanity play out.

My greatest hope is the Iranian people would somehow free themselves from the Islamic yoke and dislodge the Mullahs off their bent backs. A non-Islamic democratic Iran is an answer to a prayer for our people and the world. But the genocidal Mullahs and their goons have no compunction about beating, arresting, raping and killing anyone who dares to oppose them.

As the saying goes, power is prized, and it is very addictive. No one likes to give it up if they don’t have to. It is even aphrodisiac, according to Henry Kissinger, who was one of the most powerful men during the Nixon era. He was asked why so many women swoon over him given that he was neither young nor handsome. He answered, “power is aphrodisiac.” It’s amoral, just like science and technology. They are tools. In the hand of the righteous they do immense good. In evil’s hands, they wreak great harm. While the Mullahs are busy dragging Iran to the brink of a nuclear holocaust, they are dipping the name of our great nation together with us Iranians into sludge.

The world leaders must realize that the delusional Mullahs are in this deadly game to the very end. They believe they can win by either bringing the non-Islamic world to its knees and ruling the world or setting up the conflagration that supposedly will prompt their hidden Imam to appear and establish his kingdom. Not even the all-out nuclear exchange can be ruled out. Islam is a religion centered on death with the eyes of the faithful fixed on the afterlife and its promised eternal pleasures.

For years, I have spread the alarm to the world that it is a fatal miscalculation to sit and watch this eventual catastrophic event happen. It is little more than an exercise in denial to believe that nothing bad will happen, and that the inept Mullahs will likely shoot themselves in the foot instead of wreaking havoc on the world.

I also have pled that we should have helped the Iranian democratic opposition such as Prince Reza Pahlavi. In recent days, the Iranian protesters in Iran have chanted his name to return and send the death-bearer Mullahs back to their mosques.

I must strongly warn my fellow Americans not to repeat President Jimmy Carter’s monumental folly that brought the infamous Ayatollah Khomeini to power and birthed Islamist jihadism by standing behind Maryam Rajavi, the leader of the notorious Mujahidin-e Khalq or (MEK), the most dangerous terrorist group that even abused and murdered their own members for trying to defect or escape from Camp Ashraf in Iraq. It would be tantamount to betraying the ideals of America — the flag holder of freedom in the world.

“Those who do not learn history are doomed to repeat it,” Warned George Santayana. By now, the saying has become a cliché. Why has it become a cliché? Because it is true. History is replete with innumerable cases of treachery where promises — some seemingly ironclads — are made and blatantly broken at the earliest opportunities.

In short, former President Obama picked the Mullahs over the Iranian people during the Green Revolution in 2009. The Trump administration must do the opposite and support proud Iranians and call for freedom right now and help them to end this regime once and for all.