Home/January 2021, Opinions/No President In History Has Been Treated So Badly

No President In History Has Been Treated So Badly

“As many have noted, Donald Trump’s presidency is an insurgency. Mr. Trump himself is the quintessential insurgent, doing battle with a disingenuous and entrenched establishment.” —Shelby Steele, black conservative author, columnist, documentary filmmaker

“Please don’t begin to believe that the American political establishment is anything but a corrupt puppet of oligarchy.”  —Alex Pareene, American writer and editor

There were 44 presidents before Donald Trump.  A few were great presidents.  Some were effective presidents and some were ineffective or corrupt presidents.  Three presidents were impeached in the U. S. House.  However, they weren’t convicted in the Senate trial because either there was no evidence of high crimes and misdemeanors, or they weren’t convicted for purely political reasons, or they couldn’t meet the two-thirds majority to convict.  Richard Nixon resigned from office before an impeachment resolution was passed in the U. S. House.  Had he not resigned, impeachment was a virtual certainty. 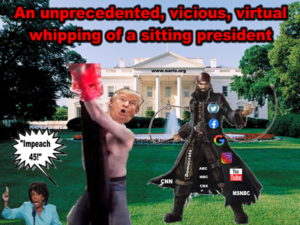 That the press has always had an adversarial relationship with past presidents is not in dispute.  Thomas Jefferson, our third president, had his own problems with the press.  In response he said, ”Were it left to me to decide whether we should have a government without newspapers, or newspapers without a government, I should not hesitate a moment to prefer the latter.”

Still Jefferson was frustrated and displeased by the partisan nature of the press.  He retorted that,  “nothing can now be believed which is seen in the newspaper.  Truth itself becomes suspicious by being put into that polluted vehicle.”  Does any of this sound familiar.  Nothing seems to change.

Fortunately or unfortunately, depending on your perspective, all presidents before Trump did not have to contend with the obvious collusion that now exists between filthy rich Democrat billionaires, the press, social media, academia and the Democrat Party.  For almost five years they attacked Trump and his family, not only hourly and daily, but relentlessly and unmercifully as well.  Trump became the butt of all jokes and the whipping boy of all criticism.  The attack on Trump really started when Barack Obama “roasted” Trump at the 2011 White House Correspondents Dinner.  Perhaps that is why Trump decided to run for President.

Even today the Democrats seemed determined to crush Trump even more, with the sham of an impeachment trial in the Senate.  Some Republicans, who should be on Trump’s side are equivocating, or putting their finger in the air to determine which way the political wind is blowing.  The two words that come to mind are “political cowards.”  There are way too many “political cowards” in our alleged Republican Party.  Liz Cheney and nine other Republicans are suspicious candidates for the “political coward” award.

President Trump did nothing to rise to the level of High Crimes and Misdemeanors and they know it.  His second impeachment in the U. S. House was just as politically groundless as his first, without concrete evidence or substance.

Some of Trump’s troubles were magnified by his own and sometimes petty demeanor, as were manifested in some of his tweets. The press picked up on his shortcomings and beat him to death with them, all the while refusing to acknowledge the many positive actions he took for America and Americans of all ages, gender and races.  Totally ignored is a list of accomplishments that eclipsed the accomplishments of any past president.

But Trump made an incalculable error, an error he may not have seem himself before it was too late.  He ran for president as a total outsider, beholden to know one.  He threw a log into the gears of the Establishment from both parties and ignited a firestorm of opposition from the federal Establishment itself and from the federal bureaucracy that some now call the Deep State.

Unbeknownst to most of the American people, that Establishment and Deep State and their corporate, union, socialist, environmental and globalist enablers, fully infected with the Progressive virus, have been building up for decades and its entrenched power, like a wounded lion, will attack anything that threatens it.  Donald J. Trump was a direct threat to the Establishment and Deep State, even after he left office.  That is why they have to crush he and his movement with impeachment, de-platform him from social media and silence him and his entire cabinet and support staff forever.  That’s why they talk of labeling Trump supporters as domestic terrorists and the immediate imperative to re-program them.

The Establishment and Deep State are deathly afraid that Trump might still have political power and be able to keep the MAGA movement going.  Hell hath no fury than a freedom-loving, well-armed American when scorned and has his or her rights taken away.  Might he or she not think of insurrection, civil war, or revolution?  With enough pressure, thoughts become actions and the Progressives know it.  The only thing the Establishment and Deep State (the Swamp) fear from the freedom crowd is the possibility that they just might decide to challenge The Swamp’s power with violence, en masse.  Why else would they arm the U. S. capitol with 26,000 troops during Biden’s inauguration?

No matter how bad Trump was treated; no matter that there is a strong possibility that he lost the election due to massive fraud and voting machine tampering; his contribution to America and Americans in four years is unprecedented.  Had China’s Coronavirus not erupted on the scene, Trump would have been re-elected in a landslide.  No-nothing, intellectually challenged Joe Biden would have been relegated to the scrap heap of failed recent Democrat presidential candidates like Mondale, Dukakis, McGovern, Humphrey and Kerry.

With respect to massive voter fraud and voting machine tampering in the 2020 election, Hillary Clinton amassed 65,844,610 votes in the 2016 election and beat Trump by 2.9 million votes, even though Trump won the Electoral College.  How could anyone believe that Joe Biden actually received 81,283,485 votes in the 2020 election, a 23% increase for Democrats in just four years?  It is truly unbelievable and a blatant fraud perpetrated on the American people!  As Thomas Jefferson said, “you can’t trust the newspapers.”  Well neither can you trust an American election any more.  It has all the earmarks of an Iraqi election under Saddam Hussein, or a Venezuela election under Nicolas Maduro.  Surprise!  Surprise!  The dictator got 100% of the votes cast!

If there were any cooler heads in our midst that used logic and intellect to make their decisions instead of dipping into the deep well of emotion or political party blindness, it could easily be construed that Donald J. Trump was one of the best presidents America ever had if you objectively judged what he did for America in both domestic and foreign policy and not what he tweeted.  He should be applauded and heralded, not vilified, slandered, smeared, denounced and denigrated, all of which he was by rich billionaires, the news media, social media, the Establishment, the Deep State and the Democrat Party.  You can add a few Republicans to that list as well.

In recognition of his being, in our opinion, the best president we’ve ever had, we have created not only a special Medal of Freedom for Donald Trump, but a framed certificate to go along with the medal.  It is our intent to deliver the MEDAL and CERTIFICATE to Mr. Trump by special delivery as soon as possible after collecting as many signatures as we can.  We would like to present the Medal and Certificate to Mr. Trump in person, but the logistics of that may be more than we can accomplish.

If you would like to participate in and lend your endorsement and approval of the Medal of Freedom and the Certificate, we ask that you log onto our Trump MEDAL OF FREEDOM web page and follow the instructions contained therein.  This is designed to be a high quality endeavor, suitable for an extraordinary president that made us all feel good about America and being Americans.

It is no doubt that Mr. Trump has entered private life on a down note, having done so much for the American people and receiving little to no recognition for it.  We believe that receiving this Medal and Certificate from tens of thousands (or millions) of Trump supporters will lift his spirits and encourage him to emerge as the true leader of the Republican Party and the MAGA movement.

We hope that you will find it in your heart to lend support to this effort.  He deserves no less.  We ask that you forward the MEDAL OF FREEDOM web page to as many on your list as possible, pass it around to other venues, put it up on social media, write articles about it for on-line newspapers and magazines and send letters to the editors of newspapers applauding this endeavor.  Do something that will make you feel good about America for a change.