Home/February 2021, Opinions/No President Is More Deserving Of The Medal Of Freedom

No President Is More Deserving Of The Medal Of Freedom

CITATION TO ACCOMPANY
THE MEDAL OF FREEDOM

FOR EXCEPTIONALLY MERITORIOUS SERVICE AND EXTRAORDINARY CONTRIBUTIONS TO AMERICA AND THE GOOD PEOPLE OF AMERICA, ACCOMPLISHED THROUGH A LONG LIST OF POSITIVE MAJOR ACHIEVEMENTS, IN SPITE OF OVERWHELMING ODDS AND OBSTACLES AND IN DEDICATION TO SERVICE ABOVE AND BEYOND THE CALL OF DUTY

For four years, the positive leadership, sound judgment, and unceasing efforts of President Donald J. Trump, have been major factors in strengthening the economy and security of the United States and its allies and delivered a future of greater promise and opportunity for American citizens of all backgrounds, races, religions, creeds and genders. 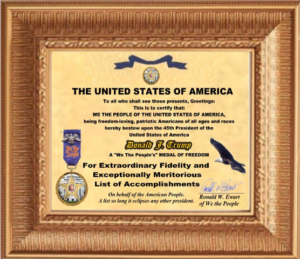 Under his guidance and the effectiveness of his actions in foreign policy he has bolstered the will and determination of our allies to resist aggression. The common defense of free nations has been greatly furthered by his frequent discussions and face-to-face meetings with foreign leaders both abroad and at home. His working with the Israelis and four Arab nations resulted in peace and trade treaties between once sworn enemies.  For that effort he has been nominated for four (4) Nobel Peace Prizes.

He took several European nations to task for not funding the North Atlantic Treaty Organization (NATO).  As a result, several nations have begun to pay their share.  He is the first president to challenge China’s stated objective to be the dominant power in the world.  China is now internationally recognized as an extreme threat to the peace and security of the world.

Under his leadership, he reduced taxes and regulations to the benefit of the American economy in all sectors.  His tax initiatives brought billions of dollars back to American shores to be used in manufacturing and job creation.  He oversaw the negotiations in the Canada-Mexico-USA Trade Agreement, (USMCA) thereby eliminating the many flaws that existed in the old trade agreement under NAFTA.

His selfless devotion to duty and firm adherence to the basic principles and ideals upon which our country was founded have made possible his many major accomplishments in his quest to make America great again.  His list of accomplishments has been tallied on no less than 33 pages.  A link to those accomplishments can be found HERE.

President Trump gave people the hope that things actually could be better with the right leadership and positive actions by government to get out of the people’s way and let the capabilities, creativity and spirit of the American people solve many of their own problems.  A full belly, engaged in rewarding work, can be productive, prosperous and generous.  An empty belly is the deep well of hopelessness.  President Trump’s efforts gave millions of Americans respected work and full bellies.

In recognition of his outstanding and dedicated service and to the millions of lives he touched and inspired, “We the People” take great pleasure in presenting this Medal of Freedom to President Donald J. Trump.

Enduring a relentless assault on his presidency; pummeled by viscous attacks on his presidential actions; taunted by criticism of his family and his character; haunted by U. S. District court judges that thwarted his every move; hounded by Democrat politicians and bureaucrats, the mainstream and social media and pilloried by Democrat members of Congress, with some from his own party, President Donald J. Trump managed to devote his full time as president for and on behalf of America and the American people.  He fought for us and he paid a huge, unnecessary and unwarranted price for it.

His America First policy was what a floundering and listless electorate needed to pull them out of the dull drums of a failing economy and a general feeling that America was headed in the wrong direction, after the failed presidency of in-eligible to be president, Barack Hussein Obama and the corrupt Vice President “I never took a dime from China” Joe Biden.

From decreasing taxes and regulations, to jobs, to foreign policy, to military readiness, to international trade, to health care and to the Coronavirus, his focus was always on what is good for America and Americans.  He rejected globalism, socialism and radical environmentalism, all enemies of a free people.

The huge crowds that attended his rallies were a testament to his wide popularity.  He said what free Americans wanted to hear.  He took us back to the days of being proud to be Americans again; of being proud of American exceptionalism, prosperity and generosity; of being proud to have a job and be able to work and to cherish our freedom and liberty, the promise of our creator.

President Trump, beholden to no one, took on the Establishment and the Deep State.  He levied huge criticisms at the press for publishing lies and propaganda about he and his supporters.  No, he isn’t perfect but then none of us are.  He was dogged by his petty tweets that tended to overshadow his achievements and gave the press and social media the ammunition they needed to paint him in false colors.  If he made a mistake, it was for not fully assessing the power and entrenchment of the Washington DC Establishment and Deep State.  That immense political power, aided and abetted by social media and the press, along with massive voter fraud, cost him re-election.  The failure of his re-election bid was a huge, if not devastating loss for America and American freedom.

Meanwhile, the violent, looting, burning Black Lives Matter (BLM) cult is nominated for a Nobel Peace Prize as the real peace maker is drummed out of office by a socialist Democrat, gone totally insane, mob of government-dependent, blind party idiots.  Democrats, the news media and corporate America not only sanctioned BLM but gave it huge sums of money as well.  They turned a blind eye and ignored the rioting, burning, looting and violence by BLM and ANTIFA in cities all over America.

And no!  Trump did not cause the riots at the Capitol on January 6th, 2021.  The occupation of the Capitol on that day was pre-planned well in advance and designed to paint the Trump supporters as White Supremacists and domestic terrorists.  The Democrat un-constitutional impeachment of Trump for allegedly inciting insurrection is a purely political scam to discredit Trump more than they have already.  They are motivated by the raw emotion of unbridled hate for Trump who had the audacity to challenge the Establishment’s status quo in DC.

Nevertheless, in recognition of his service to his country and the American people, we strongly believe he should receive a “We The People” MEDAL OF FREEDOM.  (click on the link to view the medal and certificate)  In furtherance of that goal, we crafted a special Medal of Freedom, Certificate and Citation (shown above) worthy of President Trump’s exemplary service.  It is our hope to obtain a minimum of 100,000 actual signatures in 60 days to accompany the Medal, Certificate and Citation when we send it all to him in one package, at Mar a Lago, Florida.  You can access a PDF version of the signature page HERE, or upon your request we will e-mail you a WORD version of the signature page.  E-mail your request HERE.  Each signature page contains the instructions on what to do.

This effort will have no meaning or significance if we can’t get enough freedom-loving Americans to participate with their actual signatures.  Actual signatures have a much greater impact than the on-line, push-a-button, signatures.  Take a few minutes of your time and do something that will make you feel good about America again, in spite of what is happening in the nation’s capitol today.  The Democrats will eventually go too far and America’s pendulum will begin to swing right again, if it isn’t too late.

And speaking of going too far, Google HR 127 and read what the House Dem’s are planning for your guns.  The attack on the 2nd Amendment is several magnitude steps farther than the Democrats have ever taken gun control.  You won’t believe it and it will make the hair stand up on the back of your neck.  The words that will immediately come to your lips will be ….. CIVIL WAR!