Skip to content
Home/April 2018, Opinions/Noble Individuals Will Save America. Mob Rule Will Destroy It

Noble Individuals Will Save America. Mob Rule Will Destroy It

“Actually, in its essence, democracy is a totalitarian ideology, though not as extreme as Nazism, fascism or communism. In principle, no freedom is safe in a democracy, every aspect of the individual’s life is potentially subject to government control.  At the end of the day, the minority is completely at the mercy of the whims of the majority.  Even if a democracy has a constitution limiting the powers of the government, this constitution can be amended by the majority.

The only fundamental right you have in a democracy, besides running for office, is the right to vote for a political party.  With that solitary vote you hand over your independence and your freedom to the will of the majority.”  [mob rule]

By Frank Karsten, Beyond Democracy: Why democracy does not lead to solidarity, prosperity and liberty but to social conflict, runaway spending and a tyrannical government.

The American Founding Fathers created a Constitutional Republic.  In the last 120 years Progressives have turned America into an Absolute Democrat Oligarchy, where the Liberal Establishment buys off 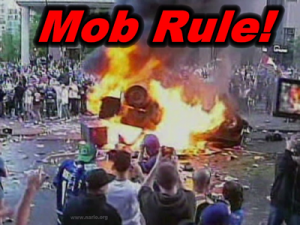 and exploits the weakest in the society for their votes with the funds in the public treasury and turns them into a voting mob, a mob that demands by force of law that the strongest and most capable among us must pay for the mob’s subsistence.  This is an exact definition of Karl Marx’s failed socialist ideology, “from each according to his ability, to each according to his needs.”  The Progressives have in fact, over time, created a government in America, under a distorted form of Democracy that uses and manipulates the weakest among us for the sole benefit of the manipulators and their hold on political power.

What it boils down to is that the weakest among us have been given an unconstitutional ironclad contract, fully supported by the absolute power of government, to “steal” by force, under mob rule, from those who produce goods and services.  This is enforced charity at the point of a gun.    The “gun” is held in the hands of a Gestapo-like agency known as the Internal Revenue Service, signed into law by your so-called government representatives.  Enforced charity makes a mockery out of voluntary charity.

Individuals, working either individually or collectively with other individuals, have been, are and always will be the movers and molders of a society, for good or evil.  They are ultimately the decision makers and the risk takers, whether those decisions and risks be of the small variety covering our daily lives, or the ultimately large decisions and risks that set the direction of cultures, countries, or hemispheres.  Such individuals can either do so for sound, common sense motives, or for totally self-serving ones.

Most positive human achievement comes as a result of efforts of and by an individual, not a society or a culture.  As a matter of fact, societies, cultures, religions and groups have generally stood in the way of most human achievements.  Scientific discoveries, improvement in the human condition, or positive advances of government, come about from individuals working either by themselves or with a few others.  A collective or a community didn’t invent the light bulb.  Thomas Edison, an individual, did.  It is extremely unusual for large groups to accomplish anything.  One only has to look at our local, state and federal legislatures and bureaucracies to see the truth in this statement.

If we must emulate someone, let us emulate the individual achievers.  If we must follow, then let us follow in the footsteps of those that pioneer and forge ahead no matter what the odds or what peril lays in front of them.  Intelligent, wise men and woman of vision forged the constitution of the United States.  Courageous, individual pioneers settled the West against all odds.   Now today, the individual spirit of thousands of entrepreneurs commence new businesses every day, risking their relationships with each other and their personal fortunes, no matter how large or small.  They put up with every conceivable obstacle thrown in their path, not only from market forces but also by government regulation and edict.

Nevertheless, individualism is the engine that keeps the wheels of a free economy turning.  Sixty to seventy percent of all jobs in the United States are created by individuals running their own businesses.  What a country we live in.  What a tribute to its resilient peoples.  We are people of guts, courage, intellect, enterprise, fortitude and compassion.  We are individuals in a sea of individuals and there is no strength on Earth that can match ours, in spite of our perceived troubles.  That strength and power is a direct result of individuals and individual expression, living free under a Constitutional Republic.

But individual achievement in the United States today is getting a bad rap.  It is either maligned or heavily taxed.  As we move towards the collective, we either have to be part of some group to get accepted and our individual beliefs, goals and motives must be subjugated to the needs of that group.   Our public schools are institutions of indoctrination, infiltrated with the ideology of the collective.  In short, our kids are, en masse, being brainwashed in the Progressive ideology and they and their parents are none the wiser.

Man is driven by the one unique human trait that apparently does not exist in other creatures that share this planet with us.  He is driven by that all-present, individual, “joy of wonder” and to go where no man has gone before.  We are going to the stars one day and nothing anybody can do will get in our way.  No amount of fear of the unknown, or nay saying about financing will stop us.  The strength, power, creativity and spirit of the incomparable individual will carry us there.

We, as individuals, have a significant obligation to ourselves and to our children.  We have the obligation to defend our freedom and to learn everything we can about everything we can know in our lifetime that we can document and prove beyond a reasonable doubt, and then pass as much of that information on to our offspring.  We have an imperative to do no less.  We have a responsibility to not abdicate this task to others.  We shouldn’t let our doctor, our teacher, our lawyer, our priest, or clergy, much less our government, make decisions for us.  They can be a source of information or counsel, but the ultimate decision maker is us, that is, if we value our freedom as individuals.

What we need to do, more than anything else is to educate our people in all of the true knowledge we have discovered over the last 5,000 years and to foster unabashed individualism.  Collectivism is a killer of freedom.  Knowledge is the great equalizer among men.  If all individuals possess the same knowledge, it is much more difficult, if not impossible, to “Lord” over the other, thus muting the necessity of war.

The problem in this country and every other country for that matter and every other people that exist on this earth is not poverty.  It is not the disparity between poverty and wealth.  It is not pestilence, or flood, famine, earthquake, or any of these things.  It is the attempts by the Progressive mob to strip individuals of their freedom, liberty and property rights.  It is pandemic ignorance.  It is also the efforts of the Absolute Democrat Oligarchy to break the backs and spirit of the individual.  The power of the individual is a dictator’s worst nightmare.

What we need is a way to get more people motivated to seek that truth and their own “point of reference” and the solid basis of why their particular “point of reference” is relative to them.  And we must resist with all of our might, government and special interest group’s relentless perversion of the truth for their own ends.

We need to eradicate mysticism, propaganda, lies and distortion and replace them with the truth and universal, provable realities.  And then we must teach our children to question even the provable realities and always leave room for a different perspective, a different view, or new information.

There are some real basics here and the hard cold truth of the matter is, we are individuals and no matter what the mechanism for getting here, we come into this world absolutely alone.  No other person can live with us inside our minds.  No other person can be part of our soul.  We are here unequivocally, irreversibly alone.  As individuals, we must face all the trials and the joys and the sickness and the sorrow and death absolutely alone.   Sure, others can hold our hands and stroke our brow, but nobody will die with us and although we won’t say it out loud, most of us know it instinctively.  In every sense of the word, we are totally unique individuals and only we occupy our “space” and our “time”.  But that individuality is the true source of our strength, power and creativity.

The stark reality is that if we destroy our God-given, natural freedom that allows our unique individuality to blossom, we will descend into the Hell of the collective and it will take a bloody revolution to restore freedom and liberty so that the individual, once again, with all his strength, power, beauty, compassion, spirit and the joy of wonder, will lead man on the never-ending, exciting journey to explore our Universe.  The Universe is waiting, if we don’t stumble and get in our own way.

It took individuals with guns to wrest our freedom from a King some 240 years ago.  It took the power of American freedom, production, raw materials and guns to conquer several megalomaniac dictators in two world wars.  It will take strong, united individuals that believe in the sanctity and the absolute right of freedom to wrest control from a government that has morphed into an Absolute Democrat Oligarchy.  It will take the power of liberty in individual thought, expression and action to quash the Oligarchy, the mob and the American Bolsheviks, to restore our individual, God-given, natural rights.  If it can’t be done peaceably, it may even take individuals with guns ….. again!  If the people do not believe that they are individually sovereign, as nature intended, then neither peaceful means nor guns will restore our freedom.

Sadly, none of this will change the minds of the average urban dweller whose sole means of survival is government.

However, if you believe that you are individually sovereign, you should consider signing our “Declaration of Individual Independence and Reaffirmation of American Constitutional Sovereignty” Petition.  Many others have already.