Normal, Reasonable and Prudent People of America Will Eventually Win

WHAT IS NORMAL, REASONABLE AND PRUDENT IN LAW: “Reasonable or Prudent man is a hypothetical person used as a legal standard especially to determine whether someone acted with negligence. This hypothetical person exercises average care, skill, and judgment in conduct that society requires of its members for the protection of their own and of others’ interests. The conduct of the reasonable man serves as a comparative standard for determining liability. For example, the decision whether an accused is guilty of a given offense might involve the application of an objective test in which the conduct of the accused is compared to that of a reasonable person under similar circumstances.  Reasonable man is a term commonly used in tort and criminal law. This standard is used to judge the conduct of an ordinary person only. Usually persons with greater than average skills, or with special duties to society, are held to a higher standard of care. For example, a physician who aids a person in distress is held to a higher standard of care than is an ordinary person.”  (Source: US Legal website – www.uslegal.com)

Insanity never lasts forever.  It rises and falls like the tide.  Sometimes high tide is a long time in coming but eventually it does, like so many natural rhythms in nature.  Sadly, in America, we are in the throws of the low tide of insanity.  Up is down.  Right is left.  Logic, reason and common sense have taken a holiday. 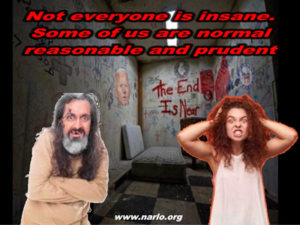 Foreign ideologues have taken over our world.  The people are confused and frustrated with the policy makers.  Problems that used to be manageable are now out of control, like voter fraud, crime, the border, the Wuhan virus and serious issues with the vaccine.  Freedoms we once took for granted have evaporated under the governmental demands of public health and safety.  The Constitution has been suspended or so perverted that it has become meaningless, if not irrelevant.  We’ve got four-star generals mandating the teaching of racial gibberish to our troops and navy men under the so-called Critical Race Theory.  We have a major crisis at our southern border, created on purpose by presidential executive orders.

Our foreign enemies have become emboldened because our projection of power has grown weak through negligence and appeasement by our elected leaders.  The vision of those leaders for our nation has become grotesque and distorted and in many cases, insane, totally out of proportion with the logical realities, much less common sense.

When confronted with the facts, our leaders lie to us.  Propaganda is the prevailing news of the day, not objective or observable events.  Social media corporations, with immense financial and political power, filter our news for us, but always in line with their own agenda.  Their agenda is full support for the socialist Democrat regime and censorship of any other ideology or information

Their alleged science is perverted and slanted in favor of the Democrat playbook or the prevailing so-called advice of our health agencies or weather predictors that have proven to be false.  Science from credible sources is censored, omitted, restricted, altered, or pulled from the platform, never to be seen again.

In spite of all this turmoil, confusion and lies by those who would disrupt our ordered lives, tear down our institutions of freedom, weaken our military, erase our history and dismantle our Constitution, there are still people in America who are the epitome of normal, reasonable and prudent.  They are the people who live out their lives with the love and the bond of family.  They live in a world of gratitude, love, happiness and honor.  They work hard and sometimes play hard.  They believe in a higher order.  They understand logic, reason and common sense.  They have a deep sense of what is right and what is wrong.  They reject White Supremacy and Critical Race Theory and other socialist ideology.  They are the sane core and foundation of our culture.  Some call them the silent majority.

Finally, after enduring the growing insanity of the left for way too many years, the normal, reasonable and prudent people are pushing back.  The socialist Democrats finally went too far.  Disgruntled parents are beginning to show up at school board meetings in large numbers and questioning the radical racial decisions of those who set school public school curriculums.  The voters are recalling corrupt politicians.  It’s quite likely that this dissatisfaction will extend to the voting booth come November of 2022.  Still, one wonders why it took so long?

The endurance of the human species to the injustices of mankind, or the ravages of nature, are always an amazement to most of us.  To endure poverty, or endless wars, or the cruelty and brutality of maniacal leaders, demonstrates undauntable human will and resilience.   The preacher Edwin Hubbel Chapin wrote that, “Not in achievement, but in endurance, of the human soul, does it show its divine grandeur and its alliance with the infinite.”  Nevertheless, how is it that we take so long to finally expel the bad guys?

If ever in American history was it more necessary for the normal, reasonable and prudent people of America to stand up and rise up against the tyranny and corruption of the vicious enemy that has invaded us and taken over our collective souls, it is now.

The invasion and corruption comes from two opposing and warring agendas.  One of the agendas, the socialist side, is blatant, radical and in your face.   The other agenda, the so-called conservative side, hides in the shadows and conducts its evil deeds behind closed doors.  The socialist side believes in the privilege and superiority of the collective.  The conservative side purports to be advocates for our individual freedom and unalienable rights but their actions speak otherwise.

Regretfully, it appears that both sides are equally corrupt.  Both sides are the pawns of powerful lobbyists that get their way, even though “their way” goes against what is right in a just world.  Power is the sustenance of the aristocrats and ruling class.  Money is their God!  They believe that fidelity and honor are for the stupid and naïve.  Sexual lust rounds out the four corners of their reason for living.

Justice has become not what is equal under the law but who has the most money to buy the best lawyers and can pervert the law into whatever they want it to be.  Jeffrey Epstein was a prime example that essentially got away with sodomizing under age girls using his wealth and power to further his deviant behavior.  When he got caught and prosecuted for his heinous crimes his punishment was a slap on the wrist.

Justice used to be blind but now it wickedly winks and grins from behind the blindfold.  The scales of justice have become lopsided in favor of the corrupt and powerful.  Instead of exposing the corruption and the malfeasance of the powerful, the 4th estate has climbed into bed with the corrupt, powerful, dishonored and unholy.  Instead of investigating and reporting, they lie, advocate and propagandize.  Truth is the first casualty of a bastardized press.

When are the normal, reasonable and prudent people of America going to peacefully come to the rescue of freedom and individual rights, expose the corruption and restore honor, logic, reason and common sense to our daily lives.  \When are they going to push the insane back into the asylum?  It seems the push back is beginning to happen.  If they don’t win now, they will win later because normal, reasonable and prudent are the natural order.

Still, the politically insane are radical, insidious, intolerant and tenacious. Effectively pushing them back to the asylum is not going to be easy. Nor is it a job for the few or the timid. It is a job for the tens of millions of the normal, reasonable and prudent persons among us.

Read over 500 powerful conservative articles like this one “HERE.”