Nothing Will Change Until The People Act

“It is not the critic who counts, not the man who points out how the strong man stumbled, or where the doer of deeds could have done better.  The credit belongs to the man who is actually in the arena, whose face is marred by dust and sweat and blood, who strives valiantly, who errs and comes short again and again, who knows the great enthusiasms, the great devotions, and spends himself in a worthy cause, who at best knows achievement and who at the worst if he fails at least fails while daring greatly so that his place shall never be with those cold and timid souls who know neither victory nor defeat.” —Theodore Roosevelt

Just shy of thirty years ago, on June 5, 1989, in the incident in Tiananmen Square, China, a lone and very brave, if not somewhat foolish man, stood out in front of a row of battle tanks, using his body as a symbol of protest against dictatorial authority.  This nameless man managed to stop the advance of the tanks by moving in front of the first tank, every time it positioned to go around him.  Later, the man jumped up on the tank and had a conversation with the driver.  On-lookers managed to pull him off of the tank and he was absorbed into the watching crowd.  One eyewitness to the event believes that the man was hauled away by secret police, tortured and then executed, as the man never appeared in public again and the Chinese government could not, or would not, produce him.  Although many accounts purport to know what happened to him, the “tank” man’s name or his final fate, to our knowledge, has never been verified.

But what is most important in this story is not what the man did and the courage it took to do it, 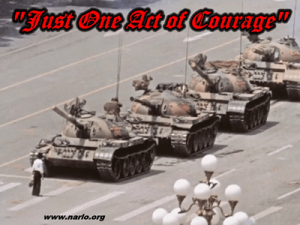 but how his courageous actions affected others.  Because you see, courage is infectious.  One man, in act of selfless bravery, with no regard for his own safety, by stopping those tanks, even briefly, started the germination of a seed of freedom in the minds of hundreds of thousands of people, held in bondage, but longing to be free, all around the world.   Out of those hundreds of thousands another individual will stand up, and then another and then another, because you see, courage is infectious.

In April of 2014 hundreds of armed civilians from around the country challenged the authority of the Bureau of Land Management (BLM) to round up Nevada rancher Cliven Bundy’s cattle.  The BLM stood down and released the rounded up cattle back to the rancher.  When the people stand up in large groups and punctuate their demands with a show of force, government has no choice but to stand down, or initiate a blood bath like Waco and Ruby Ridge.  Where are the civilians that will emulate the hundreds of brave men and women that came to the Bundy ranch to challenge the government and stand up for freedom and property rights?

Landowners along the Jarbidge River near Elko, Nevada drove the federal government agents out of town fearing for their lives, for actions by the government and environmental groups against the locals’ livelihood, rural roads, recreation, forests and rivers.  The rural Elko landowners formed what they called the “Jarbidge Shovel Brigade” to take on the federal and local authorities.  They openly defied the federal authorities with action and the show of force.

In northern California and southern Oregon along the Klamath River, the local landowners formed the Klamath Bucket Brigade to fight against removal of four dams.  Sadly, the Indians and the environmentalists won in order to save a two-inch fish.

The environmentalists and tree huggers want to have it both ways.  They want to save the Killer Whale and the salmon at the same time ….. no matter what it costs the taxpayer.  Where are the Americans that will bring sanity to an insane environmental world?

Nevada rancher Cliven Bundy started a forest fire with one match.  He ignited the flame of freedom in the hearts and minds of millions of Americans, some of whom decided to put their money and their lives where their mouths were.  They voted with their feet in positive action and some of them were willing to vote with their guns if it became necessary.  They rose up and the government backed down.  It is not an unfamiliar scene.  We have personally witnessed government backing down locally as well, when the people rose up in large numbers.   The people have the power if they will only choose to exercise it with courage.

Yes, there are millions of Americans itching to lock and load.  We hear from them almost daily.  But why?  Because government and especially the federal government, has pushed, abused, harassed, cheated, lied, cajoled and intimidated too many people for far too long and the hair on the backs of the necks of some Americans itching for a fight, is rising.  The outcome at the Bundy ranch was fully predictable to anyone with any knowledge of the true American spirit.  Let freedom ring, or we will punctuate our strongly held beliefs of liberty with guns.   Why did the government back down?  Because they were surrounded by a superior force where a fight could have ignited a much wider, but politically devastating war with the potential of the dead bodies of American men and women pasted all over our TV screens.

Out of fear of losing ones’ life or possessions, most people prefer to remain obscure, not wanting to draw attention to themselves, especially if that attention should come from agents of a tyrannical government.  Tyrannical governments torture and kill people, or put them in concentration camps for extended periods.  Some unjust governments, in order to maintain strong-arm control of the masses, will pass tens of thousands (or millions) of laws and then fine, penalize, or incarcerate individuals or groups that won’t “bend under the will of the almighty law“.   (Tell that to the illegal aliens that thumb their noses at our laws and sponge off of our generosity.)  Who but the very courageous would put themselves at that kind of risk?   Patriots do every day!

But a strange thing happens when one man (or woman) stands out amongst the rest and demonstrates exceptional bravery.  He, or she, affects some of the observers in a very positive way, in which some of those observers want to mirror that bravery.

On the battlefield, one man, risking everything, motivated by emotions of unbridled anger, or rage over something that happened to one of his buddies, will attack the enemy single handedly, from whence heroes are born.  In many cases, that single act of courage incites others to follow him, from whence wars are won.

Today, all across America, individuals who have had enough, are showing exceptional bravery.  That was demonstrated in a sudden and inspirational movement to organize tea parties in hundreds of cities throughout the country ….. an idea triggered by someone named Santelli on the floor of the Chicago Mercantile Exchange, on TV.  Santelli finally had enough of government nationalizing industries, bank and business bailouts, zillion dollar stimulus packages and other unconstitutional insanity coming out of Washington DC and the then White House and decided to “stand up”.  So one act of courage started a whole bunch of single acts of courage, from thousands of citizens all over the United States.  Courage was and is infectious.  But what has happened to the Tea Party.  You don’t hear much about them any more.  Did they give up, or run out of money?

America needs you.  If any of you are really angry about what has happened to this great land and you are perched on the brink of “standing up”, we encourage you to find the courage to do so.  Because your one act of courage will influence others to follow you and from hence our Republic will be reborn in an unquenchable and unstoppable cry for liberty.   We have given you that opportunity to make a difference HERE.  Five brave souls already have.  With just 10,000 Americans taking one peaceful, legal, successful action in defense of their country could be enough to trigger ten million Americans to follow suit.  Civil war then would never be necessary.

After 100 years of moving away from freedom, we are truly at a crossroads and the fate of our cherished America could go either way.  But “just one act of courage” by just one person, might very well make the difference between freedom and perpetual enslavement to socialism, or communism, or worse.  If you stand up, you could be the “butterfly” that “flaps its wings” in Arizona and starts an uprising in Michigan.  The seeds of freedom have already been sewn by many single acts of courage and the “butterflies” are poised to take wing.  Others, less courageous and sitting on the sidelines, are waiting for you to make the first move.  Will you?

A million authors can write a zillion articles on what ails America.  Well meaning patriots can hold thousands of conferences on freedom.  Half the people in a country can talk and debate until they are blue in the face, but it won’t change anything.  Because “NOTHING WILL CHANGE UNTIL THE PEOPLE ACT, EN MASSE!”  The other side is winning because they have captured the hearts and minds of millions of clueless, brainwashed Americans.  The question is, are you going to let them win?  We can stop the other side with action, but will we?