“When the government violates the people’s rights, insurrection is, for the people and for each portion of the people, the most sacred of the rights and the most indispensable of duties.“

Many politicians, both Democrat and Republican alike, were aghast at the rioters assaulting that most sacred of all government buildings, (according to them) the U. S. Capitol, the alleged seat of representative government.  How dare these Trump supporters attack the “People’s House.”  Apparently it’s OK for Democrats, Black Lives Matter and ANTIFA to riot, burn and loot private businesses in cities all over America because a black man felon, who served eight separate prison terms, was killed by an over-aggressive cop.  The Democrats and the media were silent and only the Republicans denounced the Democrat-Black Lives Matter incited violence of the summer and fall of 2020.  Speaker of the House Nancy Pelosi quipped, “that’s what people do.” 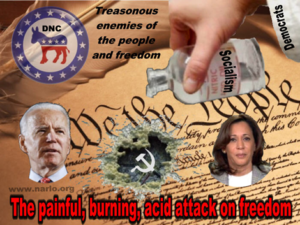 But the fury of the Congress, Republicans and Democrats, came down hard on those who dared to riot at the Capitol Building.  Why did they riot you might ask?  Because the Congress has abandoned them, Republicans and Democrats, as well as abandoning the Constitution and allowed socialism to fester, grow and prosper in America.  The protester’s 74,000,000 votes in an unconstitutional, fraud-laced election for Trump meant nothing.  In their frustration and anger, what were they to do?  They started out peaceful enough, but were probably egged on after ANTIFA and other inciters hijacked the peaceful protest.

This isn’t the last of these events.  There will be more and they will get increasingly ugly as Joe Biden and his Democrat-controlled Congress start implementing their socialist agenda, a devastating agenda we delineated in our “Challenge” to the Biden-Harris Administration.

Given what happened at the Capitol on January 6th, it is apparent that the Democrats have ignited a powder keg in America that is about to blow up in their socialist faces.  Although we hope not, the protests on January 6th could very well be a precursor to civil war, or outright revolution.

Yes, the Capitol was breached, but worse than that, in the election of 2020, the federal and state Constitutions were breached as well, which seems to be mostly ignored by most members of Congress.  In their pursuit of one-party rule, the Democrats have so badly trashed the Constitution it is hardly recognizable any more.  The U. S. Supreme Court has done little to hold the Democrats to the Constitution.  And the Republicans haven’t done much to stop the Democrats either.  Are Lisa Murkowski, Pat Tomey, Susan Collins, or Mitt Romney friends of conservatives?  Hardly!

People forget that when the Democrats held both Houses of Congress and the Presidency in 2010, they dumped a blatantly unconstitutional Obama Care on all of us, with Chief Justice John Robert’s help.  In the 10 years since Obama Care has been in effect, it has defied any attempts to repeal it.  Remember!  We have learned from Obama Care that whatever the Democrats do in the next two years cannot be undone.  Their socialist policies will be set in stone, even if they violate the Constitution, or the Republicans replace them in 2022.  The damage they will inflict on America and Americans in the next two years, including bastardizing the three branches of government, will be devastating and irreversible, unless they are stopped.

Given this inevitability, do the Democrats think that free Americans would simply roll over now that the Democrats have taken back the Congress and the Presidency again?  Do they still think that 75 to 100 million freedom-loving, heavily-armed Americans are going to sit idly by and allow the Democrats to fundamentally transform America into a socialist, globalist nation?  If they are of that mind, they are barking up the stupid tree.

Kevin McCarthy, House minority leader, came out and called for calm and then asked “why we can’t respect one another and our differing opinions.”  Differing opinions are one thing.  Dismantling the fundamentals and foundation of individual freedom by inserting globalist-socialist policies into the mix, is quite another.

We do not advocate or condone violence, or the overthrow of the United States of America.  Our goal is to return America to its original foundation of individual freedom and unalienable, God-given, natural rights under a Constitutional Republic, by peaceful means.   But as we watch and predict the path that America is on, we are well aware conservatives are bucking serious head winds.  It appears that the Democrats, (government-dependent city inhabitants) are determined to take America in a direction that will dismantle our Constitution, our individual freedom and our Constitutional Republic.  They want total government control of everything and everybody.  They want massive government handouts to buy off their government-dependent city voters to remain in power and they want the rest of us to be docile, compliant robots, (slaves) dutifully paying our exorbitant taxes and complying with crushing regulations.  The question is, will Americans bow down to this treasonous ruling class?

But let’s get back to the election of 2020.  Even if we conclude there was no election fraud in any state and neither any state or the federal constitutions were violated, the interference in the election by billionaires, social media, academia and the mainstream media on behalf of Joe Biden and the Democrats, eclipsed all foreign interference by several orders of magnitude, with no consequences to the perpetrators.  Besides the hands-off approach to Biden’s criminal son Hunter and Joe’s numerous flaws, gaffs and outright lies and the glowing accolades heaped upon Biden and Harris, Americans were barraged with the unrelenting attacks on Trump in four or more years of character assassination, attempts at the non-judicial implementation of the 25th Amendment and the groundless impeachment by other means.  No president in the history of America has been treated so viciously, all because he dared to challenge the Establishment, the bureaucratic swamp and the status quo.

Added to that was the blatant disregard and duty of the press to be fair, accurate, objective and non-biased.  On top of all this came the hostile social media suppression and censoring of anything and everything conservative.  Even if there was no election fraud, Trump didn’t stand a chance of winning re-election.  Social media, the Establishment, the Deep State and the news torpedoed Trump from the start.  In short, the deck was stacked.  Trump and his supporters have every right to feel indignant and angry, which led to the January 6th March on Washington, DC and the subsequent rioting and violence at the Capitol.

Facebook and Twitter have shut down the President of the United States permanently.  They have effectively silenced him, at least for now.  Google and Apple have dropped the conservative twitter-style platform Parler.  Is this author or you, next?  The face of Nazi fascism has raised its ugly head again, here in the United States, except it isn’t the government, it’s corporate high tech aligned with government.  What next, “Kristallnacht,” or the national demonization of all conservatives on a massive scale by Democrats, like they did to the Jews in Germany?  Could conservatives become persona non grata in their own country?

No, wanton violence is not the answer.  However, as we said in our previous article, “The hard truth is, socialist Democrats cannot be defeated without millions of conservative Americans rising up in unison, with force if necessary.  But long before force becomes necessary, conservatives have peaceful means at their disposal.  The constitution is still in force.  The law is still functional even though Democrat corruption, collusion and judicial activism are in blatant evidence.   Peaceful protests and Redress of Grievances are still protected by the First Amendment.   The trick is for all conservatives to peacefully speak with one voice in one single action at a time.” If not, the 2nd Amendment might end up being the final arbiter.

Ladies and gentlemen, you have already discovered that your conservative vote doesn’t count, either because of fraud, or majority Democrat votes.  You either fight back with concrete actions or accept the inevitable slavery and the hostile dismantling of our Constitutional Republic.  That hostile dismantling of our Republic is already well underway by the Democrats and has been for many decades.  We are being forced to relive the FDR years ….. for our own good of course.  Only this time the “emergency” is the Coronavirus pandemic, not the Great Depression.

If American conservatives want to win they’d better be smart, not violent.

Or, perhaps it is time to employ the “Encirclement.”