It appears to many of us that you don’t really know what some of the people in your administration are up to. I believe you are being ill-advised by those in your administration who have a totally different agenda.  The first lady mentioned in her interview from Africa that she did not trust everyone in the West Wing.  You said the same thing on Fox and Friends only a couple days later.

You have kept so many of your promises, and for that we’re very thankful. However, it seems as though you aren’t going to keep your promises concerning NAFTA, especially since you lost your rejection of Chapter 19. That portion of the revised NAFTA allows Canada, Mexico and the United States to challenge one another’s anti-dumping and countervailing duties in front of a panel of representatives from each country. Over the years, Canada has successfully used Chapter 19 to challenge the United States on its softwood lumber restrictions.

Mr. President, you have told us for some time that you were going to renegotiate NAFTA to our benefit or you would pull out of it completely. Now that it has been renegotiated, it certainly is not to our benefit. In fact, the new version is even worse than the original.

The New American Magazine posted an article by Christian Gomez, entitled, “NEW NAFTA: Text of U.S.-Mexico-Canada Agreement (USMCA) Sir, I am humbly asking you to read this very important article. It outlines the problems with the new agreement to replace NAFTA and Mr. Gomez definitely believes they are worse.  In fact, what I have read thus far leaves no doubt in my mind that he is right. 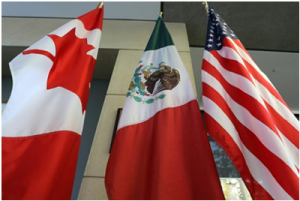 The proposed USMCA has been widely portrayed as a replacement for NAFTA, which supposedly will no longer exist. Yet an honest look at the new agreement shows that what will no longer exist is the highly unpopular NAFTA name. Not only does the USMCA retain sovereignty-diminishing provisions found in the NAFTA agreement, but it actually strengthens and expands them.

Let me present an example of one of the many absurdities I find in this proposal.

In a bold step toward a potential North American Union, The USMCA establishes a new governing international bureaucracy. Chapter 30 of the agreement establishes the creation of a Free Trade Commission as a regional governing bureaucracy overseeing various lower regional committees.

Beneath the Free Trade Commission, the USMCA authorizes all three countries to establish 16 subordinate committees and each committee will have a representative from each country; and the possibility exists that each of these committees will have someone in charge, like a chairperson. We have 16 x 3 equals 48 x 3, or maybe 4, this could mean that these 16 committees could have a staff of at least 144 and possibly 192, all of whom are unelected by the people.

Something else which surfaces out of all this conglomeration of committees and commissions and humongous amounts of staff…most likely, all these heads of the various commissions will be insiders who will be chosen by the hierarchy of the USMCA. That being the case, we can reasonably expect practically all these staff to work towards the unspoken objectives of the USMCA – the successful fruition of the NORTH AMERICAN UNION.

“The USMCA has a total of 34 chapters, 12 more than the original NAFTA, which had only 22 chapters. Unlike the 1994 NAFTA, the USMCA includes chapters on labor, environment, anticorruption, regulatory policy, competitiveness, and Mexico’s exclusive ownership of its gasoline and natural gas resources, among others.”

The last part of the above paragraph raises some very serious questions, two of which have been pointed out by Arthur Thompson, CEO of the John Birch Society…

Mr. Thompson continues by stating that the first question one has to ask is why are socialist Canada and corrupt Mexico (led by a very pro-communist president) happy to sign this deal?

Because they are playing their part in aiding the agenda for the new world order, i.e., world government to use the trade agreement strategy to incrementally and gradually combine all of North and South America into one regional entity.  They would be happy to sign, for they know that the agenda’s plan is to successfully combine all separate nations into regional entities of their areas. Then they follow up with combining all regional entities into one global entity with global authority.

This is likely the reason Mexico chose to have it spelled out that it would retain exclusive ownership of its gas and natural gas. They could avoid sharing with the U.S. or Canada if the North American Union successfully comes to fruition as planned.

Why didn’t our trade representative, Mr. Lighthizer, get the same agreement for America? He simply could have had it entered into the text of the agreement affording America the exclusive ownership of all its mineral properties.

If Mr. Lighthizer is on our side and protecting our interests, surely that is something he would arrange for our benefit and protection, but he did not. This raises the question – is he on our side? No! Absolutely not. I say this because of where he comes from, who he is connected with, and their objectives.

What Lighthizer and others are up to is the destruction of the sovereignty of all nations and the amalgamation of all of them into one entity of global governance, i.e., the new world order, or one world government – Novus Ordo Seclorum (A new order of the ages).

Mr. Lighthizer is a member of the globalist Council on Foreign Relations (CFR) and as such he would conduct his activities to bring to fruition the goals and objectives of the CFR.

Mr. President, despite your great intelligence and ability to accomplish much of what others have tried and failed, it appears that you are unaware of the purposes, goals and objectives of the CFR.

The CFR came into existence in 1921. It was headed by John Foster Dulles who later became the U. S. Secretary of State.  The specific purpose of the organization is to change the United States so that it can be comfortably merged with the Soviet Union.

Curtis Dall, in his book, “FDR, My Exploited Father-in-law,” said in reference to the CFR, and I paraphrase, “I was there in 1939 when these men with their attaché cases descended upon Washington; I could have had my place at that table (here he gives the address of the Pratt House which was headquarters of the CFR) but first I had to consider loyalty to my country and therefore I had to decline.”

There were prior actions by the forces which brought about the birth of the CFR. Around 1917, during the Russian Revolution, Alexandria Kerensky successfully deposed the Tsar and was in the process of setting up and putting into action a reform movement, when the powers behind the scenes in America smuggled Lenin and a large quantity of gold into Russia which was used to take control of the revolution and place it in the hands of the Bolsheviks.

This is how Russia became a part of the agenda for world government. The reason for it is very simple.  In order to move America away from its position at that time, which I will call the Thesis, to a diametrical one, there was a need for a nation that represented the diametrical position, or the Antithesis, which would be the arch enemy of America. Through manipulation of our foreign policy by members of the CFR for over a century, and through the application of dialectical strategies, the United States is almost at the point where it could be comfortably merged with the Soviet Union, and thus with the remainder of the world.  This is the resulting synthesis they are working toward.

Mr. President, the one thing we have to keep in mind is that we can recover from a lack of jobs and a bad economy – as the recent surge in our economy after your election proves. But what we cannot recover from is the loss of our sovereignty!

You really had the globalists worried in your recent speech before the United Nations, and especially when you declared that,” We will never surrender America’s sovereignty to an unelected, unaccountable, global bureaucracy. America is governed by Americans. We reject the ideology of globalism, and we embrace the doctrine of patriotism.”

What a wonderful statement, and it did my heart good to know that we had a President who would make such a declaration. But then either knowingly or otherwise you erased everything you said prior to that; when you stated, “The United States is committed to making the United Nations more effective.”

No, Mr. President, a “more effective” United Nations would be better able to undermine the sovereignty of our nation and all nations which is their goal. They were brought into existence specifically for this reason. Their main target is America for the national sovereignty of all other nations cannot be undermined as long as America remains sovereign. It gives me great pain Sir, to have to tell you that you have contradicted yourself by first telling the UN and the world that America intends to remain a sovereign entity and then claiming a ‘more effective’ UN is your goal. That amounts to a gigantic turn-around. The UN is the world’s greatest enemy of national sovereignty and a more effective UN would jeopardize the very sovereignty you have so greatly defended.

This so-called great trade deal, the USMCA, is part of and plays into the goals of the UN. And I’ll just be straight-up with you sir, there are no words to resort to, which completely conveys the depth of my contempt, scorn, revulsion, and loathing for those who promote, support and go along with this so-called “free trade” deal, or any other which threatens our national sovereignty.

Your advisors have, no doubt, set you up, Mr. President.  I expected as much when I learned something of the back-trail of Mr. Lighthizer.  Undoubtedly others are involved. One or more of your advisors recommended him to you, and surely some of them knew him and what he supported.

The ball is in your court Sir, if you let this deal come before Congress and the Senate it will in all probability be ratified which will begin the globalists’ process to bring to fruition the North American Union.  Another result will unfortunately be the failure of your reelection in 2020.

Don’t allow the globalists to make you out as one of their pawns in betraying America.  To hell with them…step up to the plate and do what is in your character to do.