Democrats in Oregon have reached their boiling point as a result of Republican groups and conservative speakers and lecturers seeking help in many instances when they are harassed or assailed by left-wing organizations that are funded by the Deep State rich.

Some of those who have volunteered to protect conservative protesters possess impressive backgrounds in law enforcement, government security and military special forces training and experience.

Rather than waiting for news media reports or government agencies’ press statements, private intelligence firms have garnered the names of domestic terrorist groups and radicals due to the seeming secretiveness of the Obama administration. 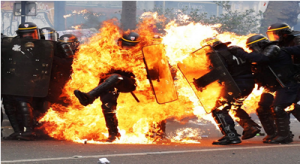 While the members of private militias will be extremely helpful in cases of security and protection when militia members are treated like the true patriotic American warriors they believe they are.

“With radical political groups such as Black Lives Matter and Antifa repeatedly displaying that they are legitimate terror groups of anti-Americana, there is absolutely no reason why we can not stand against them and protect our country and their God-given rights we have as Americans,” said retired military intelligence and police sergeant Steven Douglas Laffler.

Meanwhile a top Oregon Republican Party member announced on Monday that he is leaning towards using well-trained and well-led militia groups for security purposes. The idea came about after a man directing anti-Muslim rhetoric at two women fatally stabbed two men and injured a third this weekend.

Multnomah County Republican Party Chairman James Buchal told a British newspaper, The Guardian, that recent incidents have caused the Portland GOP  to weigh security alternatives. “I am sort of evolving to the point where I think that it is appropriate for Republicans to continue to go out there,” Buchal told The Guardian. “And if they need to have a security force protecting them, that’s an appropriate thing too.”

He said that might mean making arrangements that don’t rely on police. There are a number of police chiefs and county sheriffs in Oregon, as well as throughout the nation, who are suspicious of private security firms, militias and political protection security guards.

“…. There are these people arising, like the Oath Keepers and the Three Percenters,” he added. “We’re thinking about that. Because there are now belligerent, unstable people who are convinced that Republicans are like Nazis. Buchal told the Guardian he did not want to become involved with extremists.

The Guardian said The Three Percenters are described by Political Research Associates as “a paramilitary group that pledges armed resistance against attempts to restrict private gun ownership.

According to the leadership at the Three Percenters — which is the percentage of Americans who serve in the military, law enforcement and in security/intelligence —

“The Three Percenters is a national organization made up of patriotic citizens who love their country, their freedoms, and their liberty. We are committed to standing against and exposing corruption and injustice.

” We do not seek to incite a revolution. However, we will defend ourselves when necessary. We are not here to create violence. Violence should always be a last resort and even then should only be defensive in nature.

“We are NOT a militia. However, we do have meetings on local levels. These meetings are to help members network together and to learn from each other. Being a Three Percenter is more of a way of life rather than a club to join. As such, there are no membership fees or dues and we will not charge people to participate in a movement that defends civil liberties. However, some events may be held at facilities that require admission. This can be paid individually, as a group, or through a legal means of fundraising.

“Operational costs (Website hosting, forum, domains, store, etc) are paid for privately by the National Leader with aid from proceeds from the online store. Mostly, we are an “open source community” meaning, we help each other and try not to rely on third parties or institutions that cost money for our operations. We consist exclusively of volunteers and no member at any level is on any payroll provided by our organization.

“We are NOT anti-government. In fact, we are very pro-government, so long as the government abides by the Constitution, doesn’t overstep its bounds, and remains “for the people and by the people”. Our goal is to utilize the fail safes put in place by our founders to rein in an overreaching government and push back against tyranny. We are working to preserve the intent of our government as designed. We do not intend to implement our own government. There is often a misconception that we are wanting to overthrow the government. This is simply not true and a false rumor to try and paint our movement as anti-government.”

Although similar to The Three Percenters, The Oath Keepers have been dubbed by the fake civil-rights organization Southern Poverty Law Center (SPLC) as “one of the largest radical antigovernment groups in the U.S.”

Mayor Ted Wheeler said he’s worried that attendees of a proposed pro-Trump rally and other similar events could “peddle a message of hatred.”

“The Portland police took an oath but they’re only allegiance is to Mayer Ted Wheeler and the Democratic Party and not the patriots that have always stood by them and tried to protect the police. We are still pro law-enforcement but we have no respect for the ones that stand there and take orders from a very dangerous man because they have no brain of their own.” – Conservative Guardians

“It is more than apparent to many of us the police and other authority figures have their hands tied in most cases of protest clashes and politicians are seeing it as well. Patriots are not bound by the same rules and if called upon as militia to act as security we are more free to actually protect and secure. That is a sad fact in this day and age but a fact nonetheless,” said Loren Kelly, a police intelligence officer from New York.