Where is the public outcry from the Oregon Republican State legislators?

Another story regarding the criminal actions of an illegal residing in the sanctuary state of Oregon has come to light and the details of this man’s actions are horrifying.

An illegal alien from Mexico entered a guilty plea to multiple charges of kidnapping, sodomy and sexual assault on Friday. Sergio Jose Martinez, 34, a Mexican national who in the past was deported from the United States at least 20 times has been convicted of 10 counts of sexual assault in Oregon.

Police said Martinez was armed with a knife and assaulted a woman in the basement parking garage of a building on the 2100 block of Northeast Halsey Street at around 7 p.m. Monday.

Martinez ran away when uniformed police officers arrived. They chased the suspect on foot through the neighborhood before he was finally nabbed after broke into a another apartment.

Police reports and court documents allege that Martinez entered the woman’s home through an open window, used scarves and socks to blindfold her, gag her and tie her up before he sexually assaulted her and beat her with punches and the slamming of her head against wood floor.

In his subsequent sexual assault and attack, the police probable cause affidavit accuses the suspect Martinez was hidden in a dark corner of the parking garage and he first approached a woman telling her he wished to talk. 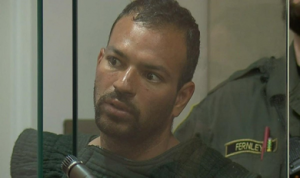 The woman in fear of the suspect offered Martinez her money, her cellphone and her personal laptop computer, but Martinez, she said, threatened to kill her and forced her to get into her car while pointing a six-inch knife at her, according to court documents.

The probable cause affidavit states the woman kicked Martinez in the midsection, but he said, “you shouldn’t have done that,” and again threatened to kill her.

The woman had pressed the panic button on her car alarm system before she got into the suspect’s vehicle. Court documents noted she escaped from the car, but Martinez tackled her and slammed her head onto the ground.

People nearby heard screams and rushed in to help, causing Martinez to run away. When he was caught by police, he was carrying the 6-inch knife and the items he stole from both victims, according to the probable cause affidavit. 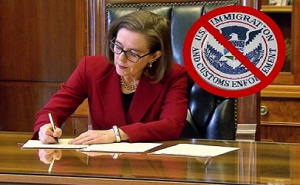 Oregon’s Governor Kate Brown had officially declared Oregon to be a Sanctuary State for all illegal aliens in February 2017.  Her executive order forbids all state agencies and employees from helping federal immigration officials locate or apprehend illegal immigrants.

Oregon State Law already forbids state and local law enforcement agencies from using public resources to find or arrest those whose only crime is being in the country without proper documentation, Brown’s order goes a step further in solidifying the state’s sanctuary status by expanding the law to all agencies.

Oregon is among the growing number of Democratic Party run states that provide ‘sanctuary’ to illegal aliens. Such state laws equate to not cooperating with federal immigration law enforcement agencies who require state and local law enforcement and sheriffs’ departments to to turn over illegal aliens with criminal backgrounds, especially immigrants who commit violent crimes.

Instead these ‘sanctuary’ cities and or entire states choose to harbor these criminals, putting them before the safety and well-being of American citizens residing in these areas. Oregon voters are urged to vote for the liberal republican Knute Buehler in hopes he will repeal this insane criminal protecting law.

The investigation of sex crimes case is extremely difficult and demanding, requiring not only technical expertise and experience, but also sensitivity towards the victim. The detective or prosecutor assigned to investigate should always remain cognizant of the fact that the entire criminal justice process, beginning with the initial police interview right through adjudication, poses an additional ordeal for the sex crime victim and her family and loved ones.

The trauma of sexual attack leaves the victim at once hurt — physically and emotionally — angry, anxious, fearful, vengeful, confused, hate-filled and distrustful. In many cases, the victim blames herself for the act, thinking she contributed to the crime. If she was returning home late from a party, she may tell herself she deserved what she got because of her carelessness late at night or early in the morning. The investigating officer(s) must reassure her that she did nothing wrong. The rapist or sex offender is the one who committed the crime.and the one deserving punishment to the fullest extent of the law.

In some cases, the investigators will find the victim to be uncooperative, even hostile the preliminary stages of the interview/preliminary report. Sensitivity and understanding of the psychology of rape and sexual assault are prerequisites to a successful sex crimes investigation.

Most big-city police departments have specialized units for sex crimes as do most prosecution offices. In New York City, for example, there are several sex crimes squads or units operating within all of NYC’s five boroughs. In addition to the NYPD’s specialized squads, the District Attorney’s Office in each borough have assistant district attorneys assigned to a special sex crimes unit.