Home/Opinions, September 2017/Our President And First Lady Make Us Proud To Be Americans

Our President And First Lady Make Us Proud To Be Americans

A kind gesture can reach a wound that only compassion can heal.  —Steve Maraboli

Kindness is the language which the deaf can hear and the blind can see.  —Mark Twain 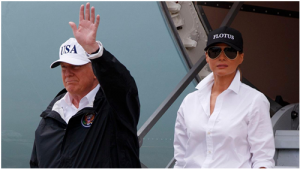 The Trumps in Texas

Our President and first lady are those kinds of people.  In their visits to Texas and Louisiana to help people who lost so much, they brought cheer, hope and joy. Watch the smiling faces of the Texans who got to meet the President and our beautiful first lady.  Many of those faces were black Americans who love our President.

What is shown in this video is the reason the globalist establishment hates him.  They know he is the real deal, and they are the fakes in grave danger of losing their power because layer by layer he alone is removing the chains of slavery they have put in place to be used for legal tyranny.

The President is doing what he can. The GOP, however, is actively trying to stop him, and we know why, because most of them are aligned with the same agenda as the left, the destruction of America’s freedoms, her rule of law, and her Constitution, of the people, by the people, and for the people.

The President’s Day of Prayers

On September 1st, President Trump signed a proclamation declaring Sunday, the 3rd of September, a “National Day of Prayer” for the state of Texas in the wake of Hurricane Harvey.

One of my email friends wrote, “Today in Church our pastor specifically mentioned that we included prayers for ‘The Day of Prayers’ as requested.   I wouldn’t call it a mass movement, but I see more signs that more people are praying for our nation than has happened in a long time.”

We should be praying daily for our country, and for our President and his family for guidance, wisdom and protection. 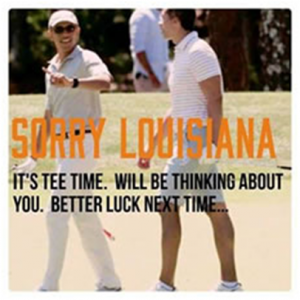 The ugliest thing I have ever seen is a human being without compassion.  We saw Obama playing golf while Louisiana flooded in August of 2016.  Eleven people died and 40,000 homes were damaged by floods in Louisiana. Obama did speak with FEMA Administrator Craig Fugate from his vacation spot in Martha’s Vineyard, Massachusetts.  The former president was briefed on the resources and support and then went back to playing golf, he never changed his travel plans.

So, Obama played golf, Hillary slept, and Donald Trump went to Louisiana with a semi load of needed supplies.  Had Obama or Hillary sent supplies for the people, the photo-op by the leftist media would have been spectacular, but not with Trump. Everything he did was done silently, with the help of Franklin Graham’s Samaritan’s Purse. “And let us not be weary in well doing: for in due season we shall reap, if we faint not.” Galatians 6:9. 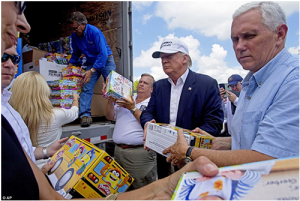 This is the fabulous man we voted for…a man with a heart for America’s people, and with an open pocket book.  Can you imagine just for a moment what the secret service thinks when our President eagerly mingles with the people, shaking hands, taking pictures, hugging everyone, passing out meals, giving them needed supplies.  I know they are worried sick, but I also know that God has His Hands on this man, President Donald J. Trump.

The President and first lady boarded Air Force One for Texas and immediately Melania Trump was attacked from the leftist media and crazy whack job Lynn Yeager, contributing fashion editor from 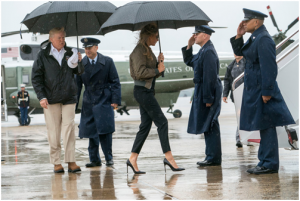 Vogue.  Why?  Because FLOTUS was wearing her standard beautiful stilettos.  This is her normal dress, and there’s nothing wrong with it.

Note that when FLOTUS arrived in Texas to help with Harvey survivors, she was wearing tennis shoes.  To think these media idiots have nothing better to do but attack our beautiful first lady for her 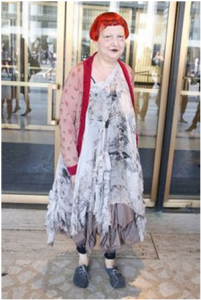 dress, especially when she is such a class act at all times.  And I loved her FLOTUS hat!

There’s certainly a big difference between our present first lady, who is always dressed appropriately and always knows proper protocol, compared to our former first lady who occasionally made our eyes bleed with what she put on her body.

I cannot remember anything that Michelle Obama ever wore that resembled attire I would want to emulate.  Here are some examples.  Yet, the media never said a negative word about what adorned this woman’s body, or whether she was dressed appropriately as First Lady of the United States of America.

There are many liberal designers who are refusing to dress Melania Trump, and it is their loss.  She has her own revenge.  Link 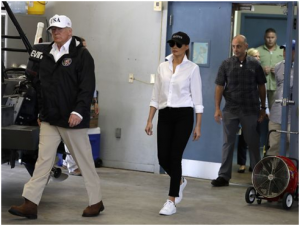 Stylist Phillip Bloch said, “Fashion people are fickle and fake. They are starting to see she is a beautiful woman who is married to the president, and it is an honor to dress her.”

Not since Jacqueline Kennedy has there been a first lady who needs less help.

“She doesn’t need couture. She can buy off the rack, and it looks beautiful,” Bloch said. “She knows her size, and she knows what works on her. She luxuriates in minimal.”

And she always looks absolutely gorgeous.  And we’re proud to have her as our first lady, a beautiful, intelligent, kind and giving woman, next to the man who is working to save our beloved country. 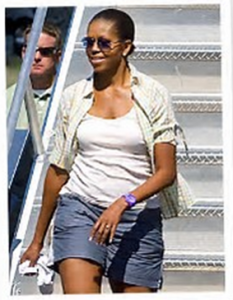 Donald Trump and I are the same age, we grew up in the country during her very best times, other than Viet Nam, and we know what it’s like to love our country and love her people. Our President wants to Make America Great Again…great like the country we grew up in and loved.

I’ll leave you with these wonderful quotes that describe our President.

“One who is kind is sympathetic and gentle with others. He is considerate of others’ feelings and courteous in his behavior. He has a helpful nature. Kindness pardons others’ weaknesses and faults. Kindness is extended to all — to the aged and the young, to animals, to those low of station as well as the high.”  Ezra Taft Benson

“There is overwhelming evidence that the higher the level of self-esteem, the more likely one will be to treat others with respect, kindness, and generosity.”  Nathaniel Branden

And to that, I say a big AMEN!

P.S. Again I come to all the avid readers of NewsWithViews and ask you for support.  Running a website this large is a huge operation and a huge monetary cost.  Please help us to keep bringing the truth into your home every morning.  Won’t you add NWVs to your monthly donations, every little bit helps this website stay alive.  You can donate here.