Overwhelmed By A Clear And Present Danger

Last week in our article entitled, “Done In By Our Own Irrational Compassion“, we covered some of the generalities of illegal immigration.  We received a response to the article from a Floridian that tells the story in stark human terms.  This gentleman wrote:

“As a native of a large Florida city I have lived thru wave after wave of economic migrants, drug smugglers, malcontents and evacuees.  First the Cubans, then Jamaicans, Puerto Ricans, Hondurans, Nicaraguans and loads of Mexicans came. This city is now only about 4% White Americans.  The Jews dominate some neighborhoods.  I guess they are considered white so when you take them out of the average there are less than 1% whites left.  Even the once thriving colored community has mostly moved north.  The Cubans cling to political offices and dominate local government jobs.  There is incredible corruption.”

“I moved to another county 25 years ago.  We have been overrun and now are 45% white remaining.  The newcomers are not Americans and behave like where they came from. 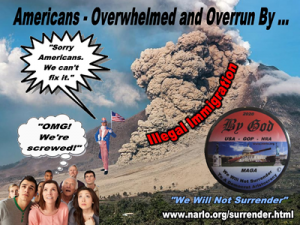 My local Home Depot only broadcasts announcements in Spanish.  The Venezuelans have taken over the community just North of me.  Like the Cubans, they have no intention of assimilation.  They hook up to every government handout they can get and there are agencies that help them.  My property taxes have increased disproportionately and I cannot afford retirement in my current home.  Our local sales tax was just raised 1% to give them more.”

“In Florida we have Democrat/communists in all elected positions.  I am planning on moving to North Florida soon. As a kid, this place was a paradise.  Now it is hell.  If I were to send you a 30-minute local news cycle, you would simply think it was just another third-world country.  The carnage, crime and absolute chaos of life living around them.”

“When the dollar collapses and the treasury goes dry, the major communist areas will self correct.  I think 50% will be dead in the first week.  As life becomes impossible for them I hope they will self deport.”

To add to this Floridian’s nightmare, Senator Marco Rubio just tweeted out:  “Unlawful arrivals are overwhelming our system.  I have just been informed by the Palm Beach Sheriff that starting next week Border Patrol will begin transporting 1,000 migrants a month from the Southern border to Broward & Palm Beach Counties and releasing them, pending an asylum hearing.”  (Releasing them to whom?)

1,000 illegal immigrants add up to 12,000 illegal immigrants in a year, in just one small area of Florida.  Cities and towns in New Mexico, Texas, Arizona and California, and all around America, are being flooded with illegal aliens by the tens of thousands.  The illegal aliens have no money, so who supports them?  You do!  You pay for their food, their rent, their education, their health care and more.  It is estimated that each illegal alien will cost the American taxpayer $82,000 over the alien’s lifetime. (Source: Fox News)  Do the math!  Whether it is 10,000,000 illegals or 30,000,000, the cost is staggering.  At $30 million illegals, the cost is $2.46 Trillion.

California is a prime example of illegal immigration going off the rails.  The poverty rate is higher than the national average.  The taxes to support illegal aliens has gone far beyond taxation without representation.  Homelessness is rising at an accelerated rated and their cities are unconscionably filthy.  God knows why responsible Californians put up with it.

“None of the funds provided by this Act or any other Act, or provided from any accounts in the Treasury of the United States derived by the collection of fees available to the components funded by this Act, may be used by the Secretary of Homeland Security to place in detention, remove, refer for a decision whether to initiate removal proceedings, or initiate removal proceedings against a sponsor, potential sponsor, or member of a household of a sponsor or potential sponsor of an unaccompanied alien child (as defined in section 462(g) of the Homeland Security Act of 2002”

Once they are here, the illegal-alien new arrivals and the relatives they are living with, are shielded from deportation.  We certainly don’t want to deport any future voters for the Democrat Party, now do we?

Every time there is a reasonable proposal to “fix” the illegal immigration crisis, the Democrats throw in a ringer, complicating the problem even more and making it impossible to fix.

With over a million illegal aliens crashing our borders every year and released into the general population by the flawed “catch and release” policy, and the 20 to 30 million illegal aliens already living in America in the shadows, (no one believes the 11 million figure any more) the impact on the economy and the culture has been and is, not only unsustainable but economically draining.  Even worse, that government would allow it to happen is criminally negligent.

The “Merit” proposal for legal immigration, just recently put forth by President Trump, is a start but doesn’t address the worst magnet of all ….. the misinterpretation of the 14th Amendment that allows any baby born in America to become an American citizen.

The sides are so far a part there is no hope, either in the short or long term, of the government ever passing “common sense” immigration reform legislation.  If the government won’t fix it, which is their duty to do so, then whose job is it?  If the people won’t step up to the plate, then do we just let the problem persist in perpetuity until we, as a nation and as a people, are totally OVERWHELMED, CULTURALLY DILUTED ….. and broke?

Rational, non-politician Democrats, can’t be any happier with an out-of-control immigration crisis than are rational Republicans.  But then who knows, rational may be a contradiction of terms.  Are there any rational human beings any more, or just ideological ones?  In contrast, are there any courageous living patriots today that will pick up the “sword” when they are threatened?  Is there any American that cannot “see” that we are being OVERWHELMED BY A CLEAR AND PRESENT DANGER TO OUR SAFETY, OUR SOVEREIGNTY AND OUR SECURITY?

Why is it that the American people, en masse, gloss over or ignore the fact that every single foreign national that gains illegal entry into the United States, is breaking the law and committing a criminal act?  In a country of laws, if one segment of society can break the law and then get rewarded for it, but all the rest have to obey the law, then a “nation of laws” is meaningless and will collapse in the long run. If a “nation of laws” is meaningless, corruption and chaos reign.

In our last article we wrote:  “Just how bad do you want to stop illegal immigration?  You moan, groan and complain about it but do nothing.  The hard truth is, it is abundantly obvious that your government won’t stop it.  Even so, all is not hopeless.  Enough legal and united Americans from either party can stop it, if they are of a mind.”

The Founding Fathers gave us the legal tools to solve a problem, if government refuses, or is unwilling to solve it.  One legal tool is the “Citizen, Common Law Grand Jury.” (CCLGJ)  The CCLGJ has been upheld by the U. S. Supreme Court.   “In a stunning 6 to 3 decision on May 4, 1992, Justice Antonin Scalia, writing for the majority, confirmed that the American grand jury is neither part of the judicial, executive, nor legislative branches of government, but instead belongs to the people.  It is in effect a fourth branch of government “governed” and administered to, directly by and on behalf of the American people, and its authority emanates from the Bill of Rights.”

The CCLGJ “Fourth Branch of Government” (BY THE PEOPLE) is just one of the solutions to taking back our government and our country, person by person, city by city, county by county, state by state ….. and returning the federal government to its constitutional limits!  (The only other solution is for the American people, en masse, to turn against all illegal aliens, push them out of the shadows and force them to self-deport.)

We discuss that “by-the-people“ solution on our new web page in our never-ending effort to reclaim our sovereign, individual rights and put a stop to illegal immigration using the CCLGJ and do the job that government seems powerless to do.  Which of you will step up to the plate and actually do something for your country?  We are!