While Bill Gates trumpeted his so-called “Decade of Vaccines” in 2010—apparently given a new lease on life with Covid—he’s been understandably quieter about his planned Decade of Pandemics. Of course the two go hand in hand, or perhaps hand in glove, as both are merely tools to further the Davos elites’ two-pronged attack on We the People: genocide and subsequent enslavement of those who survive.

Plandemics and their subsequent mRNA vaccines can maim and kill millions of people, while providing the psychopathic elites with plausible deniability. Here’s Gates’ disingenuous warning: “Also, related to pandemics is something people don’t like to talk about much, which is bioterrorism, that somebody who wants to cause damage could engineer a virus. “ [Italics mine.] Hmmm…now why would anyone want to do that, Bill?

In case you were wondering, Stephen Luby, professor of medicine and senior fellow at Stanford’s Wood Institute for the Environment, informs us that: There will be a Sars-CoV-3.

Not one to be outdone by pundits across the Pond,  Sustainable Prince Charles offers this gem: There will be more and more pandemics, if we don’t do ‘the great reset’ now.

It seems the WHO is planning for ten solid years of pandemics, from 2020 to 2030. How does WHO know what, why and when? Unless, of course, Gates’ minions—the WHO included—are feverishly planning and executing these pandemics. What better way to accurately predict the future than by controlling it?

Among the dwindling numbers of literary classics students are assigned today, one often finds Mary Shelley’s novel Frankenstein. Written when Shelley was only eighteen, it is quite an achievement and brilliant in concept; although, in my view, far from a literary masterpiece and actually a bit of a slog to read. Nevertheless, students love it.

Unfortunately, they miss the point.

Instead of grasping what I consider to be the genius of the novel—its exposition of the truism that when man plays God, disaster inevitably follows—the kids derive the message that you should be kind to monsters. Many of them write essays to the effect that if only people had not rejected the poor monster—if only they had not hurt his feelings—he wouldn’t have gone on a killing rampage, which many students think was justifiable. I kid you not. This is how your children are being trained to think in public schools.

Perhaps their teachers also fail to point out the moral of this story. In fact, if it was clearly recognized and taught as a cautionary tale about hubris in schools today, I’d wager that the Common Core progressives who put together today’s pathetically weakened and subversive curriculum, would quickly remove it from the syllabi. After all, from man made viruses to gene-altering “vaccines” to transhumanism, we’re being besieged by legions of unleashed Dr. Frankensteins.

Of special note among the legions of domestic Frankensteins must be our own Dr. FauxChi, whom one might describe as a modern-day amalgamation of Josef Mengele, the Nazi’s mad scientist who conducted cruel experiments on prisoners, and Joseph Goebbels, the Nazi’s Minister of Propaganda.

The Fauch’s organization NIAID has given millions of dollars to crazed scientists to bioengineer new and deadly GMO viruses and retroviruses that previously apparently did no harm in bats or other creatures, and couldn’t infect humans, but now can cause worldwide pandemics.

This begs the question: Why perform “Gain of Function” research at all, since the function you gain creates a bioweapon?

Here’s the logic: in case those viruses were ever to naturally jump from bats to people, say in a Wuhan wet market, and make people sick, scientists would be able to recognize the pathogens and presumably make vaccines against them for the huge benefit of… patent holders, like Fauci’s NIAID, and Big Pharma.  And if thousands or millions were to die in the process? That’s just collateral damage.

Of course there’s an even more nefarious possibility—dare I say likelihood: that these Frankensteinian viruses and the genetically modified “vaccines” we’re told we must have to combat them, are both designed for genocidal “depopulation” purposes. Pick your poison.

Recently, Senator Rand Paul bravely stood up to Fauci, perhaps to make amends for having stabbed President Trump in the back along with the majority of his feckless fellow Senators on January 6th—but I digress.

Kudos to Rand for pointing out Dr. Fraudster’s lies and collusion with the Wuhan Institute of Virology to fund the dangerous, illegal and immoral viral-lethality-enhancing “research” that led to Sars-CoV-2 and Covid-19.

But Rand’s main concern, like that of so many others, is that these viruses could escape the lab and infect people. Well, accidents do happen.

Except, as FDR told us, in politics, where “…nothing happens by accident. If it happens, you can bet it was planned that way.” And for those who refuse to believe Covid-19 was planned—in spite of Event 201 describing the precise scenario of the pandemic and worldwide lockdowns several months prior to the Wuhan outbreak, as well as the perfect timing of the “pandemic” to pull the plug on Trump’s economic miracle and pave the way for flagrant voter fraud through unprecedented national mail-in voting to keep, um, Biden voters “safe”—all I can say is I’m running out of bridges to sell. 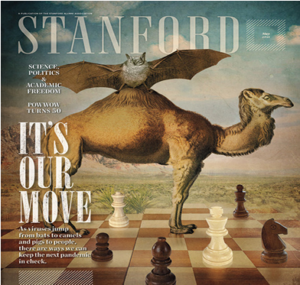 Back to the bats.

Here’s the May 2021 cover of Stanford’s Alumni Magazine, illustrations by Catrin Welz-Stein:

The accompanying ghoulish article: Of Viruses & Vectors, by Deni Ellis Béchard, almost reads like a primer on Agenda 21/2030, full of warnings about global warming, climate change and the dangerous “edges where humans and animals come into contact” leading to “human-wild interface with less and less buffer between them.”  Who knows what dire diseases may emerge “…at the edge of human habitats.” Did you realize you live in a “human habitat” instead of a city or suburb or small town?

The passage quoted above obliquely refers to the Davos elites’ Wildlands Project, as they plan to make the “wildlands” as off-limits to us as our Capitol was for months after January 6th, while herding us into crowded high-density “districts” à la The Hunger Games.

In his article, Béchard  kills two bats with one stone: implying we should stay out of forests, etc., and presumably stop raising livestock (animals are “reservoirs” for “vectors” like mosquitos that spread viruses) though people have done this safely for millennia.  So what has changed? The addition of the elite cabal’s phony global warming/climate change psyop, along with their control of the media for propagandizing their mischief.

Referencing climate change and other spurious globalist claims, Béchard blithely assures us we’re in for more pandemics, sooner rather than later, and the next one could stem from the NIPAH virus, with a fatality rate of 75%. Yes, you heard that correctly. Seventy-five percent fatality rate. Compare that to Covid’s measly .1% for all but the frail elderly and those with serious co-morbidities who have a rate from about .2% to 2% or so. 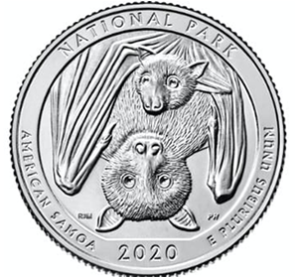 What is this fascination with bats?  The 2011 predictive-programming movie Contagion—and here’s your spoiler alert—featured a pandemic almost exactly like the one we’ve just endured, which was discovered to have originated from…you guessed it…a bat!

Here’s another unpleasant surprise for you: Look at the American quarter that came out in 2020, a year which should be rechristened by the Chinese as the Year of the Bat:

Perhaps the Globalist Cabal—billionaire Gates and Davos pals who can’t wait to depopulate, I mean vaccinate, the world—with their penchant for the occult and demonic, also had in mind the Mayan’s bat god, Camazotz, associated with death and sacrifice, as in the sacrifice of human beings.  Pretty remarkable that a spooky-looking pair of bats was the best that American Samoa could come up with in the way of an uplifting emblem.

Here’s another creepy picture of our dystopian virus-laden future by Catrin Welz-Stein from the same article Of Viruses & Vectors. 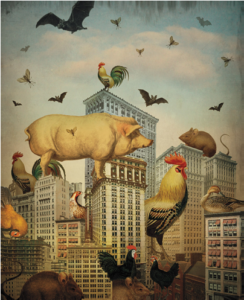 But it looks as if the monkey may have beaten out the bat, as the WHO is reportedly convening an “emergency” meeting on the Monkeypox which it claims is going global. Hmmm… I don’t recall ever hearing about monkeypox, which sounds as if it affects only, well…monkeys. Does that mean the WHO seeks to make monkeys out of us? If so, it won’t be the first time.

After the manner of Hollywood producers who often follow up a mediocre film with a sequel that’s even worse, it seems the Powers-That-Be are following the same template they used for Covid: First they claim to find a few scattered cases of some exotic or “novel” virus but reassure us that we have no cause for alarm…as yet. This way they can slowly build up a crescendo of fear, then suddenly crank it up to full-blown panic with projections of millions of deaths—ultimately terrifying people into getting a brand spankin’ new mRNA Chimp-22 vaccine that will magically be rushed to market to keep us, you know, “safe.”

GAIN OF FUNCTION = LOSS OF BENIGNITY

Once laboratory scientists re-engineer a virus that has never infected people and/or is benign to humans, in order to make it malignant, they’ve engaged in bioterrorism research and development. There’s no polite way to say this—it’s evil.

On the one hand, as Mary Shelley showed us more than a hundred years ago, messing with nature to create new life forms is bound to be catastrophic.  On the other, since Dr. Faustus himself has both funded this kind of “research,” lied about having done so, and presumably gotten his co-conspirators at the Wuhan Institute of Virology to cover for him, we can take this as clear indication that FauxChi knew what he was doing was wrong. And like his fictional predecessor, Dr. Frankenstein, little Tony Fauci will surely pay the price for the hellishness he’s unleashed on the world.

But unfortunately, he’s not alone. Not only have a number of “scientists” been working on Gain-of-MalFunction “research,” some of these geniuses have been laboring to create bizarre new life-forms that have even more in common with Mary Shelley’s infamous doctor and his monstrous creation. In fact, transhumanists are busily remaking man in their own benighted image, as the globalist cabal’s plan is not only to do away with our liberty, economy and quality of life, but also with humanity as we know it. For these hubristic New World Order designers, We the Peons are already being described as “legacy humans.”  This is analogous to the heirloom tomatoes you may find at your local farmers’ market—the rare varieties from the good ol’ days.

The new human species they plan to create will be merged with AI and/or some form of technological machinery—that is, those who are slated to be the “smart ones,” a la Huxley’s Brave New World. The Epsilons—those at the bottom rung of the societal ladder—will be merged with animals as “chimeras.” Alex Jones was evidently right—these experiments have been going on for many years.

And now there’s a team of researchers at Tufts that supposedly successfully created… the first-ever, self-replicating living robots.

Perhaps it was inevitable that as man discovered more and more about the wonders of our universe and of our own bodies, some would trod this path. It seems there’s nothing new under the sun after all.  The Serpent’s promise to Eve in the Garden was if she’d eat the forbidden fruit, she—and her mate—would become “as gods.”

Perhaps the psychopathic Powers-That-Be and their malevolent university-trained cohorts have forgotten the upshot of a devil’s bargain. At the very least, they ought to reread Frankenstein. Either that or the Bible.

About the Author: Cherie Zaslawsky