Home/April 2020, Opinions/Pandemics and Population: Correlation To Further Disasters For America

Pandemics and Population: Correlation To Further Disasters For America

One of the issues that escapes most Americans, certainly our U.S. Congress, and even President Trump: our exploding population density.  Our ever-closer proximity, our ever-growing density and our overcrowded cities create havoc for the Natural World.  Unfortunately, few leaders connect the dots, either here or worldwide.

I spoke with one of America’s foremost environmentalists, Leon Kolankiewicz, on why our leaders along with the main stream media refuse to put 2 and 2 together to arrive at the obvious answer, which is four!  I’ve known him and read his work for 20 years. He’s irrefutably one of the finest specialists in America today who keeps ringing the bell on human overpopulation’s consequences. As a world traveler, he’s seen what I have seen in my own travels.  Hopefully, his voice reaches the major networks where he might expound on what we face as a civilization.

Mr. Kolankiewicz, give us an idea of what we face and why we face it:

“The current pandemic is perhaps the inevitable outcome of an unprepared, globalized, borderless, overpopulated world,” he said. “And the importance of borders is clear: In addition to all the obvious medical measures, more than ever the world needs borders, population stabilization, and more ethical approaches to our non-human neighbors on this ever smaller planet.”

“It seems like just yesterday that I was warning about the threat of viral pandemics on our overpopulated, interconnected planet.

“In fact the year was 2014, at the time of the last horrific outbreak of the deadly Ebola virus in Africa, which went on to kill thousands. The first ever case of this lethal disease had just been diagnosed in the United States.

“Back then, I wrote words that could almost have been penned again just yesterday:

“It was perhaps inevitable that this terrifying scourge should arrive on our own shores, given its exponential growth in West Africa, its long incubation period, the ease of international air travel, and the sheer number of both returning Americans and foreigners (tens of millions of travelers and migrants annually) entering the United States from abroad.

“Even earlier than that, back in 2009, I warned in a radio interview during the Swine Flu epidemic that:

“If they could speak, what would germs or viruses call millions of weakened, malnourished people living in overcrowded conditions? Answer: A feast!”

“Understandably, no one listened to me, an obscure environmental scientist and blogger. But you would think they’d have paid more attention to the prestigious and well-connected Rand Institution in 2012 when it warned that pandemics were “capable of destroying America’s way of life.”

“Or maybe U.S. authorities would have and should have been more inclined to lend an ear to Microsoft founder and mega-philanthropist Bill Gates, richest man in the world for much of the past two decades, when he warned in a 2005 TED talk that the greatest risk of a global catastrophe was “not missiles, but microbes.”

“Gates re-issued his warning in another 2015 TED talk called “The next outbreak? We’re not ready,” now viewed by more than 18 million on YouTube.

“The first lesson of the 2020 coronavirus/COVID-19 (SARS-CoV-2) pandemic for Americans and most other nationalities is how little heeded warnings of such predictable catastrophes are – even when amplified by reputable, prestigious sources with large public platforms and considerable megaphones.

“Most ordinary folks are just too caught up in life’s day-to-day travails and pleasures, and most public officials too busy in putting out fires. Thus, neither heeds dire warnings of some sweeping disaster that might (or might not) happen over the next decade (even though it’s inevitable over the next several decades or century) or to invest adequately in preparedness for the future. They (we) all ignore the Boy Scouts’ motto to “be prepared,” and they (we) do so at our common peril.

“The second lesson is that we are in part a victim of our own technological and scientific hubris In the 1950s, dazzled by the stunning advances of antibiotics and vaccines in conquering humanity’s ancient microbial enemies, some in the medical profession had the audacity – now perceived in hindsight as incredibly naïve – to prophesize the imminent elimination of all infectious diseases from the world.

“This led to a certain complacency on the part of society, when all along scientists knew that, 1) Nature abhors a vacuum; 2) Nature is dynamic, not static or stagnant, and 3) organisms evolve. The moment we began throwing antibiotics at microbial bugs was the very moment they began evolving resistance to them. Feeding antibiotics to increase the growth (and profitability) of livestock destined for our dinner tables was not an optimal long-term strategy to manage and integrate food production and public health.

“Third, zoonotic diseases – those caused by viruses, bacteria, or parasites that can spread from non-human animals or wildlife to human beings – are a major threat to Homo sapiens. Some 75% of emerging infectious diseases we face are believed to come from animals. These include the coronavirus at the center of the current pandemic.”

I’ve seen what you’ve seen in my own world travels.  I’ve been tooting my own horn over the past 30 years, to no avail.  Leon, why aren’t America’s leaders connecting the dots?

“This is an incredible irony, because the big picture is that humans and our domesticated livestock (e.g., cattle, pigs, sheep, chickens) are literally taking over the planet.

“As shown in the diagram below from the UK group Population Matters (permission given to republish the graph), based on the research of University of Manitoba ecologist Vaclav Smil, some 10,000 years ago, just before the advent of agriculture, if one added up the weight of all the land vertebrates then living on Earth, the combined population of human beings comprised about 1% of that total weight, or biomass.

“Back then, prior to the Agricultural Revolution, there were no livestock. 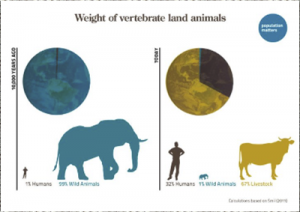 “Nowadays, in stark contrast, humans comprise some 32% of the total terrestrial biomass, and our livestock another 67%, for a total of 99%. In essence, we have replaced all but 1% of all wild birds, mammals, amphibians, and reptiles with ourselves and the domestic animals that we maintain to feed us.”

“At the same time, humans have spread diseases to remaining wildlife populations around the world,” said Kolankiewicz.  “Including the fungus that causes White-nose Syndrome, which has wiped out tens of millions of bats in eastern North America, and chytridiomycosis, the lethal fungus causing a precipitous worldwide decline in amphibian populations. The tiny golden toad of Costa Rica’s cloud forests succumbed to the chytrid fungus only a quarter century after science first discovered and described it.”

“At the same time, humans have spread diseases to remaining wildlife populations around the world,” said Kolankiewicz. “Including the fungus that causes White-nose Syndrome, which has wiped out tens of millions of bats in eastern North America, and chytridiomycosis, the lethal fungus causing a precipitous worldwide decline in amphibian populations. The tiny golden toad of Costa Rica’s cloud forests succumbed to the chytrid fungus only a quarter century after science first discovered and described it.”

“Yet paradoxically, even as wildlife is indisputably disappearing from Planet Earth because of human overpopulation, we humans seem to be more than ever at risk to the diseases they carry. Several factors account for this.

“One factor is the cruel “wet markets” that are widespread in China and other Asian countries, where farmed and captured wild animals such as bats, snakes, and pangolins are kept confined in crowded and unsanitary conditions prior to their slaughter, often right in front of a customer. These hellholes for hapless animals – where the blood, guts, and feces of myriad creatures are intermingled – have been called incubators of zoonotic diseases like the coronavirus. 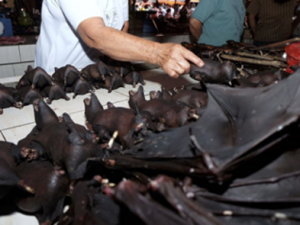 “In the context of the current crisis with the novel coronavirus SARS-CoV-2, The New York Times referred to New York City’s density as its “big enemy” in the fight against the coronavirus, which propagates readily when people are in close proximity to one another.

A final factor is one that NumbersUSA.org supporters are all too aware of: increasing rates of migration and mobility. In Vaclav Smil’s fascinating 2019 MIT Press book Growth: From Microorganisms to Megacities, which Bill Gates calls “Vaclav Smil’s latest masterpiece,” the master ecologist writes that during the “Spanish” flu pandemic a century ago:

“In 1918, the Atlantic crossing took six days on a liner able to carry mostly between 2,000 and 3,000 passengers and crew; now it takes six to seven hours on a jetliner carrying 250-450, and more than 3 million passengers now travel annually just between London’s Heathrow and New York’s JFK airport.

“The current pandemic is perhaps the inevitable outcome of an unprepared, globalized, borderless, overpopulated world. Let’s hope that we’ll learn from the lessons cited here, which are about more than the merits of additional social distancing, ventilators, hospital beds, and personal protective equipment (PPE).

“In addition to all the obvious medical measures, more than ever the world needs borders, population stabilization, and more ethical approaches to our non-human neighbors on this ever-smaller planet.”

After speaking with Leon, I grow more concerned for America’s fate.  Because of our U.S. Congress and its horrid immigration levels of over 100,000 refugees every 30 days, we remain on course to add another 100,000,000 people by 2050.  Again, disease, germs and viruses love “proximity” and “density” of humans or any animals.

Dear fellow American, all great social movements began at the ground level, with “We the people, in order to form a more perfect union….”  Since those jokers in Washington DC refuse to act on the connection and consequences of endless immigration, it’s up to you to force this issue onto the front pages of America.  We need to change course the very survival of our civilization. Get on Social Media and start ranting, writing, suggesting, pushing and moving this issue to the front page of every paper, every TV talk show and onto the radio shows.  I’ve got 50 top immigration-population specialist who will bring the facts and solutions.

So, what are you going to do about it?  Will you sit by and watch as it consumes your children?  Or, will you call your senators and House member to urge them to stop all immigration into America?  Would you like to be around once that next 100 million people lands on this country?  Do you want your kids around when it does?  Do you want to know more and take action?  Join 10 million other Americans of every walk of life to change course:  www.NumbersUSA.org

Leon Kolankiewicz is the Scientific Director for NumbersUSA.org; Before assuming his position with NumbersUSA, Leon spent decades as an environmental scientist throughout the United States, British Columbia, Central America and beyond.