The anti-immigration backlash in France is continuing after a string of violent protests last month with another group of locals protesting over the imminent arrival of around 100 ‘Jungle’ refugees.

French conservative mayors have openly complained that the federal Socialist government’s controversial migrant rehousing plan following the destruction of the Calais ‘Jungle’ camp, and they claim state officials – mainly French interior minister Bernard Cazeneuve – have forced them to provide for hundreds of refugees against the mayors will.

“This kind of thing — the national French government shoving immigrants down the throats of citizens — is something Americans should watch closely. The American press are lying that the civil unrest in Paris stems from a new gas-tax rate. That’s only part of it. They are protesting pay enormous amounts of tax money in order to provide services for illegals and to pay for increases in the criminal population, police overtime requirements and putting strains on the local school systems,” said Colin Feasler, a former police training officer.

Jean-François Peumery, the right-wing mayor of Rocquencourt, an upmarket Parisian suburb near Versailles, told French news outlets: “The news of the mostly Muslim migrants’ arrival has thrown locals into panic, the town is in turmoil. {But] some people say they want to help the migrants settle in, although most locals are incredibly worried and vehemently oppose the rehousing plan.”

Rocquencourt locals fear the ‘marooned’ migrants will “never leave” and the temporary reception center will become a permanent “mini Jungle”.

“They think that the migrants will make the town less safe, trigger a rise in crime and disturb the peace,” said Mayor Peumery.

The mayor, who is popular among voters but disliked by the news media, even launched a petition – which he says gathered upwards of 3,000 signatures – in an effort to block the migrants from being dumped in Rocquencourt.  He claims he was “snubbed” by the government failed to respond to his request. 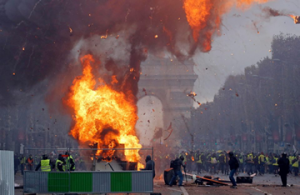 He had also complained the French government gave him no choice, but to organize a protest march in order to be heard.

But the closing of the migrant camp hasn’t stopped Britain-bound migrants from heading back to the border: 10 migrants were arrested near a chemical plant in Calais last Thursday.

About 100 million Americans own approximately 300 million rifles, shotguns and handguns. For the last year and a half the number of firearms purchased by Americans has increased every month.  Tens of millions of our people of all races own more guns than vote for the successful presidential candidate every four years, according to police firearms and law adviser John Snyder, before he died of natural causes last year. 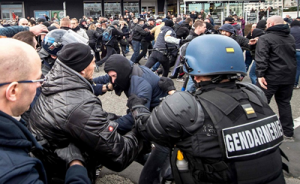